UK's Truss Pressured To Abandon Tax-Cut For The Rich, Throws Kwarteng Under The Bus After Revolt https://www.zerohedge.com/political/uks-truss-pressured-abandon-tax-cut-rich-throws-kwarteng-under-bus-after-revolt 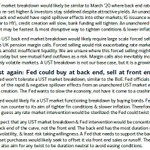 A Saudi-Iran Oil War Could Break Up OPEC

Authored by Irina Slav via Oilprice.com,

When OPEC and Russia shook on increasing crude oil production by a million barrels daily to stop the oil price climb that had begun getting uncomfortable for consumers from Asia to the United States, there was no sign of what was to come just two months later: slowing demand in Asia, ample supply, and a brewing price war between Saudi Arabia and Iran.

Saudi Arabia, Iran’s arch-rival in the Middle East, has been a passionate supporter of President Trump’s intention to pull out of the nuclear deal with Iran and reimpose sanctions. This support is not simply on ideological or religious grounds, it also has a purely economic motive: the less Iran crude there is for sale, the more consumers will buy from Saudi Arabia.

Iran, however, is not giving up so easily. It has more to lose, after all, with the harshest sanctions yet coming into effect in the coming months. The first shots in this war were already fired: Saudi Arabia cut its selling price for oil shipped to all its clients except the United States, S&P Global Platts reports in a recent analysis of OPEC. Iran did the same and has indicated that it is prepared to do a lot more if any other producer threatens its market share. In fact, statements from senior government and military officials suggest that Iran is ready to go all the way to closing off the Strait of Hormuz.

While analysts argue whether Iran’s threats have any teeth, oil demand news from Asia is giving OPEC another cause for worry. Slowing economic growth is dampening oil demand growth and both the Chinese yuan and the Indian rupee are falling against the dollar as a result of the economic developments in both Asia and the United States, whose economy is growing so fast that some are beginning to worry that it will soon run out of steam.

So, OPEC’s internal fractures are deepening and likely to deepen further because Saudi Arabia and Iran are highly unlikely to put down their arms, even if it means cutting prices to uncomfortably low levels. Saudi Arabia could boost its production. According to Platts, it has the biggest portion of OPEC’s combined spare capacity. Iran is not really in a position to do so, what with exports already falling and expected to fall further as the November 4 start of the sanctions approaches. Yet Iran has made clear that it will not stop exporting oil and China, for one, has made clear it will not stop buying it.

China and India, unsurprisingly, are shaping up as the battleground for Saudi and Iranian crude as two of the world’s top oil consumers. While India has suggested that it will try to comply with U.S. sanctions, China has stated the opposite. So, India could up its Saudi oil intake, but whether China will do so will depend on prices. Again, Iran has more to lose, so it might be willing to go further than Saudi Arabia. And the Saudis cannot go too far: they have huge financial commitments under the Vision 2030 reform strategy and they are already extending themselves with major investment projects at home and abroad.

A price war between Saudi Arabia and Iran could effectively put an end to OPEC. Iran has already voiced its strong opposition to the reallocation of individual member quotas suggested by Saudi Oil Minister Khalid al-Falih. According to his Iranian counterpart Bijan Zanganeh, this threatens its market share. Both are expected to attend a meeting of the Joint Ministerial Monitoring Committee that was set up to monitor the production cut deal struck with Russia in 2016. It’s hard to imagine Saudi Arabia assuring Iran that its market share won’t suffer any consequences from its stated pledge to fill any supply gap left by a cut in Iranian exports resulting from the U.S. sanctions. It’s also hard to imagine Iran shrugging and letting this go. Could OPEC be on the way out? Maybe.

A Saudi-Iran Oil War Could Break Up OPEC