Dear friends of the blog, my Christmas wish for you is an invitation: abbracciamoci. Abbracciamoci between us, we can embrace life and embrace even that which we do not like.

I present to you a book written to 18 hands with the help of seven authors, five doctors: Claudio Colombo, Anna Rita Iannetti, Alessandro Meluzzi, Luca Speciani, Giulio Tarro, the writer Fausto Carotenuto and director Silvano Agosti. And with the support of the co-editor Luke Caristina.

When half the world is barricaded in the house, in terror of the pandemic, when the Italy wound has taken the upper hand over good sense, and beauty: closed the schools and universities, died in loneliness for hundreds of seniors, without the tourism, on the pavement of the activities, we wondered what will become of the future and what will happen to the children. The little children, who can no longer be taken in the arm by the teachers, or that they have not seen for months their grandparents because it dominates the fear of becoming infected; the larger that you do not send more pencils and books, or kisses, or caresses. “New sick people to isolation”, I would say, scimmiottando the slogan of the “new normal” that we should accept as a moral imperative.

So we chose to leave a “good memory” of who we are. By inviting the authors to express themselves, a chapter each. And the preface to professor Giulio Tarro. The book is on Amazon, available in 8 Countries. Click here.

In response to the inconclusive rules of the Dpcm – now they are inviting us to flock to the shops, stating that the virus is raging at times and moments; and then, in four days, “the people who move will not be more than two” and “the shift to a private residence will be allowed only once a day” and “who will go to lunch by the grandparents will not be able the same evening to go from the cousins”…

…in response to the madness of this response is the concreteness that has led us here:

let us remember that we are made of encounters, exchanges, smiles and microbes. That we grow up looking into the eyes of the person next to us and that we are transformed together with the people with whom we choose to walk.

A study published this year shows that among the 100 segments of DNA, the most widespread in the world’s population, 80 are proteins modified in the course of thousands of years of adaptation to the virus. Yes: human organizations have embraced the virus, just like we do with the billions of bacteria that make up our immune system. No war, no enemy, but a merger. I thank the epidemiologist Stefano Petti , who pointed me to the work. Click here.

But there is not only this.

As important, an immune system that is balanced, does not make us men or women more aware and more mature. The “distancing” social”, so touted and imposed, is to think about the end of the human being and of the community. As intuited by the philosopher Giorgio Agamben: “The people cooped up in the house to preserve the health are no longer free individuals, are not most people. Are mere survival”.

We wondered if the distancing imposed not preluda to a broader mechanism of global control. To a future of ever more mechanized and less human. Distant from each other, in fact, it weakens, it automates, it is depressing. Is no longer the space to express themselves, nor to give voice to the dissent.

The memory of what we are is well symbolized by hugs and all that this gesture of openness brings with it, from one side of the union, trust, love; on the other, the authenticity, get naked. The get to the heart. Here we find the famous “unwritten laws”, which allowed Antigone to give burial to the brother found guilty by human laws; the ones that make you ask, “what really matters”; the ones that make every doctor, every teacher, but also each one of us, to be faithful to himself.

But it is also, as we said, an embrace that includes everything that we do not like to behave as nature with the virus, which has transformed the “monsters” by making them part of the self. So embrace the fear of the disease, the ineptitude of this government, the illogic of the Aifa that forbids us hydroxychloroquine, and that of Brussels, which has not claimed for us the necessary guarantees before the vaccines are experimental, the spectrum of the deep state and that of global finance.

Not to make war does not mean, however, having fit everything. Or give up to vote, or to take care of or to take the essential precautions to not get sick. It means not to be dominated by “the other”, to strive to initiate change, don’t confuse the end (live well) with the medium (the isolation, and the technology, for example). And choose. Because in front of every thing, good or bad, democratic or behaviour, we will always have a choice. And the answer is our.

Merry Christmas, and heart with a hug. 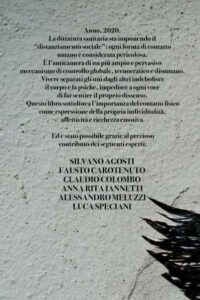 More from Italy's Fight for Freedom:

UK, behold, adverse events and deaths after the vaccine

Vaccines, too many doubts: requested the withdrawal

“And if a vaccine worked is less than another?”

Covid, to be cured may be enough of a cold