We had been reporting China’s February auto sales numbers on a week by week basis, so Zero Hedge readers knew they were going to be ugly for the month. They just didn’t know how ugly.

Industry wide, sales fell 79% in February, marking the biggest ever monthly plunge on record, according to Reuters.

And the industry is starting to panic. Automakers are now asking the government for relief after the industry’s collapse, which occurred in the midst of an already-in-progress global recession for automakers. Specifically, they are asking for cuts on the purchase tax for smaller vehicles and support for sales in rural markets, in addition to the easing of emission requirements. 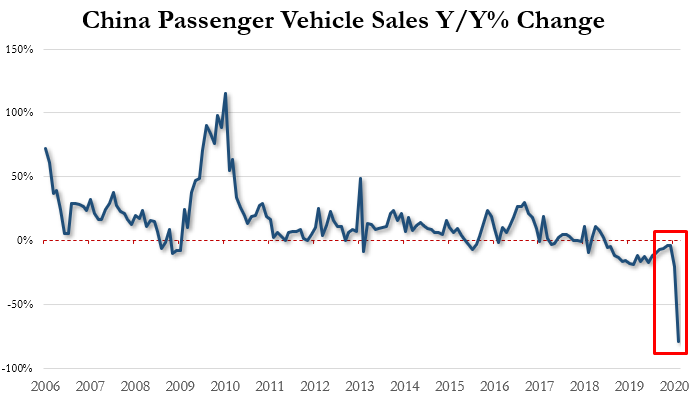 Sales for February fell to just 310,000 vehicles from a year earlier, marking the 20th straight month of declines.

And the once silver lining of EV sales is no longer. New energy vehicles contracted for an 8th month in a row as the CAAM pleaded the government for more subsidies on NEVs.

Yale Zhang, head of Shanghai-based consultancy AutoForesight, said: “The government will consider these proposals but it is unlikely they will launch so many policies. Measures like cuts to the purchase tax, support for rural markets and easing purchase restrictions on new energy vehicles are reasonable and would have an immediate impact.”

Auto makers are also asking the CAAM for improved logistics and the support of a resumption of production in Hubei province, where the coronavirus outbreak began. In Hubei, production for China’s automakers had resumed to about 40% of normal output levels, according to a CAAM survey.

The CAAM predicts sales numbers will “definitely” rebound in March. A CAAM official said last month that sales are likely to plunge 10% for the first half of 2020. Containing the coronavirus outbreak is going to be key in whether or not the industry rebounds, and by how much.

And remember, as production comes back online in China, demand globally will likely be falling off a cliff as other major countries deal with their “Wuhan moments”.