"Wednesday’s shooting comes as Oakland has been grappling with more than two years of elevated gun violence, a rise in violence that began early in the pandemic."

Oakland. Worked there, dated there, lived next door for 10+ years. Likely gang shooting.

Data point from The Trace (confirms our street gang research):

Though Black residents make up just 17 percent of Knoxville’s population, 75 percent of the city’s gun homicide victims in 2021 were Black, and nearly half of Black people in the city live below the poverty line.

The Gun Facts project received a provocative question: “We’ve had a few years of California’s Prop. 63. Can we point to any numbers that show whether the ammo background check law is having the desired effect?”

The answers are: “Yes, we have numbers; no, it didn’t have an impact; but there are a lot of gotchas in the analysis.”

Both New York and California passed laws that require criminal background checks before you can buy ammunition. New York passed their law in 2013 and California in 2017. These two states –The State of COVID and the State of Emergency – passed these measures along with other gun control actions (California, for example, established procedures for enforcing laws prohibiting firearm possession by specified persons), so it is technically impossible to weed out just ammunition retailing as a factor. But we can at least measure aggregate violence stats to see if some major change occurred that could have been instigated by the laws.

There wasn’t; but as you will see, the data is odd and limited on a few fronts.

Ideally, we would contrast both deaths and intentional woundings by guns, but the CDC does not track the latter past 2018, which makes measuring California impossible. So, we rely on the FBI’s homicide data as our proxy. This is imperfect since homicides can be committed using something other than a gun, but guns are the most popular mode of homicide in America (68% of homicides were by firearm in the most recent year that the CDC WONDER database reports), so this proxy is “close enough.”

The big, ugly chart and the numbers that matter 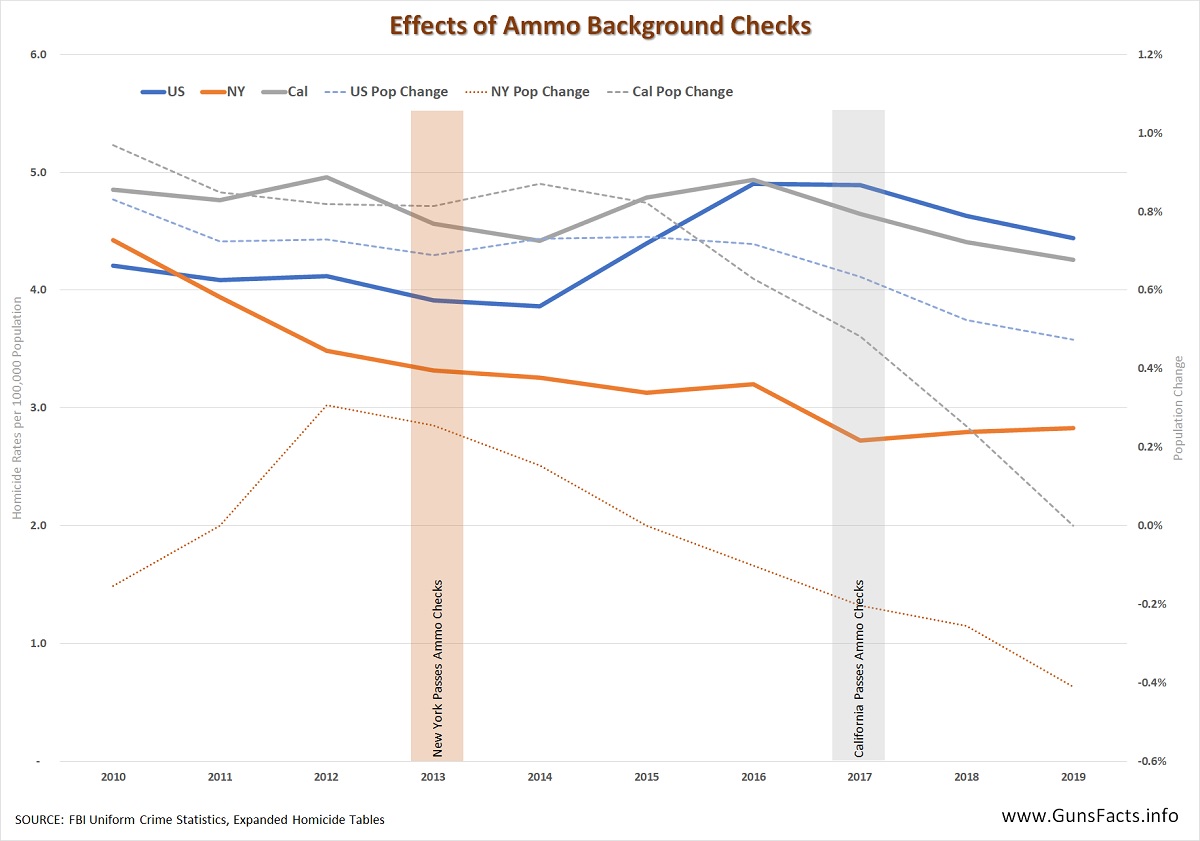 Homicide rates are on the left and in solid lines; population changes are on the right in dotted lines. Sorry if this looks like colorful spaghetti, but we had a lot to look at.


Let’s start with New York since their law has been in effect the longest. Their homicide rate was falling before the law was passed. Indeed, homicide rates were falling faster before the ammo background check law was passed than after (six years on both sides, slope before was -0.16 and after was -0.10). This is doubly odd given that New York’s population fell by 160,000 people after the law was passed, and crime tends to fall with population. The exodus may have mainly been from light crime areas, so we’ll ignore this oddity for now. The fact that the rate of decline slowed after the law passed is the troublesome bit.

However, during their post-legislation period, the US homicide rate (sans New York and California) went up by a significant amount before starting to taper off. It is interesting to note that California echoed this up-and-down trend as well.

Given the population decline in New York (while California and the US were still growing), we have an apples-to-pineapples comparison. A better overall comparison would be the last three years, which (a) encompasses California operating under ammo background checks and (b) incorporates just New York’s population decline (i.e., avoiding up-and-down volatility).

During this 2017 thru 2019 period, we see no differences… anywhere. Using the common R2 covariance measurement – where the range is zero to one, zero being no covariance and one being perfect covariance – we see that New York, California and the rest of the United States had the same rate of change in homicides.

Now, before holding this all as doctrine concerning ammunition background checks, here is the list of limitations on which you would be challenged:

What can be safely said

The three-year comparison shows no variation in homicide rates (R2 near one), and marginally less alignment specifically on firearm homicides (about 0.75). California had different results than New York, which means that there was either a specific variation in the law, or a different variable at play.

All that being said, there was no huge decline in homicide rates compared to the rest of the country, so the laws are likely ineffective.