Michelle Caruso Cabrera, former CNBC anchor, has been trying to engage with her political opponent, Alexandria Ocasio-Cortez, for months now. But for a small online debate that took place in February, it doesn’t look like AOC has any further interest in debating her upcoming political opponent.

AOC has said she plans on skipping face-to-face debates that are scheduled for this upcoming Wednesday. The Parkchester Times-sponsored debate is the same one that Rep. Joseph Crowley skipped before he was dethroned by AOC in 2018, according to the NY Post.

Parkchester Times publisher Sheikh Musa Drammeh said: “Ocasio-Cortez is claiming her incumbency privilege. But if she does the same thing, history will repeat itself.”

It doesn’t look to be a scheduling conflict for AOC, either: the House of Representatives has no votes scheduled for Wednesday and the House Financial Services Committee only has a meeting that will be held virtually. 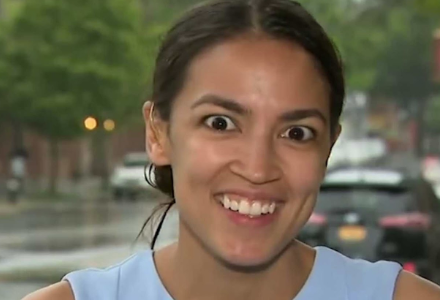 Recall, we noted when things got nasty during an online debate that the two participated in back in February of this year.

MCC accused AOC of staying in her “luxury” apartment in DC (“with a Whole Foods in the lobby”) while her constituents in the Bronx-Queens district are left to deal with the coronavirus pandemic on their own.

AOC responded by saying that MCC once lived in a Trump-owned building in NYC and that her family still has roots in her district, according to the NY Post. “This is where my uncle is. There is where my brother is. This is where my family is,” AOC said.

MCC responded: “AOC says her family lives here. Her mother moved to Florida because the taxes are too high.”

MCC then took on AOC driving Amazon out of New York: “We have to have an attitudinal shift toward jobs. We can’t tell job creators, ‘Go away, we don’t want your 25,000 jobs [referring to the aborted Amazon project].’ I’m never going to do that,” Caruso-Cabrera said.

She also noted that AOC voted against the Covid relief legislation last moth. “It’s what you always do. You’re always working on your celebrity status. No bill is ever perfect. But we have to start somewhere and we had to work quickly,” MCC said.