We wonder why Visa would be cheering on our new cashless future. #gold #liberty

The war on cash has been ongoing, With Covid now an excuse

Cash means freedom. This is a problem in the eyes of many politicians and economists. They want to know what you're spending, with whom you are tra...

The world’s central banks want you to pay more to live. #inflation #tlot

The world's central banks want you to pay more to live. (From Mises) Central banks will often say that these price increases are not due to monetar...

In a new video produced by @FreedomWorks, CEI's @KentatCEI and other regulatory experts discuss the transformation of the nation’s rail sector since the Staggers Act, and warn against efforts to undo its reforms. Watch here 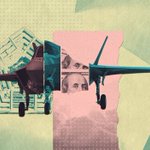 There are few things more crony than the war on drugs.

Democrats and Republicans might be divided on a number of major policy issues, but Rep. Alexandria Ocasio-Cortez (D-NY) said on Thursday that ending the drug war and legalizing marijuana are increasingly standing out as exceptions to hyper-partisanship in Congress.

The congresswoman made the point during a virtual town hall alongside cannabis reform ally Rep. Earl Blumenauer (D-OR), stating that since she took office, it’s been encouraging to see members on both sides of the aisle come together on issues concerning “civil rights policy and civil liberties,” including ending “drug prohibition laws.”

Biden to Nominate CNN Analyst for Secretary of State

liberty aggregatorNovember 24, 2020 at 2:14 am.
Against Crony Capitalism

Andrew Cuomo just WON AN EMMY for his Covid briefings

How the Bidens Dodged the Payroll Tax

Time will tell about this

In sworn statement, prominent mathematician flags up to 100,000 Pennsylvania ballots