10 Republicans Back Bill Calling For Audit Of The CDC https://www.zerohedge.com/political/10-republicans-back-bill-calling-audit-cdc

One Bank Asks How Much Lower Stocks Would Be Without Covid https://www.zerohedge.com/markets/one-bank-asks-how-much-lower-stocks-would-be-without-covid

Looks like Three Arrows Capital is the whale behind the 88 and 12 cryptopunk market buys.
They now have 100 cryptopunks after paying @Mining_DAO 5 ETH to transact each set of transactions all in one block so they wouldn’t get frontrun. 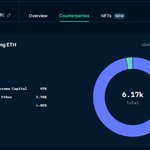 Assad’s “normalization” with both Arab and increasingly international countries who were a short time ago enemies is moving fast. First the embassy of the United Arab Emirates has formally reopened Thursday in Damascus, which is the first time a Gulf country has re-established official relations with the Assad government since all GCC states first shuttered their embassies there in 2012. Related to this and more significant, Gulf nations are now reportedly leading efforts to readmit Syria into the Arab League after the organization expelled Damascus eight years ago when the conflict first began.

At the time the Arab League cited “brutal repression” of protests against President Bashar al-Assad — deeply ironic and hypocritical at the time — given that Damascus pointed out both Bahrain and ally Saudi Arabia violently snuffed out protests that rocked Bahrain’s monarchy in 2011 as part of the “Arab Spring” movement. But the significance of likely rapprochement with Arab states is huge, coming after eight years of war driven by an official policy of Syrian regime change by these very GCC governments, foremost among them Saudi Arabia, the UAE, and Qatar. Restoration of ties also means countries like the UAE could be major sources of financing reconstruction projects at a key moment when the United States has long blocked all western aid that could benefit the Syrian government.

During the final weeks of the UAE embassy’s rapid remodel in preparations for Thursday’s reopening, another first happened: Sudan’s President Omar Bashir became first Arab League leader to meet Bashar al-Assad since the outbreak of the Syrian war in 2011. Bashir flew to Damascus on Dec. 16 to discuss with the Syrian president “situations and crises faced by many Arab countries,” according to an official press release. No doubt they also discussed Syria’s impending re-entry into the Arab League.

Notably, The Guardian paints the most optimistic picture in terms of Damascus’ full diplomatic rehabilitation in the region after years of Arab heads of state and international leaders echoing “Assad must go”:

At some point in the next year it is likely Assad will be welcomed on to a stage to once again take his place among the Arab world’s leaders, sources say. Shoulder to shoulder with the Saudi crown prince, Mohammed bin Salman, and Egypt’s latest autocrat, General Abdel Fatah al-Sisi, the moment will mark the definitive death of the Arab spring, the hopes of the region’s popular revolutions crushed by the newest generation of Middle Eastern strongmen.

Such a speedy turn around signals Arab leaders are ready to acknowledge Assad as the legitimate leader of Syria after emerging victorious as the international proxy war continues to wind down, but also at a tense and sensitive moment as both Israel has vowed to expand its “anti-Iran” military action in Syria and as the United States is current withdrawing troops from Syria’s northeast.

Bahrain, Kuwait, Egypt and Jordan are reopening relations with the Syrian government. This suggests that they are not fighting “Sunnis,” but extremists that they seem to consider common enemies. No longer Sunni vs Shia – but Conservative vs Radical. Or Governments vs insurgents.

Meanwhile both Syrian and international estimates attempting to evaluate to reconstruction costs for the war-ravaged country commonly put the figure at $400bn.

According to The Guardian:

The full sum will probably never materialize and much of Syria is likely to remain in ruins – but Riyadh’s pockets are much deeper than Tehran and Moscow’s. Any forthcoming Gulf reconstruction money will be directed to areas that stayed loyal to the government throughout the war as a reward.

This also touches on President Trump’s Monday tweet, wherein he announced that Saudi Arabia “has now agreed to spend the necessary money” for Syria’s reconstruction, which also raised the question for potential full Syrian-Saudi rapprochement.

The United States has ended the ridiculous 230 Million Dollar yearly development payment to Syria. Saudi Arabia and other rich countries in the Middle East will start making payments instead of the U.S. I want to develop the U.S., our military and countries that help us!

It turns out the president was likely referencing prior commitments, and not newly pledged funds, while under fire from Congressional leaders for announcing a full US draw down from Syria.

According to CNBC, the Saudis have denied the content of the tweet, or that it presents new information:

An official at the Saudi embassy in Washington told CNBC that the kingdom has not made any major new financial pledge to Syria since August. That is when the State Department announced that Saudi Arabia had committed $100 million to a fund to stabilize areas of Syria liberated from ISIS militants by a U.S.-led coalition.

Of course this is a paltry sum out of the $400bn needed, but likely there will be more to come, especially as Russia and Saudi Arabia are bettering relations after Saudi crown prince MbS has essentially been declared persona non grata by the United States and international leaders.

Already we’re set for an interesting start to 2019 considering that in international relations terms, Assad could be on his way “in” at a moment that MbS is on his way out.