Jon Corzine should be at the hearing asking questions

One week after Bank of America’s Benjamin Bowler showed the one indicator that convinced him that another crash is coming, today the equity derivatives strategist doubles down on his bearish outlook and writes that with valuations currently near tech-bubble highs, equity prices imply either a record short recession or that the Fed will buy equities. And since the Fed “is not buying stocks yet and likely only would if pressed by new lows”, this was and remains a bear rally.

As both we and Bowler have discussed previously, while bear market rallies are incredibly common, quick recoveries from high levels of stress coupled with record fast drops in the VIX are unprecedented. 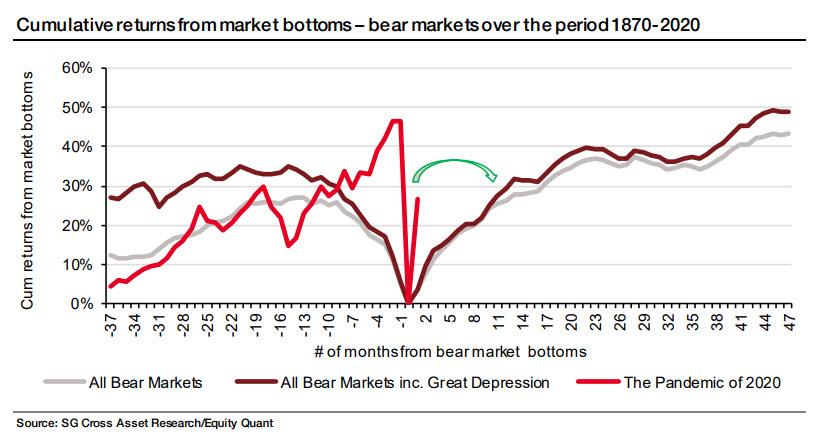 As such, according to Bowler if history is a guide it would not be unlikely for the S&P to rally near 3000 before rolling over and returning to lows, given 1) the size of this shock, and 2) the fact it is coinciding with a recession. In fact, as the BofA trader notes, “if the recent S&P peak on April 29th holds, it would start to look quite textbook.”

Of course, the bull-case is that this time is different due to still light positioning and the unprecedented $12 trillion so in stimulus “which could further divorce asset prices from economic reality.” But the question is how far from reality, as things are already looking quite divorced. Consider that as we first showed last month, the S&P’s forward PE at 20 has only been higher during the Tech Bubble, and BofA’s equity strategists’ 2020 EPS estimate pushes the current PE above 25 – near all-time highs.

Expanding on this point, Bowel notes – as we did one month ago – that forward S&P PE multiples near Tech Bubble highs suggests too much optimism is priced-in, adding that in the 12 months following the market bottoms of the ’87 crash, the Tech Bubble, and the GFC, the average S&P forward PE was 10.3, 16.4, and 14.0, respectively (in all three episodes, the ratio never exceeded 17.2, Chart 7).

In contrast, today’s forward PE is 20.3 (the 90th %-ile since 1986), and BofA’s top-down EPS forecast of $115 implies a higher PE of 25.3. Additionally, S&P earnings uncertainty is not far from the peak levels we saw during the GFC. Historically, stocks typically trade at lower multiples when earnings uncertainty is high as lack of clarity warrants a lower premium (Chart 8). In fact, Bowler has found that “the average forward PE during the most uncertain periods (when earnings dispersion has a coefficient of variation between 15-20%) is only 13.6, far below today’s forward PE of 20.3 (Chart 9).”

In other words, yet another paradox has emerges: in a complete reversal from historical precedent, the forward PE multiple has been rising despite earnings uncertainty climbing to near GFC highs in contrast to history, when higher uncertainty had depressed (not inflated) valuations (not to mention 1/5th of S&P companies already suspending buybacks or dividends).

Furthermore, given the strong relationship between the length of bear markets and that of recessions, a relationship discussed one month ago…

… Bank of America concludes that “equities are either betting on a record short recession (despite forecasts for near the worst in history), or on the Fed buying equities, believing fundamentals don’t matter.”

However, while the Fed has surprised in terms of the lengths it will go, it is far from buying equites and likely would only consider it if pressed by new lows, which means the only way to higher prices would be through a crash first.

Which means that, as Bowler concludes, “there may be a time to co-invest in equities with the Fed, but it will surely be at lower prices.”

In parting, the BofA derivatives strategist has seven points to help readers navigate the new normal in volatility: