Well this is certainly interesting: a 20-year-old had the brilliant idea of using the options market (?) to effectuate a debt reduction for BBBY on July 21... 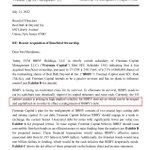 Authored by Ana Alexandre via CoinTelegraph.com,

Tangem, a start-up operating from Switzerland and Singapore, has launched a pilot sale of physical notes of Bitcoin (BTC), according to a press release published May 3.

Tangem Notes, described in the press release as “smart banknotes” with a chip developed by Samsung Semiconductor, reportedly allow consumers to physically carry Bitcoin stored in denominations of 0.01 (about $96) and 0.05 BTC (about $482). The first pilot batch, consisting of 10,000 notes, will be shipped from Singapore to potential partners and distributors around the world.

According to the press release, the idea behind creating physical notes of Bitcoin was in part to increase the ease of spending crypto, “improv[ing] the simplicity and security of acquiring, owning, and circulating cryptocurrencies.”

Singapore has developed a reputation as a hub for cryptocurrency and blockchain development in Asia. Recently, The Singapore Fintech Association and the Fintech Association of Japan signed a Memorandum of Understanding to collaborate on fintech development. Additionally, China and Singapore completed a shipment of gasoline entirely using blockchain technology in early April. In March of this year, Singapore’s central bank reaffirmed its commitment to using blockchain for cross-border payments.