No, the Fed will do that

Texas' Power Grid "Could Be At Risk" Ahead Of Cold Blast 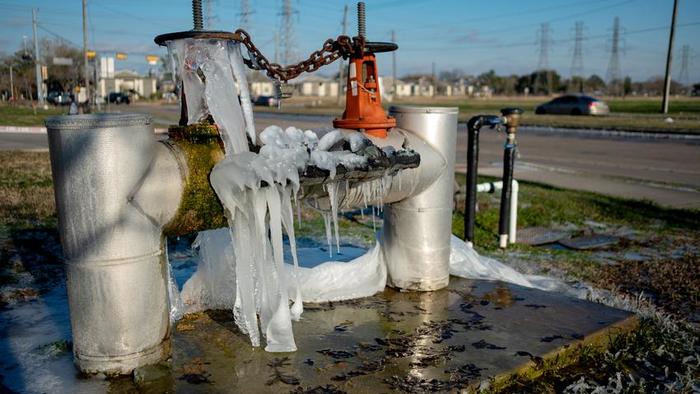 Texas' Power Grid "Could Be At Risk" Ahead Of Cold Blast

"Gas wells are particularly susceptible to so-called freeze-offs because of the high volumes of subterranean water..."

Brexit – Will The EU Collapse Anyway?

It is impossible for anyone who even occasionally visits the news to ignore just how dramatically the world has changed in the last 10 years. The epicentre of the crumbling world order that we have all known was the global financial crisis. It literally shook the foundations of the Western world and the institutions that upheld it – and today they are now falling down one by one. Will the European Union be one of them as its own existential threats continue to mount?

Political systems such as democracy are now known to be failing the world over to some degree or another and all of a sudden, many of us have started to wonder about a world without those structures we took so much for granted. Unfortunately, others have embraced this new found fragility more eagerly than others and with frightening consequences.

It, therefore, should come as little surprise that the past decade has been assessed as a period defined by systemic dysfunction and political change. As we enter the next decade this dysfunction will characterize the momentum of a decade’s worth of disruption and one regional area of change will undoubtedly be the European Union.

There is no point in researching for material in this article with the assistance of the hatemongering MSM rags typified by the likes of the Daily Mail, Express, Telegraph et al. We have looked at many articles, periodicals and predictions – and there has been for some time a growing belief amongst many in the financial and geopolitical environments that the future prospects of the European Union is at best ‘challenging’ but more likely dismal.

In March 2017, TruePublica published a prediction of the near future in “New World Disorder” – an article that took the view there were substantial changes to some of the world’s normally stable institutions and political systems. As for the EU, we wrote:

“With Britain’s recent EU referendum result came the realisation that the rules-based system on the continent had failed. Rising discontent is gathering at an unstoppable pace, much to the alarm of the ruling elite. A federalised state dreamt up by America and handed to Germany with the intention of destroying national identities, borders and sovereign rights are slowly turning into a nightmare as the 28 nation bloc enters what can only be described as a disintegration phase. In the meantime, the EU intends to make it a mistake that the British will regret and fall to their knees.”

At this precise moment, the EU is united in this approach and Britain is indeed preparing to fall to its knees. However, the truth for the future of the EU is not just about Britain where its own prospects look far worse than even some of the most pessimistic had predicted.

A document leaked to Germany’s Der Spiegel last year revealed that the German defence ministry set out what it saw as its worst-case scenario for the year 2040. In it, they predicted that:

“EU enlargement has been largely abandoned, and more states have left the community … the increasingly disorderly, sometimes chaotic and conflict-prone, world has dramatically changed the security environment.”

Der Spiegel went on to say that:

“The journalists to whom the document was leaked have omitted any details of what Germany is planning to do about the EU’s possible collapse and fragmentation.”

That the document exists at all is a sign of the increased tension in the global system, especially within the EU. What is alarming is that within the report, even this scenario is already regarded as ‘over-optimistic.’ The belief from within the German establishment is clear – that the EU will quite simply not survive.

Just a month ago, Politico.eu reported that the French Economy Minister Bruno Le Maire said that Europe is in “a state of decomposition – it’s falling apart before our eyes” – he said. And typical of the general theme in this article, Le Maire spelt it out: “member countries are closing in on themselves, trying to find national solutions.”  Various meetings have since been held between the French and German finance ministers and the reality is that they (and therefore their governments) do not see eye-to-eye. In fact, Macron’s proposals have been flatly rejected, not just by the German political elite but by the electorate.

Business Insider reported back in May that Billionaire investor George Soros publicly stated that Europe is in the midst of an “existential crisis” and it is at genuine risk of ceasing to exist as we currently know it.

Soros effectively argues that some in the bloc have moved so far away from its founding goals that the EU can no longer sustain itself in its current state.

“There is no longer any point in ignoring the reality that a number of European Union member countries have explicitly rejected the EU’s goal of “ever closer union.”

And Soros, like so many, predicts the fracturing of Europe, but not necessarily a collapse. “Instead of a multi-speed Europe, the goal should be a ‘multi-track Europe’ that allows member states a wider variety of choices. This would have a far-reaching beneficial effect.” Since his assertions back in May, just three months ago, the EU project has declined further as populism, protectionism and isolationism has become ever more prevalent in more EU member states.

The London School of Economics recently published an article by European Politics and Policy. Its view is similar in content to many economic forecasts. It concludes that partial exits by individual member states would sap the EU from within. Rather than experiencing a sudden collapse, the EU would instead sink slowly into oblivion.

“the EU might instead suffer a slow decline driven by ‘partial exits’ from aspects of European integration. The best-case scenario may be one in which the EU continues to limp ahead in the years to come, but with many members rather grudgingly accepting it as the least unattractive option.”

Geopolitical Futures is an organisation that charts the course of the international geopolitical system and has accurately predicted the crisis in the EU, the economic decline of China and the re-emergence of Russia. Their view is one of continued erosion of the entire EU project.

Virtually no country will be left untouched by the rising social, political, cultural and economic tensions throughout the (European) Continent. But under this continued instability will lurk a perhaps more troubling development: Germany, concerned with the EU’s disintegration and anxious about the economic calamity it could portend, is going to have to work harder to keep the bloc together.

GF takes the view that the writing in on the wall for the EU. It is suffering from multiple structural problems the elite have fundamentally failed to recognise or deal with effectively.

Europe’s problem is no longer primarily its economy – it is a crisis of trust. The European middle and lower classes have lost faith in the elite’s ability to effectively manage the economy and to understand the cultural tensions that have emerged. Large segments of the population will be disaffected by economic inequality, and there will be little the EU can do about it.

The consequence is the GF forecasts that trust, not just amongst people but amongst EU nations will continue to erode and that friction between them is inevitable.

“What we can say is that our forecast for Europe is one of continuity: National and regional movements will continue to erode the social, political and economic systems in Europe.”

Don’t forget, this prediction is for this year only and has so far been right on the button.

CapX monitors thousands of news sources, blogs, academic papers and think-tank publications to find the most important facts and trends. Their view is just as grim.

“The common thread across all these stalled attempts at eurozone reform is a reluctance on the part of national authorities to pursue genuinely European solutions. What this means in practice is that if and when a new crisis comes, there will be no common European response. Individual eurozone countries will be largely left to fend for themselves while EU leaders, as in the last crisis, seek to make decisions largely on the hoof. The question now is for how long eurozone leaders can get away with it? And the answer is not, perhaps, for much longer. A scan of the horizon suggests it is all too possible to identify the triggers for what could quickly become a eurozone and wider EU collapse.”

That ‘scan’ takes the view that some things are indeed predictable and inevitable and CapX says that the threats highlighted are quite broad but identified currently as; the decline of the Chinese economy, the growing threat of trade wars, current bank indebtedness and sovereign debt. Any one of these structural issues could lead to a major recession. This time, however, the EU would not be able to withstand the economic shock. CapX, a global financial specialist believes the Euro will bring down Europe. And it concludes:

“Brexit was a mere footnote in a much more fundamental period of European upheaval. British negotiators may strain every sinew to get a deal, only to discover the entity they’ve agreed it with soon no longer exists.”

Then there are those who physically backed Brexit with their money on the basis that the European Union was not going to survive.

Jim Mellon stood out among investors in 2016 as a public backer of Britain’s exit from the European Union. And the chairman of the Burnbrae Group forecasted another breakup. Mellon predicts the euro will become a future casualty of a rising anti-establishment tide, causing the currency union to splinter within the next five years.

“Brexit is going to be a sideshow to the problems of Europe that are becoming more and more evident,” Mellon said. “The euro as it stands at the moment is just a very inappropriate mechanism — I give the euro between one and five years of life.”

At this point, there are so many more pieces of evidence, heaps of opinion and predictions as to the demise of the EU. The fact is that the EU27 is indeed going through existential challenges.

This has been brought about through the common themes that cause political change everywhere.

The failure of neoliberal capitalism in Europe is the same reason why we have Trump in America, Brexit and a quarter of EU member states supporting right-wing populists. Immigration and the terrorism it imports is a serious concern amongst the people of the EU. Corporatism, corruption, economic stagnation, a doomed currency, the threat of a calamitous recession are all serious threats as well. But by far, the biggest threat is the electorate themselves who have proved time and time again that they don’t like the fact that the EU is undemocratic.

Any single one of these threats is an existential one and the likelihood of one of them happening is very high indeed and Britain could then be well placed to profit from the disorder that brings!

Brexit – Will The EU Collapse Anyway?