Today's SPR update will be a doozy: whisper of 2MM daily drain

OIL FUTURES EXTEND GAINS, U.S. CRUDE UP BY $3 A BARREL

The european fund liquidation is finally over?

Elon Musk Quietly Fathered Twins With One Of His Executives In 2021 https://www.zerohedge.com/technology/elon-musk-quietly-fathered-twins-one-his-executives-2021

David Stockman On Why The Great Reckoning Has Begun https://www.zerohedge.com/markets/david-stockman-why-great-reckoning-has-begun

With Wall Street consensus expecting nothing from the Bank of Canada today, and even money markets were at beast hoping for a modest easing, moments ago the Bank of Canada “pulled a Fed” when it shocked traders after cutting rates by an unexpected 50bps, from 1.75% to 1.25% (with expectations for an unchanged print), citing the COVID-19 virus as “a material negative shock to the Canadian and global outlooks,” and as a result “monetary and fiscal authorities are responding.”

The 50bps rate cut was the biggest since the financial crisis. 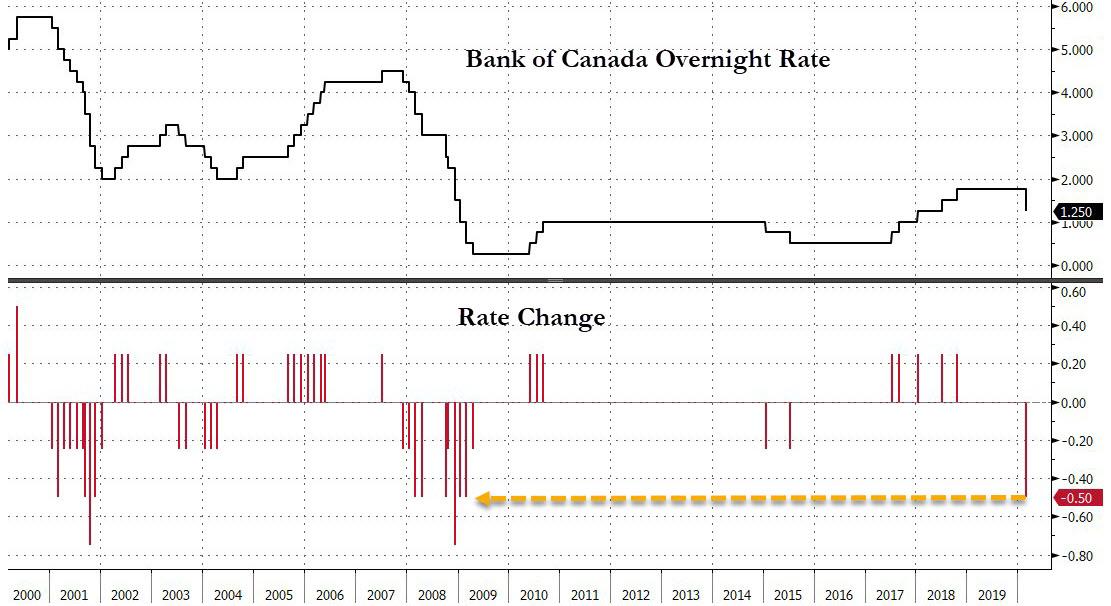 If that wasn’t enough of an easing shock, in an even more foreceful dovish surprise, the bank said that “in light of all these developments, the outlook is clearly weaker now than it was in January. As the situation evolves, Governing Council stands ready to adjust monetary policy further if required to support economic growth and keep inflation on target. While markets continue to function well, the Bank will continue to ensure that the Canadian financial system has sufficient liquidity.

Some more highlights from the statement:

While USDCAD sold off very modestly into the announcement to around 1.3330, it then spiked higher on the 50bp cut to 1.3415.

And with the central bank now clearly in dovish mode, the OIS is pricing in over 50% chance of an additional 25bps cut in April as the entire world sinks into a Japanese trap.