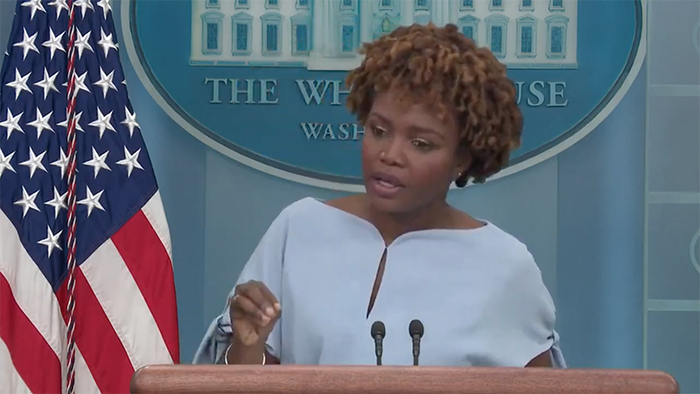 “...we're not going to talk about alleged materials from the laptop... I refer you to his son’s representatives.”

Minutes: "The manager noted that, if ON RRP usage continued to rise, it may be appropriate at some point to consider further lifting the per-counterparty limit. Over the longer term, ON RRP usage was expected to fall."

Alas it just keeps on rising

FOMC TL/DR: we will keep hiking until the recession

"the Committee's credibility... had been helpful in shifting market expectations of future policy and had already contributed to a notable tightening of financial conditions that would likely help reduce inflation pressures"

Trump-hating Canadians flooded the Yelp page of a restaurant with one-star reviews after a manager was fired for ejecting a man wearing a “Make America Great Again” (MAGA) hat, reports The Hill.

Canada’s NBC News reported that former manager Darren Hodge, who had worked at the Teahouse in Vancouver’s Stanley Park for 18 months, told the customer that he would not be served unless he removed his MAGA hat.

“As a person with a strong moral backbone, I had to take a stand against this guest’s choice of headwear while in my former place of work. Absolutely no regrets,” the former employee told CBC News.

The restaurant owners, meanwhile, say that the manager was fired because their actions “did not align with their policy of hospitality and inclusiveness.”

“[He] was aware what he was doing was probably contrary to our values and our philosophy as a company,” said the restaurant’s general manager.

Angry Canadians were having none of it. A few of the one-star reviews:

Oddly, Yelp hasn’t removed the politicized reviews as they often do in similar situations.

The MAGA hat, at this point, might as well be a swastika. If @The_Teahouse is good with that type of customer, well, enjoy em I guess. https://t.co/vE4PVdZdes

The “damned if you do, damned if you don’t” situation the Treehouse finds itself in follows an incident at a Virginia restaurant last week in which the owner of the Red Hen kicked out White House press secretary Sarah Sanders.

In that instance, Trump supporters flooded the Red Hen website with one-star reviews – which Yelp, in a statement, told the Red Hen it was actively working to remove.

We wonder if the Treehouse will receive the same support?