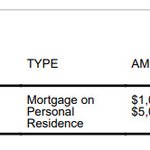 @RudyHavenstein @OccupytheFeds Well..what jumps out at me is...why does a FED Governor feel compelled to have a material ownership interest in and income from multiple "Asia Group" LLCs. (pg 7 & 10), a DC consulting firm, where value and amounts are not disclosed?..probably nothing

Narrator: no it didn't

Days after the flurry of attempted mail bombings had appeared to quiet down after federal agents arrested Cesar Sayoc, the suspected crazed bomber who sent roughly a dozen bombs to the Clintons, Obamas, George Soros, CNN and others, a third suspected bomb sent to CNN has been intercepted.

CNN said in a statement Monday morning that another mail bomb had been sent to CNN headquarters in Atlanta, but had been intercepted at a nearby mail processing facility. Jeff Zucker, the cable news network’s president, reiterated that all mail is being screened offsite.

“This morning, another suspicious packaged addressed to CNN was intercepted at an Atlanta post office,” CNN president Jeff Zucker wrote in a memo to staffers on Monday morning. “There is no imminent danger to the CNN Center.”

The news prompted Zucker, who last week blamed Trump for encouraging the bomber before his identity was publicly known, to issue another warning.

Another suspicious package addressed to CNN has been intercepted. This time in Atlanta. All mail is being screened off site. Note from Jeff: pic.twitter.com/I6TXSkoluQ

It’s unclear whether this package was possibly delayed following Sayoc’s arrest last week, or if this one was sent by a ‘copycat’ bomber.

Sayoc is due to appear in court Monday afternoon. He is facing federal charges and could serve up to 48 years in prison. We now wait to see if Zucker will double down on his claims that the bombings are effectively Trump’s fault.