Members of the DC National Guard who responded to protests in the nation’s capital over the death of George Floyd have tested positive for coronavirus, according to McClatchy, citing a spokeswoman for the Guard, who did not elaborate on how many members were infected. 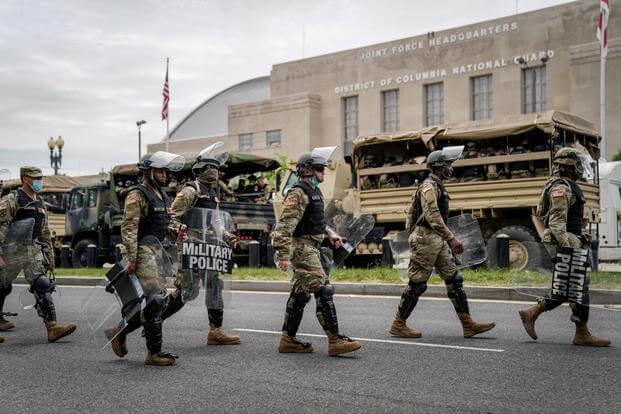 1,300 members of the DC National Guard were called up on May 31 to help law enforcement respond to riots in the area, and were reinforced by nearly 4,000 additional members from a dozen other states.

“We can confirm that we have had COVID-19 positive tests with the DCNG,” said spokeswoman Lt. Col. Brooke Davis, adding “The safety and security of our personnel is always a concern, especially in light of the COVID-19 era.”

The news follows reports that two members of the Nebraska National Guard who were activated in response to protests in Lincoln, Neb., have also tested positive.

According to the report, members of two National Guard units from Missouri and Mississippi were not wearing masks – while any Guardsmen who tested positive will be delayed from an expected Wednesday departure from the city.

“All Guardsmen who are suspected to be at high risk of infection or have tested positive for COVID-19 during demobilization will not be released from Title 32 orders until risk of infection or illness has passed,” said Davis. “Members of the Air and Army National Guard with no, or low risk of exposure, who present symptoms of infection one to 14 days after release from orders will contact their unit.”