The wall has been breached, the castle will fall.

Which came first, the crime or the guns?

Statistically, crime rates appear to precede gun sales … and for some obvious reasons. 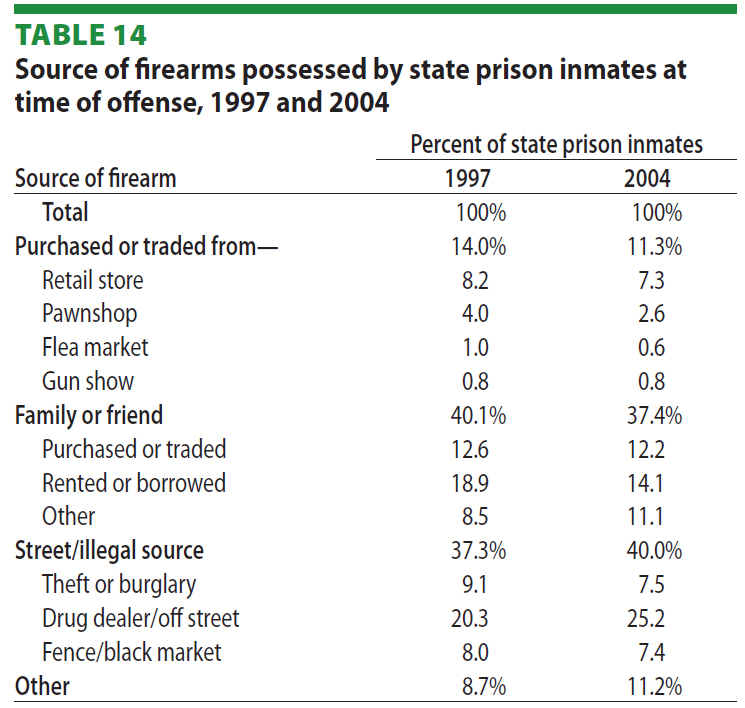 For decades, the Bureau of Justice Statistics (BJS) has produced this chart. Only 11% of crime guns come from retail, so any increase in guns sales in any given year or locality will only result in a fractional immediate increase in gun crimes. Multiply this by the average of eleven years between the retailing of a gun and its use in crime (“time-to-crime”) and the rate of retailed guns affecting crime rates becomes small and rather silly.

But this doesn’t keep some activist groups from claiming that it is so.

They trot out tables showing correlations between gun sales and crime in various cities or states before saying “AH HA!” Then, the opposition camps say, “Maybe gun sales go up in response to crime,” and the first group goes oddly silent.

At the Gun Facts project, we like to go a level or two deeper. In this case we grabbed firearm homicide data from the Centers for Disease Control mortality databases, and gun background check data from the FBI. What we discovered was slightly untidy, but nonetheless interesting.

We did a simple regression (R2) for each of the states and the District of Columbia (DC) and discovered that about 29% of states had a significant correlation between gun sales and firearm homicides (regardless of which led or lagged). The flip side of this is that 71% of states really don’t have a measurable problem.

One problem we had was North Dakota. Sure, it is barren, cold, and unromantic, but the real problem with North Dakota is that it didn’t have a high enough firearm homicide rate to be reliably reported for most of the study period (1999 thru 2016). So, though they are #1 for a correlation between gun sales and gun murders, we have to remove them from the detailed analysis as they cannot present reliable trending insights. We’ll note in passing that the fracking boom in the Dakotas has driven crime and gun sales higher in recent years as hordes of newcomers and transient workers invaded Sioux territory… before surrendering their paychecks at the Indian casinos there.

Since we see some significant raw correlation, the natural question is which one, gun sales or crime, preceded the other. The answer is, “No contest… people buy guns in response to crime.”

Looking at states where the raw correlation is 0.5 or higher (which means that at least 50% of the instances could be explained by their association), we see that 85% of those states saw crime preceding gun sales over all of either one-, two-, three- or four-year lags (e.g., gun sales went up after crime went up in any of the following four years). Contrarywise, only 56% saw a four-year span where on aggregate gun sales started going up before crime did.


This might be compelling enough, but amalgamating four-year spans can hide things, so we spread the data out and color coded it for clarity’s sake. The table below shows states with the crime-leads-guns and guns-lead-crime situations in red where R2 values were at least 0.75, and yellow for the next quartile with R2 values of 0.5–0.75 (we also shaded the 0.25–0.5 group, though we are sinking in correlation values therein). 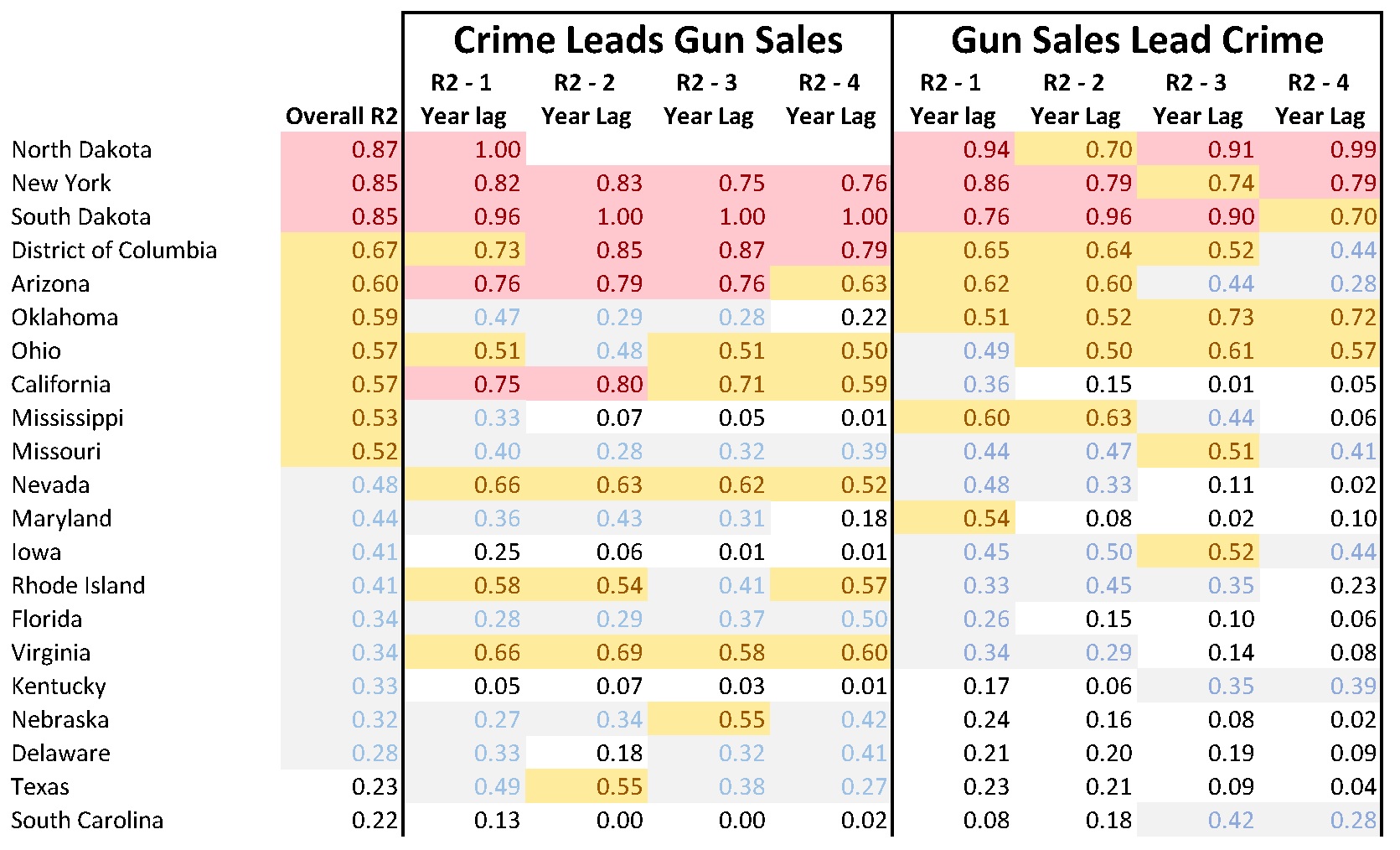 One can visualize quickly the disparity. If we move marginal one-year exceptions for DC and Arizona, then we see four states that consistently have crime leading gun sales regardless of the lead/lag span, when we look at those with very high raw correlations (0.75 or higher). But the situation becomes muddier when we drop that number to 0.5, with yellow dominating the “guns lead crime” upper end. 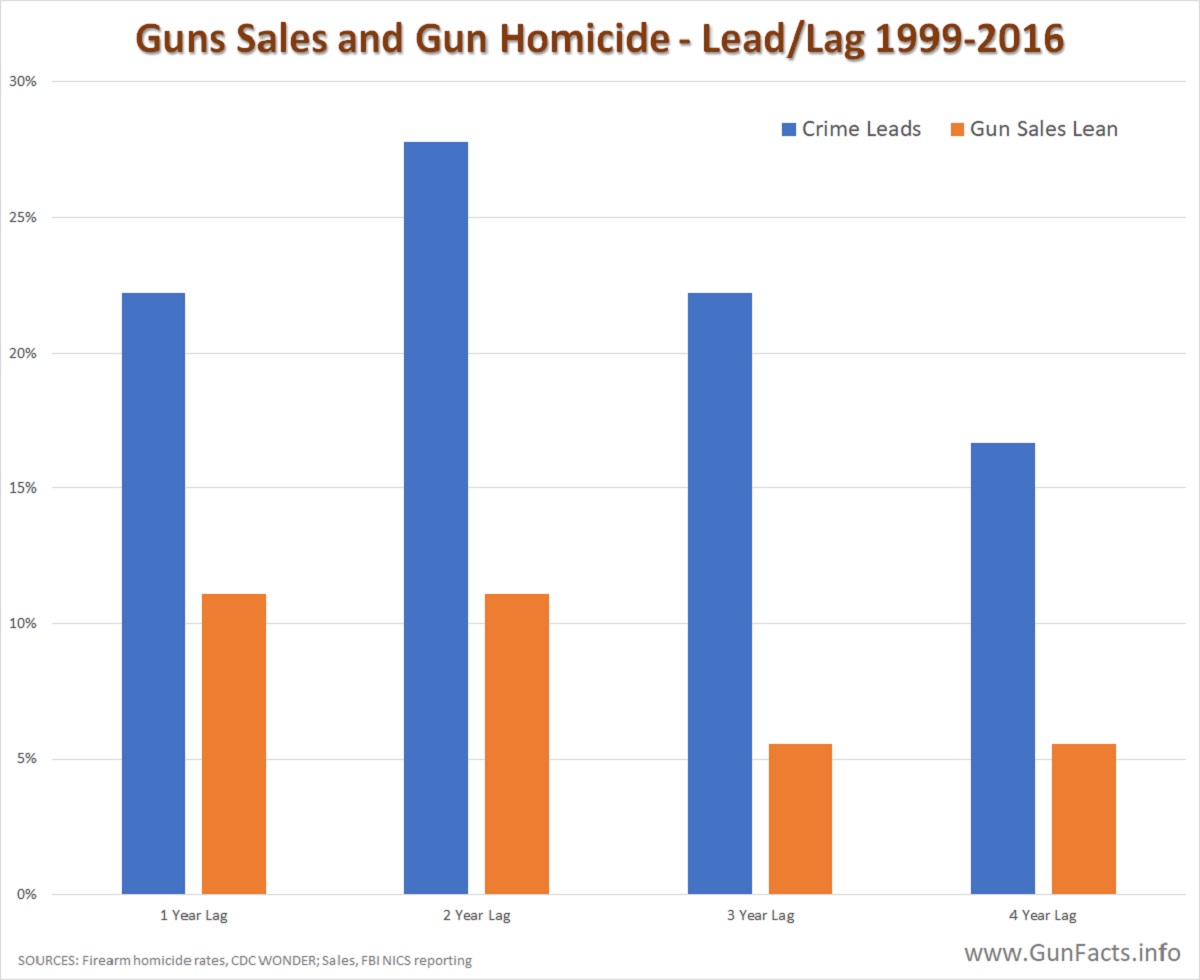 A better way to look at it is to focus on where the correlation is highest. This gives us a cleaner view, and we see that for every lead/lag interval, firearm homicide rates lead per capita gun sales rates. The split is quite consistent, with lead/lag intervals starting to fade after the third year.

Firearm homicides are the worst of gun crimes and may be a good proxy for other gun crimes. That’s for another day.

But for now, it is safe to say that there is statistical evidence that people buy guns in response to crime (real or imagined) and less likely that new gun purchases lead to gun homicides.