If Washington, D.C. is an indicator, criminal justice reform should start with reforming criminals. A recent dive into gun homicides in the nation’s capital shows that gun violence there remains a street gang problem, as is the case in most metro areas.

Guns in D.C. after decades of banning guns

Let’s start by noting that D.C. is the per capita murder capital as well as the nation’s capital. 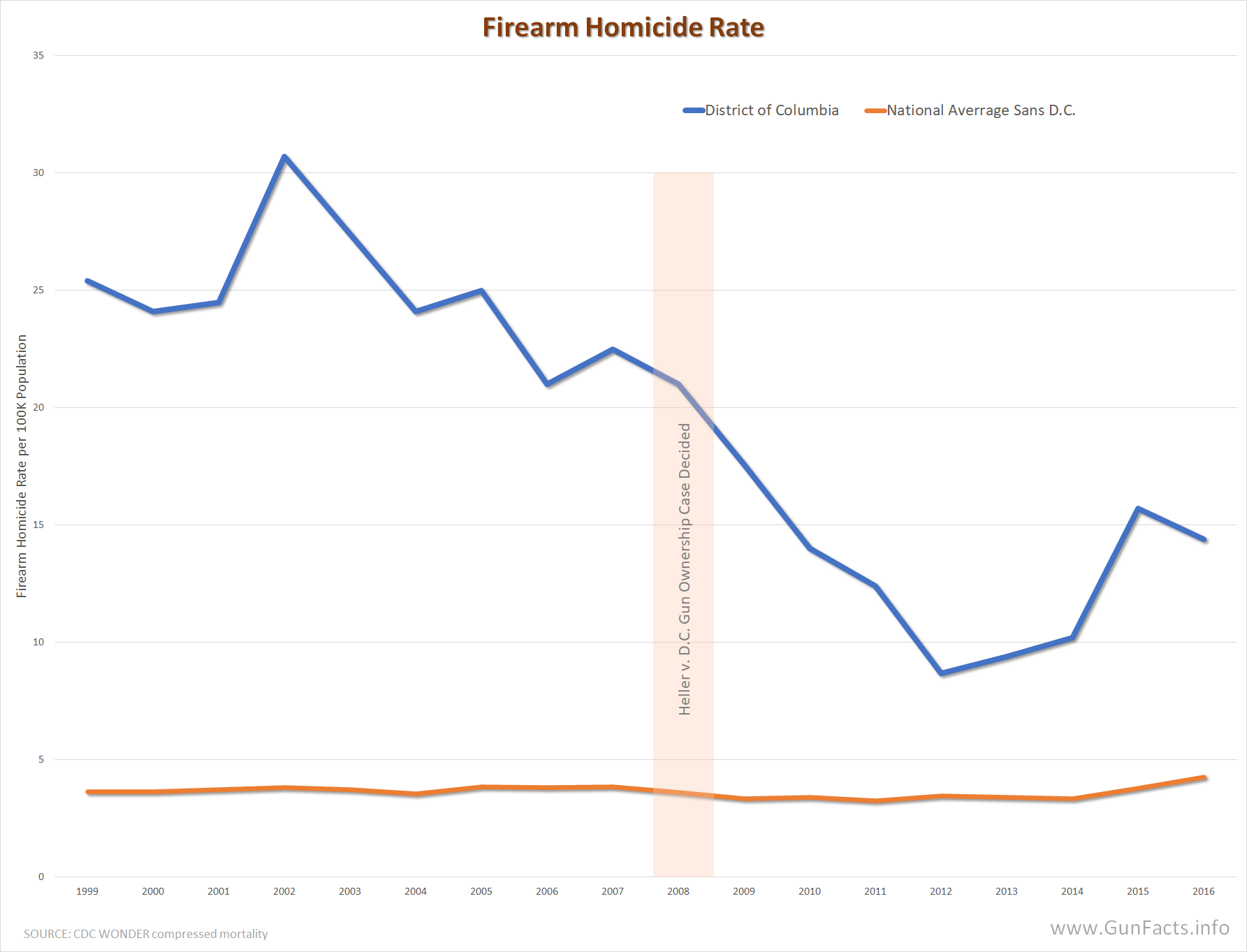 In the most recent CDC reporting year (in their most useful database), D.C. had a firearm homicide rate of 14.4 victims per 100,000 residents. Two of the “swamp states,” Alabama and Louisiana, come in high (9.3 and 11.2 respectively) but are significantly lower than D.C. The average for all non-D.C. states is 4.3, including the mosquito-ridden states just mentioned (ED: Yes, we know D.C. is not nor should be a state, but we’re streamlining the language for the sake of our worn-out keyboards.)

Though there is no supporting cause-and-effect evidence, it is interesting to note that D.C.’s gun murder rate switched from a downward drift to a steeper drop when the Supreme Court said that outlawing gun ownership in D.C. was unconstitutional.

A recent study 1 dug into firearm homicides for all of 2019 and 2020. Normally we at the Gun Facts project would reject studies that included the first pandemic year, which was also the year of the George Floyd riots, but since this is (a) not a time series study and (b) only documents the statistical homicide factors, it is worth a read. 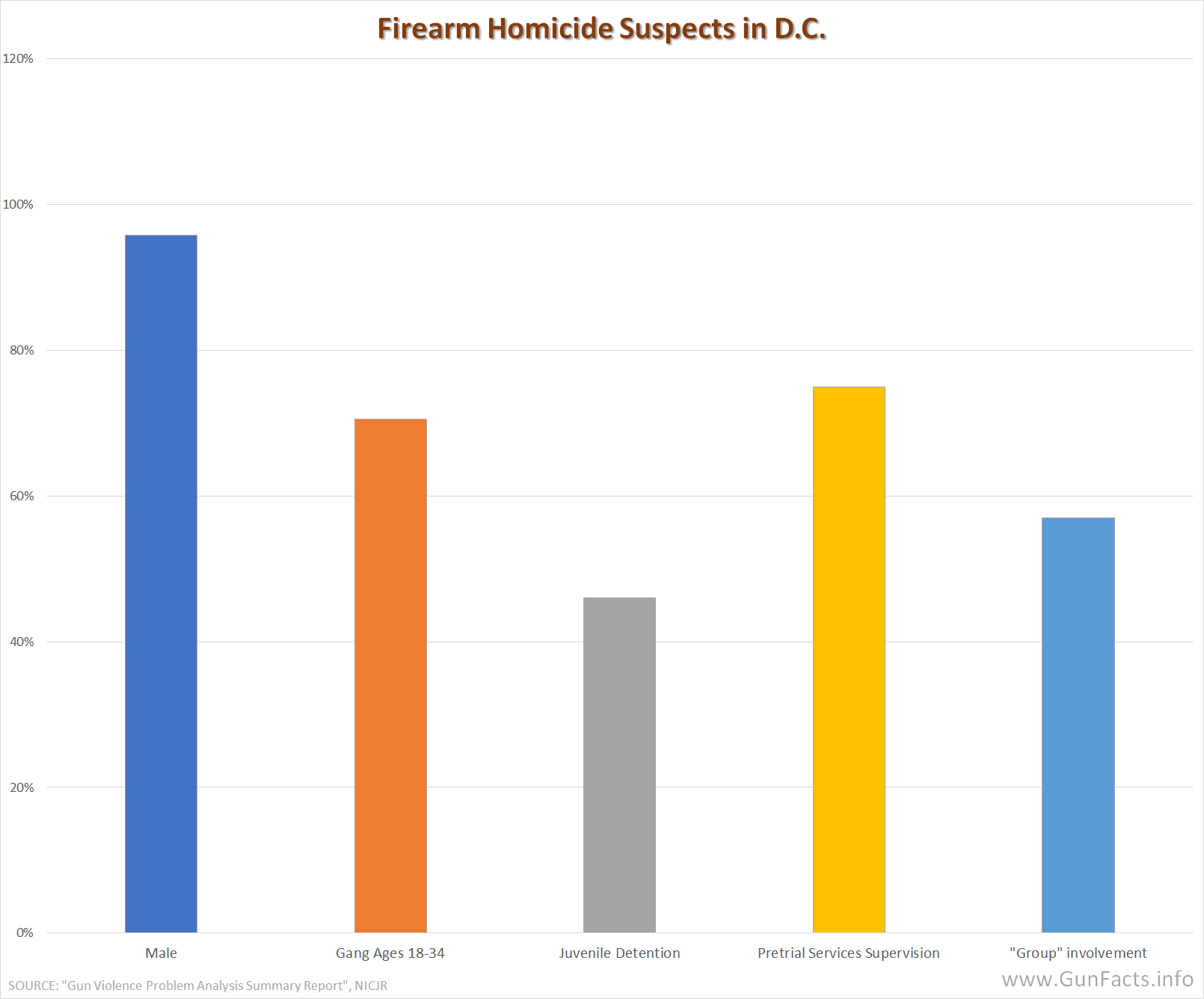 The most important aspect of this study was the demographic and criminal justice system tallies. Neither are encouraging.

As seen nationally, most firearm homicides are committed by males in age groups that the National Gang Center notes are primarily gang activity years (though the age bands traditionally extend from ages 14 to 30, we’ll use the bands in this report covering 18 through 34).

The report notes that 57% of the suspects were involved in “groups,” a handy euphemism for “gangs.” But this tally is per law enforcement determination, not admissions by the suspect. And there are additional people who are gang members, and those who are not actual gang members but are aligned with one or another street gang. Thus, the “group involvement” statistic is likely low.

A serious concern is the judicial system, which appears to have a weak effect on reforming criminals. Nearly half of suspects had been previously incarcerated, 39% were at one time or another under juvenile supervision, and about 14% were under judicial supervision when they committed the homicide. To quote the study, “at least 76% of homicide suspects had active or prior supervision.”

Now, if previous encounters with the law were for minor offenses such as petty theft, we might be lenient on the justice system. But on average, each suspect had more than one previous “armed violent” offence, one non-violent firearm offense (e.g., carrying or felon in possession), and more than two strikes for unarmed violence. In other words, despite their prior armed and unarmed violent tendencies, they were back on the streets and killed someone.

Repeating What Criminologists Have Said

“This small number of very high-risk individuals are identifiable, their violence is predictable, and therefore it is preventable.” This is not a new insight. Repeat offenders are common. Sundry studies have pegged a typical street gang homicide suspect as the lead suspect in 2–3 other homicides, and they may have been involved in more but there is no strong evidence.

The primary public policy point has, for decades, been to identify and incarcerate known bad actors so that they do not commit more murders or pass along their violent tendencies to others.