Discovery will shut up the conspiracy theorists

Conspiracy theorists and plaintiffs’ lawyers are trying to concoct an absurd story from regular-way communications among Citadel Securities and the brokers who handle orders for retail investors.

This will surely shut up the peasants

There are those who still refuse to believe an American landed on the moon.

Internet conspiracies and Twitter mobs try to ignore the facts, but the fact is that Citadel Securities was the pre-eminent market maker to the retail brokerage community in January 2021.

Goldman on XOM - "we see net debt rapidly reducing at our above-consensus oil price view even if capital spending will likely need to move to the upper end of the $20-$25 bn range given inflationary forces in a higher energy price regime." 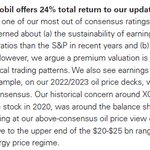 David Stockman: “NATO Is Obsolete; We Should Get Rid Of It”

Authored by Adam Dick via The Ron Institute for Peace & Prosperity,

“NATO is obsolete; we should get rid of it.”

Brzezinski followed up, asking, “are you saying that we should pull out of NATO?”

He then provided a rundown of some of his reasoning:

“NATO’s obsolete. It was only set up to stop the Soviet Union with 50,000 tanks on the Warsaw front. That ended 25 years ago. We don’t need NATO.

Europe can take care of itself. Russia’s a pint-sized economy – seven percent the size of the US economy. NATO-US GDP combined is 36 trillion. Russia’s is 1.5 trillion.

You think the Europeans can’t handle it? Germany spends one percent only of GDP on defense. If they really thought that the Russians were heading through the Brandenburg Gate, they would be providing for their own defense.

In response, Brzezinski said the Morning Joe show will need to invite Stockman back to talk more about NATO, commenting “there might be a few people who want to debate you on that.” Hopefully, that does happen. It would be good TV.

Stockman, who was the director of the Office of Management and Budget in the Ronald Reagan administration, also discusses in the interview the American economy, calling the stock market “way overvalued” and warning a recession is on the way.

David Stockman: “NATO Is Obsolete; We Should Get Rid Of It”