Important update from attorney Rick Jaffe on CHD's lawsuit against the University of California for mandating flu shots for all faculty, staff, and students. 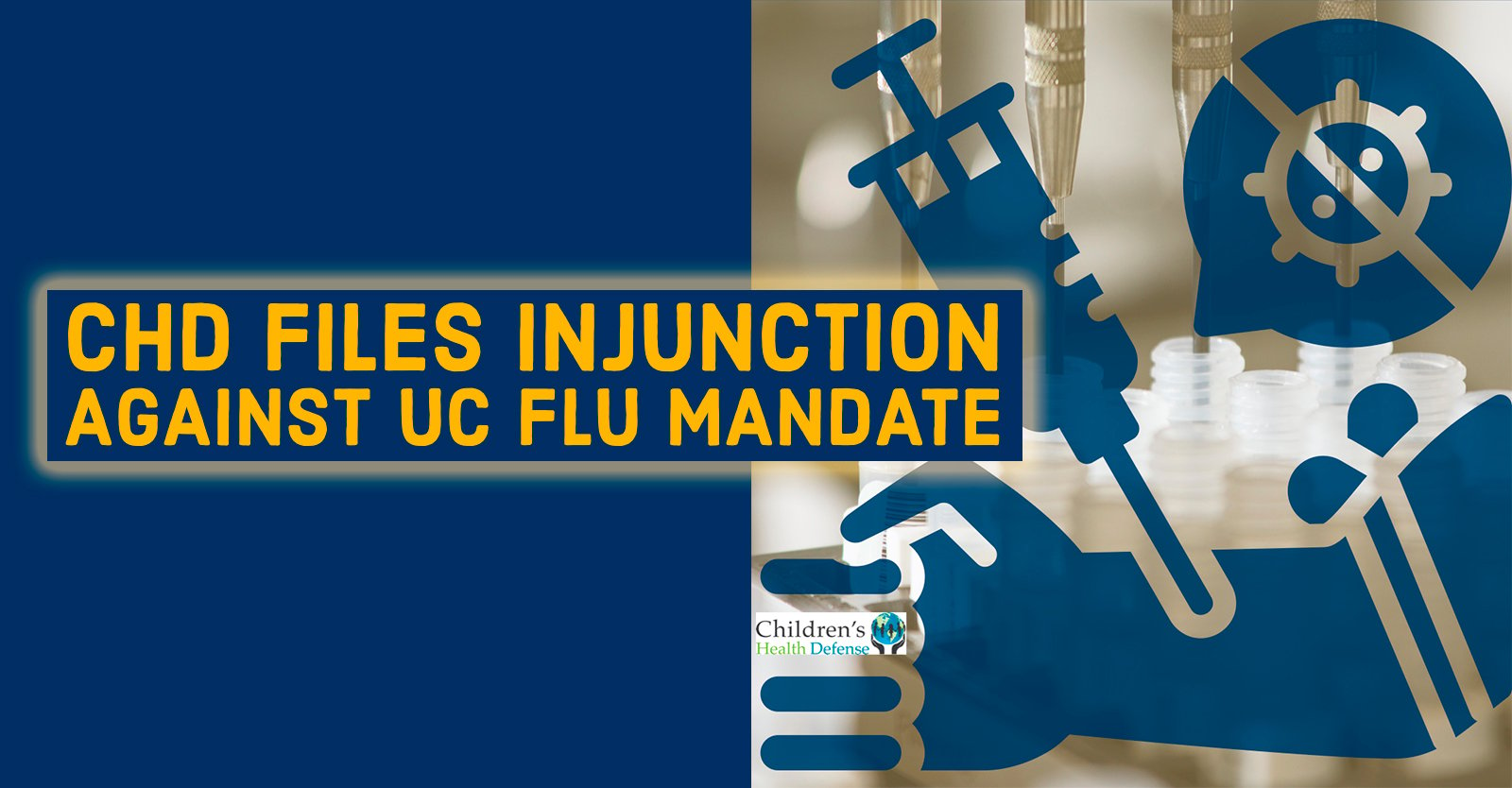 Hearing is set for October 14th at 1:30 p.m. Update by Rick Jaffe, Esq. Today we filed a motion for a preliminary injunction to stop the enforcement o...

All pharmaceutical companies that make vaccines should be under scrutiny especially since they cannot be held accountable if their products injure or kill people.
https://www.nytimes.com/2020/09/19/health/astrazeneca-vaccine-safety-blueprints.html

The article concludes: When all this is over, we may well find that the biggest international variable isn’t the number of preventable deaths. It is the damage to the living.
https://www.msn.com/en-us/news/world/sweden-shows-lockdowns-were-unnecessary-no-wonder-public-health-officials-hate-it/ar-BB1904YN?ocid=ob-fb-enus-580&fbclid=IwAR2arIcqNsTb4n9XuZvW3hfsmOPq-gO4cCD236EQxOKgYE03kFmn4H34IqY

Big news from BMJ! "We have really shown
that this is a true immune memory and it is derived
in part from common cold viruses...Could pre-existing immunity be more protective than future
vaccines? Without studying the question, we won’t know."
https://www.bmj.com/content/370/bmj.m3563

David V. Goliath: An 11 y/o is on a Mission to Educate About 5G Harms and Protect his Mom

David, an 11-year-old from Idaho, first became aware of wireless harms through his mother Robin’s microwave sickness. What started out as headaches and nausea turned to vertigo and migraines until one day David found his mother lying on the floor in the midst of a heart attack. He was nine years old at the time.

After being rushed to the hospital, the cardiologist working with Robin assured the family that there was no problem and that Robin’s heart was very strong for her age. The family continued to see a string of other doctors who all said the same thing: “No problem.”

It was David’s father who first made the connection to wireless harms. An Air Force veteran, David’s father was working at the Dresden nuclear facility where he realized his wife’s symptoms matched signs of radiation sickness. Robin has since been officially diagnosed with microwave sickness by Dr. William Rea of the Environmental Health Center in Dallas, Texas.

The family hired an EMR mitigation professional who assessed their home and helped them remove the Wi-Fi, DECT cordless phones, and dirty electricity. But it wasn’t enough. At the time, the family was living between nine cell towers with a high power line a block away. Unable to live in such an EMR-saturated environment, the family moved into a steel storage unit in an industrial park, and later to the mountains of Idaho.

Unfortunately, 5G deployment was not far behind. 5G antennas entered their neighborhood this past December. Today there is a 5G antenna erected near either end of their trailer—and Robin’s symptoms are increasing again. Idaho’s 5G antennas use a frequency of 600MHz which can travel hundreds of square miles.

From the start, David has been his mother’s self-professed “greatest advocate.” His specialty is to frame mind-boggling concepts into a series of simple facts. In Illinois, he prepared a speech on wireless harms for his county’s 4-H competition on 5G and associated wireless harms. He also created a presentation board reviewing the book Radiation Nation by Daniel and Ryan DeBaun.

The response was disappointing to say the least. Although David came prepared with studies, books, and charts, only one family stopped by after his presentation to check out the materials. While he was awarded “1st Alternate,” the judges decided not to move David’s project to the state level because it was “too scary.”

Since then, David has continued to actively raise awareness of wireless harms. In Minnesota, he gave a presentation with Dafna Tachover, CHD’s Director of 5G and Wireless Harms Project. More recently, David has spoken against 5G to Bonner County’s Republican Central Committee as well as Sandpoint’s mayor, Shelby Rognstad.

“What I find most surprising about the 5G crisis is that industry-sponsored studies show the technology to be safe,” says David, “while independent studies of 5G show clear proof of harm.”

When asked what his goals are in this area, David says, “Finding a place to live and building a home. That’s the main goal for me and my family right now.”

How many of you have a smart home? If you do it is an unhealthy home. What if I told you ALL biological life here on Earth is in danger and that this danger is something you cannot see, hear, taste or feel unless you’ve become sensitive to it? Have any of you wondered about the massive die-off of the world’s bee population?

Our world has had one significant change that I would like to mention, and it has occurred within the last 125 years, that change is man-made radiation from electricity. From your cell phone to nuclear subs, radiation is permeating our planet affecting ALL biological life and the accumulative effects will continue to cause harm with the introduction of 5G.

You may ask, “What is 5G?” To put it bluntly, 5G is solely for the purpose of machines, not biological beings. Those who sing its praise say it will usher in a new age for the Internet of Things, or IOT by connecting all wireless devices. This Internet of THINGS, NOT BEINGS, should give us pause because it is being deployed without the public’s knowledge, and its implementation is going against the proven warnings from doctors and scientists alike worldwide whose main concern is the damage to our health from the accumulated exposure to this radiation.

The people who push 5G care about money and control. Consider this fact: 5G has NOT been shown to be safe, but then again 4G, 3G, 2G, our smart meters, and cell phones haven’t been proven safe either. In fact, quite the opposite!

Think about the hundreds of thousands of deaths from smoking, asbestos, mercury, PCBs and lead paint all said to be safe at one time. Unlike smoking, there is no way you can get away from the radiation we are being exposed to daily. Some say 5G will be great, but for who? Are we just going to take THEIR word for it?

Scientists have shown that there is extensive cellular damage from microwave radiation at levels far lower than what it takes to heat tissue. We are surrounded by radiation in and outside of our homes from baby monitors to cell towers, even our cars are drowning us in damaging radiation. 5G will put millions of radiation-emitting cells on our buildings, bus stops, and street lights. These mini cell towers will even be put in our front yards! Would you want this in front of your home?

A newly published study out of Israel clearly shows 5G frequencies will affect all biological beings. In 2017, more than 180 doctors and scientists from 35 countries around the world presented a scientific appeal stating the deadly effects from this radiation. It has been scientifically proven repeatedly that there is a link between wireless radiation and a host of serious illness. Unfortunately, people who start to succumb to the effects are often misdiagnosed; in many cases, their symptoms are deemed hereditary when it could clearly be shown to be environmental. We are all different and because of this our symptoms are also. Look at Lyme disease to see how varied the reactions are, so to with radiation. For some it may simply start as headaches and or fatigue, for others it may be ADHD, but as the gradual accumulation of radiation continues, the individual symptoms will become more pronounced and health issues pile on top of what your body is already expressing. At some point, all those symptoms could become life threatening. Each and every one of you sitting here today is being affected, right here, right now. So the question I would like to leave you with is this: What are you going to do about it?  Thank you.

CHD’s EMF Child Ambassador Program aim is to both highlight and involve youth in educating their communities on wireless harms. Youth can often reach communities more effectively by being inside them. People are more likely to learn about a classmate’s science project than happen upon a wireless safety manual. Children and teenagers have opportunities to spread awareness from the ground up and reach the peers in ways adults cannot. We want to help children to make their voices heard and to encourage them to take a stance on this issue that affects their health and lives. We encourage children to make their science project on this issue, to speak to their legislators and schools about the harms and to help those who have been injured already and share their stories. Malala Yousafzai said it best: “I used to think I had to wait to be an adult to lead. But I’ve learned that even a child’s voice can be heard around the world.” If you are interested in helping me create change, please email Ysobel Gallo.

The post David V. Goliath: An 11 y/o is on a Mission to Educate About 5G Harms and Protect his Mom appeared first on Children's Health Defense.

David V. Goliath: An 11 y/o is on a Mission to Educate About 5G Harms and Protect his Mom