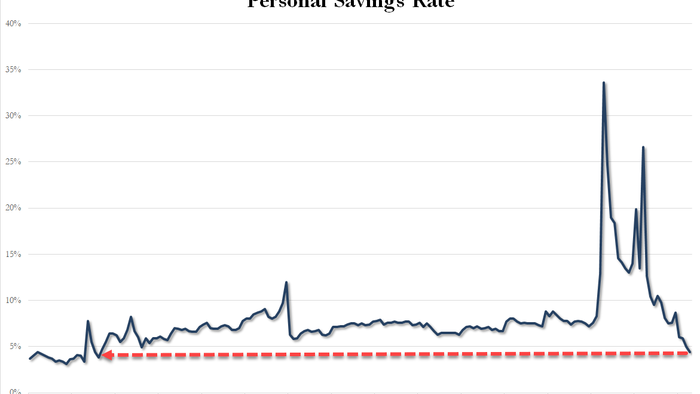 ...spending soared (nominally) and incomes only grew modestly sending the savings rate to just 4.4%... the lowest since Sept 2008.

Surprise: personal savings rate crashes from 5.0% to 4.4%, the lowest since the month Lehman filed for bankruptcy.

The US consumer is dunzo 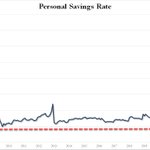 Jeffrey Epstein’s tremendous wealth and power allowed him to continuously prey on young women for decades – even while serving a 13-month stint in a Florida jail for pedophilia.

According to multiple accounts, Epstein had a network of girls recruiting other victims for his sexual appetite, all under the direction of his long-time ‘Madam’ and partner in crime, Ghislaine Maxwell – who remains uncharged and has denied any wrongdoing.

According to a new report by the New York Times, dozens of Epstein victims would have been spared from sexual abuse if the FBI and NYPD had listened to accuser Maria Farmer, who told them of Epstein’s behavior some twenty-four years ago.

Farmer, an artist, says Epstein lured her into his world with promises to pay for her painting career – only to be ‘violently groped’ by Epstein and Maxwell, according to her account. She recalls entering Epstein’s orbit at the age of 25, where she says aspiring Victoria’s Secret models would come through for ‘auditions’ for the lingerie company.

According to Farmer, Maxwell would announce upon leaving the house “I’ve got to go get girls for Jeffrey.”

Ms. Maxwell would refer to the girls she was looking for as “nubiles,” Ms. Farmer said. “They had a driver, and he would be driving along, and Ghislaine would say, ‘Get that girl,’” she said. “And they’d stop, and she’d run out and get the girl and talk to her.” –New York Times

And when former President Bill Clinton was coming over, Epstein’s house “bustled in anticipation” of the visit – though Farmer says she never actually saw him there. Her mother, Janice Swain, claims she met Donald one day in Mr. Epstein’s office, to which Epstein reportedly told Trump “she’s not for you.”

Maria’s sister Annie, meanwhile, “had been subjected to a troubling topless massage at Mr. Epstein’s ranch in New Mexico,” after Maria introduced Annie to Epstein.

when she woke up in the house one morning, she recalled him coming into the room, saying he wanted to cuddle, and getting into bed next to her.

Ms. Farmer also recalled Ms. Maxwell repeatedly asking whether she wanted a massage. Eventually relenting, Ms. Farmer followed directions by taking off her clothes and bra and getting under a sheet on a massage table. Ms. Maxwell performed the massage, at one point having Ms. Farmer lie on her back as Ms. Maxwell pulled down the sheet to massage her chest.

“I don’t think there was any reason for her to be touching me that way,” Ms. Farmer said. –New York Times

Maria, meanwhile, also had a disturbing experience with Epstein and Maxwell.

One night, she recalled getting an unusual request: Mr. Epstein needed his feet massaged.

The foot massage was brief and awkward, Ms. Farmer recalled, as Mr. Epstein groaned with what seemed like exaggerated pleasure, followed by a yelp of pain. Then he invited her to sit on the bed, where he was watching a PBS program about math.

Ms. Maxwell joined them on the bed, Ms. Farmer said, and the night took a sudden turn: Both Mr. Epstein and Ms. Maxwell began groping Ms. Farmer over her clothes, rubbing her body, commenting on her features, and twisting her nipples to the point of bruising. She said they did so in unison, mirroring each other’s movements. Fearing that she was about to be raped, Ms. Farmer eventually fled the room and barricaded herself in another part of the house.

She soon discovered that three nude photographs she had kept in a storage box were missing. The photos were of Annie and a third Farmer sister, who was 12, modeling for Maria’s figurative paintings.

When Maria says she contacted the New York Police Department and the FBI about the parade of young women being offered up to the millionaire pedophile, her reports went nowhere.

Officers at the New York Police Department precinct took a report on the purported threat and on the art theft allegation, a copy of which was obtained by The New York Times. But they referred her to other agencies, including the F.B.I., concerning the assault allegation because Ohio was outside their jurisdiction, Ms. Farmer said.

Ms. Farmer said she called the F.B.I. and spoke for about half an hour with the agent who answered the phone. The agent did not say what would happen with her report, she said. She asked if she should phone other law enforcement officials in individual states, like Ohio and New Mexico, and was told that was “up to you,” she said. She recalled contacting at least one other jurisdiction — she did not remember which — and making no progress.

Maria Farmer’s account is corroborated by art collector Stuart Pivar, who says he recalled running into Farmer at a flea market at the time – and says she mentioned having “serious concerns about Mr. Epstein that she said she had reported to law enforcement.”

Others ignored her as well

Farmer said she also raised her concerns about Mr. Epstein with leaders in the art community, including Ms. Guggenheim, the dean at the art school who had first put her in touch with Mr. Epstein. But she said Ms. Guggenheim did not seem to take the issue seriously. Ms. Guggenheim said in an interview that the details she was aware of at the time did not rise to a level that would require intervention.

The two Farmer sisters made another run at telling their story in 2003 to Vicky Ward, a reporter for Vanity Fair, which had commissioned an article about Mr. Epstein’s complicated finances that would also mention his proclivity for young girls. The article was published with no mention of the Farmers, and they felt they were left badly exposed.

After the Farmer sisters told Vanity Fair their story, they claim to have received angry phone calls – including one from Maxwell in which they were warned,”Better be careful and watch your back,” adding ” ‘I know you go to the West Side Highway all the time. While you’re out there, just be really careful because there are a lot of ways to die there.’”

Epstein continued to prey on young women for nine years before anyone began investigating his proclivities. After his 2008 stint in jail under a ‘sweetheart’ deal which allowed him to leave the jail and essentially roam free under loose guidelines his lawyers were able to secure. And after his second entanglement with the law – this time an arrest for sex trafficking underage girls, Epstein was found dead in his jail cell pending trial – which was ruled a suicide.