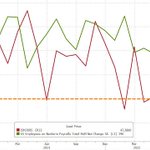 Just wait to see what demand does with oil below $100

US Services Surveys Signal "Bout Of Stagflation" Ahead, Employment Contracts Most Since COVID Collapse https://www.zerohedge.com/personal-finance/us-services-surveys-signal-bout-stagflation-ahead-employment-contracts-most-covid

EU: How To Stop Mass-Migration From Africa? Bring Everyone To Europe!

Authored by Judith Bergman via The Gatestone Institute,

“Migration is a priority for all of us here” said EU Commissioner for Migration, Home Affairs and Citizenship, Dimitris Avramopoulos, at the recent Fifth Euro-African Ministerial Conference on Migration and Development in Marrakesh at the beginning of May. The conference is a part of the Euro-African Ministerial Dialogue on Migration and Development (also known as the Rabat Process[1]).

The Euro-African Ministerial Dialogue on Migration and Development was founded in 2006 to contain migration from Africa into Europe, specifically, at the time, the increase of migrants crossing the Strait of Gibraltar from Morocco into Spain and from there into the rest of Europe.

Dimitris Avramopoulos (center), the EU Commissioner for Migration, Home Affairs and Citizenship, at the Fifth Euro-African Ministerial Conference on Migration and Development in Marrakesh on May 2, 2018. (Image source: EU)

“offer a … response to the fundamental issue of controlling migratory flows … the management of migration between Africa and Europe must be carried out within the context of a partnership to combat poverty and promote sustainable development and co-development”.

In other words, Europe would fund development and anti-poverty measures in Africa, so that Africans would stop looking for a better future in Europe. Almost 60 European and African countries, as well as the European Commission (EC) and the Commission of the Economic Community of West African States (ECOWAS) are involved in the Rabat Process.

The founding document from 2006 also mentioned, as a brief addendum:

“…this partnership will also address the migratory phenomenon from all points of view deemed relevant by the partner countries, such as making better use of the potential of legal migration and its beneficial effects on the development of countries of origin and host countries”.

It did not take long for the brief addendum on legal migration to take center stage. The Second Euro-African Ministerial Conference on Migration and Development in Paris (2008) decided that “organised labour migration … represents a source of cultural and social enrichment through the human and economic exchanges it generates” and that dialogue should be centered around the following priorities: Organizing legal migration, fighting against illegal migration and focusing on the synergies between migration and development.

“Legal migration…makes it possible for labour markets to work better in destination countries and contributes, through both remittances and the acquisition of professional skills by migrants, to the development of countries of origin. In addition, it can serve as an important deterrent to irregular migration… It is therefore advisable to promote legal migration…according to the needs and capacities of each national economy, without prejudice to other forms of legal migration, including family reunification, while respecting national competences”.

At the Third Euro-African Ministerial Conference on Migration and Development in Dakar (2011), legal migration was described as representing

At the fourth Euro-African Ministerial Conference on Migration and Development in Rome in 2014, a fourth “pillar” was added, “promoting international protection”.

At the Fifth and most recent Euro-African Ministerial Conference on Migration and Development, the participants went even further. They declared:

“… the Rabat Process partners recognise the need to encourage and to strengthen the pathways to regular migration… and to promote the mobility of certain categories of travellers (in particular, businessmen and businesswomen, young professionals or researchers) between European and North, West and Central African countries”.

They also decided to “Promote regular migration and mobility, especially of young people and women, between Europe and North, West and Central Africa, and within these regions… Encourage the establishment of exchange networks between vocational training institutes and employment agencies in Europe and Africa, in order to draw full benefit from the skills of young migrants… “.

There are now five priorities of the Rabat Process which are, in the words of EU Commissioner Dimitris Avramopoulos,

“Address the root causes of irregular migration, better organization of the legal channels of migration and mobility, giving protection to those who need it, fight in a more effective way against the networks of traffickers… improvement of… cooperation in the field of the repatriation of illegal immigrants“.

While the focus on illegal migration remains, the original goal of stopping African citizens from migrating into Europe appears to have been lost entirely.

Instead, the declaration pronounces African legal migration to be a positive thing, even stressing as beneficial the idea of migration of certain groups, such as researchers and business people.

No one seems to ask how draining Africa of skilled labor, such as businessmen and researchers, is going to help the continent develop and thus stem the trend of migration?

Hungary appears to be the only European country to discover the discrepancy between the original intent of the Rabat Process and the positive view of legal migration from Africa that it advocates today. As a result, Hungary refused to sign the declaration of the Fifth Euro-African Ministerial Conference on Migration and Development. “The statement adopted in Marrakech within the framework of the Rabat Process could lead to a fresh wave of migration, and for this reason Hungary did not join the political declaration”, Minister of Foreign Affairs and Trade Péter Szijjártó said on Hungarian television. “The declaration adopted at the meeting [says] that migration is a positive process that must be encouraged, and accordingly new migration channels must be opened and migrants cannot be differentiated based on their legal status”, he continued.

“According to the statement, which Hungary was alone in refusing to support, the countries of Europe are supporting the position of the African countries. And this is totally at odds with the Rabat Process that began ten years ago, the original goal of which was precisely to use European funding to realize development projects in Africa in the interests of reducing emigration.

“Based on the mandate that the Hungarian Government has received from the electorate, it is its explicit duty to put forward its anti-immigration standpoint at every opportunity”.

The Hungarian government appears to be the only government that considers whether the citizens it was elected to serve would support the declaration. Other European governments appear to think that asking their electorates what they think about African migration into Europe is irrelevant. Indeed, the Rabat Process, including the latest conference in Marrakesh, has gone largely unreported in the European press and is not the subject of debate, because most Europeans will have never heard of it.

In the meantime, Europeans may have noticed that whatever their politicians were telling them about stemming African migration to the continent, migration has only grown. According to the World Migration Report 2018 — published by the International Organization for Migration (IOM):

The growing migration of Africans, however, is not limited to the north of Africa. According to a February 2018 Pew Research Center analysis:

“International migration from countries in sub-Saharan Africa has grown dramatically over the past decade, including to Europe and the United States. Indeed, most years since 2010 have witnessed a rising inflow of sub-Saharan asylum applicants in Europe… In the case of Europe, the population of sub-Saharan migrants has been boosted by the influx of nearly 1 million asylum applicants (970,000) between 2010 and 2017, according to a Pew Research Center analysis of data from Eurostat, Europe’s statistical agency. Sub-Saharan Africans also moved to European Union countries, Norway and Switzerland as international students and resettled refugees, through family reunification and by other means”.

According to EU Commissioner for Migration, Home Affairs and Citizenship Dimitris Avramopoulos, the recent Euro-African conference was “Excellent… [and] Committed to strengthen our cooperation to address root causes, reduce irregular migration and enhance protection and legal channels. Europe and Africa need each other more than ever”. They have already tried to do that for 12 years. It is unlikely to lead to anything but more migration.

Then again, Avramopoulos does not consider his job to stop migration. “We cannot and will never be able to stop migration”, he wrote in late 2017. “At the end of the day, we all need to be ready to accept migration, mobility and diversity as the new norm and tailor our policies accordingly”.

EU: How To Stop Mass-Migration From Africa? Bring Everyone To Europe!