From a Hollywood Industry veteran.

1) We are made in God's image & have within us a microcosm the same forces, aspects of our nascent Unity. When we balance the aspects of God within us by daily prayer & meditation.

I don’t think I’ve seen a photo come out of this destruction that more perfectly encapsulates the fight right now. https://twitter.com/comradedoyie/status/1276936306506051584

#DigIt! US Space Force Must Trip The Light Fantastic - https://www.coreysdigs.com/u-s/us-space-force-must-trip-the-light-fantastic/ via @CoreysDigs

Michigan man, 18, is charged with assault for attack on white Macy's employee after cops say there is NO evidence the store manager used the n-word and beating was 'unprovoked' 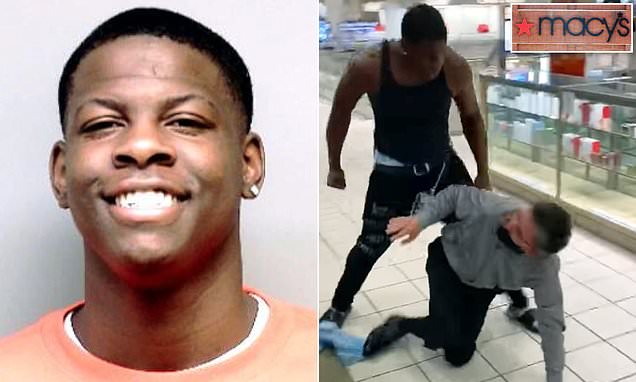 Man, 18, is charged with assault for attack on white Macy's employee

Damire Palmer, 18, is being charged with felony assault after he was identified as the black man pummeling a white Macy's employee in a viral video fi...

The Rockefellers were just getting started with their eugenics plan back in the early 1900s, and by the time the 1960s rolled around, they were full steam ahead with their population control agenda – including the development of anti-fertility vaccines for both men and women.

• In
1968 the Rockefeller Foundation stated that the oral pill and IUD will turn out
to be impracticable on a mass scale. They set out to fix that.

• In their 1986 annual report they admit funding
research into the use of fertility-reducing compounds in relation to food for
“widespread use.”

• By 1988 they were funding the first phase of anti-fertility vaccines for women.

• In 1991 a “Task Force on Vaccines for Fertility Regulation” was created with the Rockefeller Foundation, WHO, World Bank and UN Population Fund. Mind you, this is 20 years after sterilization laws were repealed.

In a brilliant report by journalist Jurriaan Maessen, he compiled and connected critical data pertaining to the Rockefeller’s anti-fertility plans. Some of the source links were removed, so I have reviewed all of the content, traced the annual reports, uploaded them, and linked them accordingly below – in addition to adding some other findings. I highly recommend reviewing the full, extensive report. Below are some key highlights.

In a 1968 Report by the Rockefeller Foundation on ‘Problems of Population,’ it definitively states:

Experience of the past few years indicates that the oral pill and the IUD, while far superior in many respects to contraceptive methods available previously, have serious drawbacks that limit their effectiveness. We are faced with the danger that within a few years these two ‘modern’ methods, for which such high hopes have been held, will in fact turn out to be impracticable on a mass scale. It is clear that major improvements in contraceptive methodology are required.

The male pill is being very little investigated; several types of drugs are known to diminish male fertility, but those that have been tested have serious problems of toxicity. Very little work is in progress on immunological methods, such as vaccines, to reduce fertility, and much more research is required if a solution is to be found here.

The foundation will endeavor to assist in filling this important gap in several ways:

1) “Seeking out or encouraging the development of, and providing partial support to, a few centres of excellence in universities and research institutions in the United States and abroad in which the methods and points of view of molecular biology are teamed with the more traditional approaches of histology, embryology, and endocrinology in research pertinent to development of fertility control methods;”

2) “Supporting research of individual investigators, oriented toward development of contraceptive methods or of basic information on human reproduction relevant to such developments;”

3) “Encouraging, by making research funds available, as well as by other means, established and beginning investigators to turn their attention to aspects of research in reproductive biology that have implications for human fertility and its control;”

In the Rockefeller Foundation’s 1988 annual report they state that their “population division” was making progress:

India’s National Institute of Immunology (in New Delhi) successfully completed in 1988 the first phase of trials with three versions of an anti-fertility vaccine for women. Sponsored by the government of India and supported by the Foundation…” The National Institute of Health (NIH) published the abstract on ‘Anti-fertility Vaccines’ in 1989. “Vaccines are under development for the control of fertility in males and females.

In 1991, the WHO “Task Force on Vaccines for Fertility Regulation,” consisting of the World Health Organization, World Bank and UN Population Fund, reported:

Basic and clinical research on the development of birth control vaccines directed against the gametes or the preimplantation embryo. These studies have involved the use of advanced procedures in peptide chemistry, hybridoma technology and molecular genetics as well as the evaluation of a number of novel approaches in general vaccinology. As a result of this international, collaborative effort, a prototype anti-HCG vaccine is now undergoing clinical testing, raising the prospect that a totally new family planning method may be available before the end of the current decade.

The Biotechnology and Development Monitor reported:

The Task Force acts as a global coordinating body for anti-fertility vaccine R&D in the various working groups and supports research on different approaches, such as anti-sperm and anti-ovum vaccines and vaccines designed to neutralize the biological functions of hCG. The Task Force has succeeded in developing a prototype of an anti-hCG-vaccine.

Their “strategy” states: “Some prototype vaccines have undergone or are currently undergoing clinical trials in several countries. The entirely new immunological approach is based on the idea that a long-term contraceptive method, intended for use in family planning programmes in countries with low levels of medical care, should require little motivation of the user, should be cheap, and should be simple to apply by the provider. The approach is an integral part of the strategy of demographic control…”

Under the report’s section
titled ‘Actors Involved,’ it goes on
to list the governments of Sweden, United Kingdom, Norway, Denmark, Germany and
Canada, as well as the UNFPA and the World Bank. It also includes The
Population Council of the United States being funded by the Rockefeller
Foundation, the National Institutes of Health, USAID, the National Institute of
Immunology in India which is also funded by the Rockefeller Foundation and the
Canadian International Development Research Centre, the US Contraceptive
Development Program, and the US Center for Population Research at the National
Institute of Child Health and Development.

In addition to the funders
and supporters of this Task Force, they had setup clinical research and
clinical trials with anti-fertility vaccines based at universities in Kenya,
Germany, and France.

In the 1986 Rockefeller Foundation annual report, the organization admits funding research into the use of fertility-reducing compounds in relation to food for “widespread use”:

Male contraceptive studies are focused on gossypol, a natural substance extracted from the cotton plant, and identified by Chinese researchers as having an anti-fertility effect on men. Before widespread use can be recommended, further investigation is needed to see if lowering the dosage can eliminate undesirable side-effects without reducing its effectiveness as a contraceptive. The Foundation supported research on gossypol’s safety, reversibility and efficacy in seven different 1986 grants.

In the RF’s 1988 annual report, gossypol as a contraceptive was also elaborated upon (page 22):

Gossypol, a natural substance found in the cotton plant, continues to show promise as an oral contraceptive for men. Because it suppresses sperm production without affecting sex hormone levels, it is unique among the experimental approaches to fertility control in men. Foundation-funded scientists worldwide have assembled an array of information about how gossypol works, and studies continue on a wide variety of its clinical applications. Dose reduction is being investigated to reduce health risks associated with the use of gossypol.

Though they allege that the development of gossypol as an anti-fertility compound was halted in the 1990s, the cottonseed containing the substance was selected for mass distribution in early 2000s, under the guise of claiming that cottonseed could help defeat hunger and poverty. Genetic engineering ensued to allegedly reduce gossypol in cottonseed. But did they? Based on research, and given the current infertility rate in women and significantly reduced sperm rate in men, it wouldn’t seem to be the case.

NOTE:
The Rockefeller Foundation, World Health Organization, the World Bank, GAVI, Bill & Melinda Gates Foundation, Clinton Foundation, USAID, Planned Parenthood, Eugenicists, big pharma, countless NGOs and foundations, multiple scientific research laboratories, big pharma, “philanthropists,” governments, Ivy league colleges and universities, and numerous individuals who have been in leadership at these organizations, creating off-shoots and additional NGOs, consist of people who do not have your best interest at heart, lie and deceive, deny and manipulate, and have brought endless levels of illness and infertility to countries across the world. If you cannot see this, you have lost your way. There are no “safety measures” or “follow-ups” in the research they do, for they do not care of the side effects and detriment it may cause, because it only aligns to further their goal. Just as the judge who presided over the most recent lawsuit against Monsanto stated, this is the case with many in positions of power:

Monsanto does not particularly care whether its product is in fact giving people cancer, focusing instead on manipulating public opinion and undermining anyone who raises genuine and legitimate concerns.

Coming Up Next: Part 3 of 6 – DNA Collection and Biotechnology Companies

By James Fitzgerald I have to admit that my skin color has been a problem for me throughout my life:...
liberty aggregatorJuly 11, 2020 at 6:00 am.
Corey's Digs

We had a lot of discussions on important topics this week, from a Covid cure to attorneys fighting for our...
liberty aggregatorJuly 10, 2020 at 6:02 am.
Corey's Digs

First, they wanted everyone masked and stocked up on hand sanitizer, then came the toilet paper mania, and in short...
liberty aggregatorJuly 8, 2020 at 5:00 am.
Corey's Digs

Let’s Get Real Before Real Gets Us

The number one question in the U.S. right now is who is going to stop all this lawlessness from coast...
liberty aggregatorJune 30, 2020 at 4:00 pm.
Corey's Digs

Dig It! #52: Tribute to Patriots on Dig It 1-Year Anniversary!

US Space Force Must Trip The Light Fantastic

By James Fitzgerald Social and political affairs on Earth may currently be heated and divisive, but spare a thought for...
liberty aggregatorJune 26, 2020 at 5:00 am.
Corey's Digs

IMPORTANT PODCAST! We cover Corey's new visual report on Historical Hypocrisy & Psychological Warfare, some of the tactics being used,...
liberty aggregatorJune 19, 2020 at 6:02 am.
Corey's Digs

This is an important pictorial book illustrating the psychological warfare taking place across America, with the same playbook being implemented...
liberty aggregatorJune 18, 2020 at 7:42 pm.
Corey's Digs

Defy Their Wrath and Walk The Path