Per this "study" from EveryTown, 76% of the social "cost" of gun violence is basically "pain and suffering", and old ambulance chaser meme.

This appears to be a rework of the same rubbish published by Giffords, which started life staffed by SF lawyers. 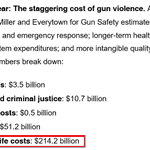 An interesting analysis of hard numbers and how time+method is the source of the confusion.

If one kid died last year from eating Tide Pods, and two died this year, then you can say there was a 100% increase in the child Tide Pod death rate. But your summary would be completely misleading.

Herein we will do an academic deconstruction of a similar propaganda move by Michael Bloomberg’s favorite charity, Everytown for Gun Safety.

Statistics don’t lie but statisticians do

The core claim made by Everytown, as shown in the social media image they created, is that kids – people age 14 and under – were the fastest-growing firearm suicide rate age group.

The two agitprop con jobs at play here involve who is being studied and when. Let’s start with “who.”

In the book Guns and Control by Gun Facts project founder Guy Smith, we see that in the sundry age groups, nearly no youngsters commit suicide, regardless of the means. And firearm suicides are a subset of that.

For the most recent year that the Centers for Disease Control report via their WONDER database, a total of 443 kids (age 14 or less) committed suicide. That number is likely overstated because some murders are made to look like suicides, but we’ll have to take the number as our baseline.


These are suicides by any means – slitting wrists, drowning, jumping off Lover’s Leap, ingesting poison (including Tide Pods), suffocation and, yes, guns. Given that in the year under review there were 59,955,368 kids in America, this means there was a suicide rate of 0.7 per 100,000 population.

Of the 443 youth suicides in 2016, 160 were committed with guns (and again, some murders are ascribed to suicide). With a number like 160, it doesn’t take much of a numeric increase to make the rate appear to be escalating out of control.

Below is the chart showing suicides by the top three means for kids. 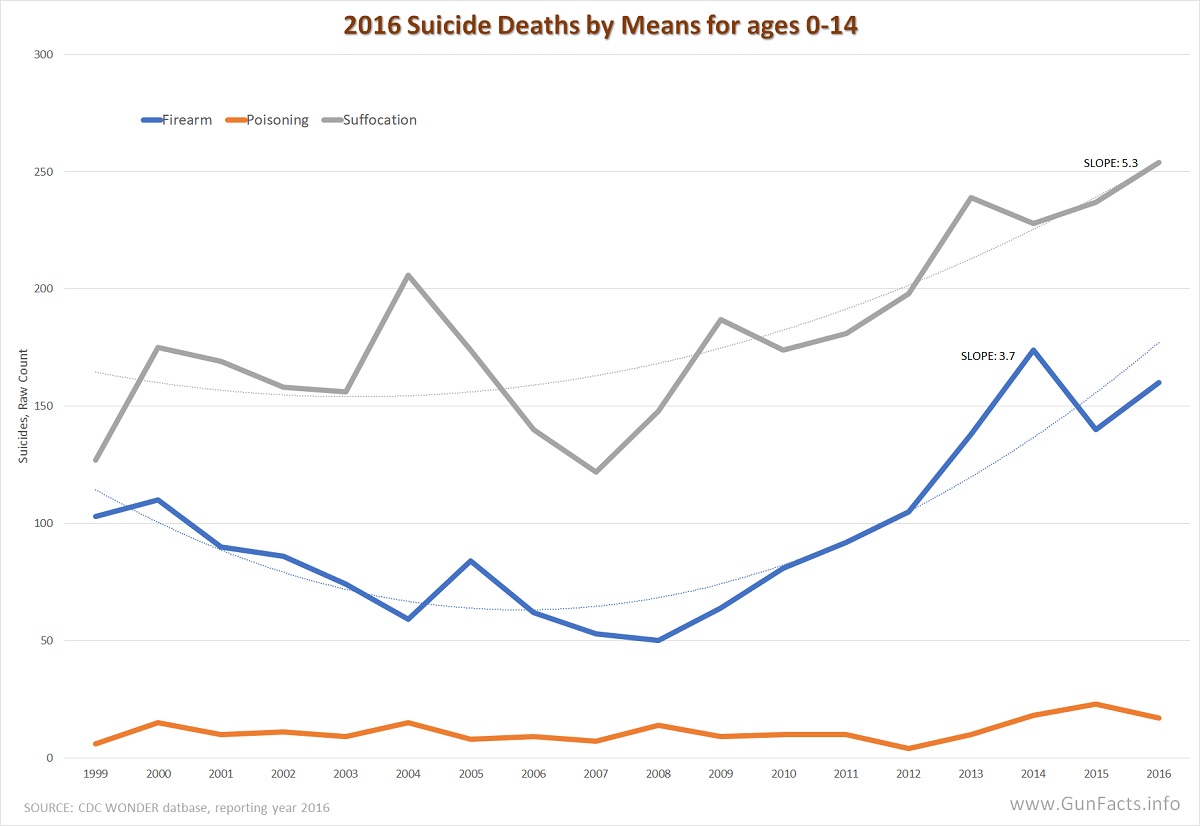 In this chart we see two obvious things, and one that is not obvious unless you are a crafty political operative working for Everytown.

First, we see that before the Great Recession, firearm suicides were falling, and suffocation suicides were steady. Once the great recession started, all modes of suicides started going up. In other words, a general social phenomenon was causing kids (and adults for that matter) to check out. But because kids had very low suicide rates to begin with, their climb was a bit vivid as a percentage rise.

Those are the obvious observations. Now for the less notable one.

In the Everytown poster, they started their analysis in 2009, the year after the Great Recession began. Note that 2008, the year before, was the all-time low point for firearm suicides. Using our longer 1999–2016 range (Everytown used a different CDC database which added two years), youth suicides rose 82%, suffocation suicides 100% and firearm suicides 55%. All the other modes of suicide were infrequent enough to be statistically unstable (e.g., less than one per year on average for fire, three for falling, two for drowning).

In order to get their dramatic headline, Everytown had to:

This is not to say that youth suicide isn’t appalling. But an intentional misrepresentation of the long-term statistics in order to generate undue fear is monstrous. And it was a grand waste of Michael Bloomberg’s money.