“These new emails show WHO and Fauci’s NIH special accommodations to Chinese communist efforts to control information about COVID-19.” 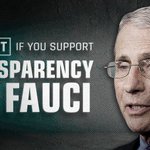 Judicial Watch announced that it obtained 280 pages of documents from the HHS revealing that from 2014 to 2019, $826,277 was given to the Wuhan Institute of Virology for bat coronavirus research by the NIAID, which is headed by Dr. Fauci. READ: (Washington, DC) Judicial Watch today announced that it obtained 280 pages of documents from the Department of Health and Human Services revealing tha...

Months after the Biden administration canceled a program that deported illegal immigrants convicted of sex crimes, the Border Patrol reports a stunning 3,166% increase in sex offenders crossing into the U.S. illegally via Mexico. READ: Months after the Biden administration canceled a program that deported illegal immigrants convicted of sex crimes, the Border Patrol reports a stunnin...

[The] Facebook Oversight Board decision upholding President Trump’s Facebook ban undermines the First Amendment and free speech. The brazen deplatforming of President Trump is already chilling the speech of other Facebook users and Internet users generally, who fairly worry about Facebook and Big Tech censoring and deplatforming them.

It is notable that Facebook refused to disclose to its designated Oversight Board whether the Trump ban resulted from collusion with other government officials and politicians. Indeed, Judicial Watch recently uncovered that state government officials in California and Iowa successfully pressured Facebook, Youtube/Google, and Twitter to censor election social media posts by Judicial Watch and other citizens. (I have been locked out of Twitter for four months over a tweet previously found not to be in violation of Twitter’s rules.)

Judicial Watch had argued that Facebook’s Oversight Board should have reversed the president’s ban because the ban is an affront to First Amendment protections of free speech, peaceable assembly, and the right to petition the government. There is no credible evidence that President Trump either morally or legally incited violence. He was resoundingly acquitted by the United States Senate after the impeachment “prosecutors” failed to produce credible evidence he incited violence. For Facebook and its Oversight Board to suggest President Trump incited violence and that complaints about the administration of an election could incite violence is a political position aligned with the Left and political opponents of President Trump and his supporters.