This comes after a letter from @Lancegooden. Congressman Gooden said he had strong reason to believe that China was funding these groups to help Joe Biden win. 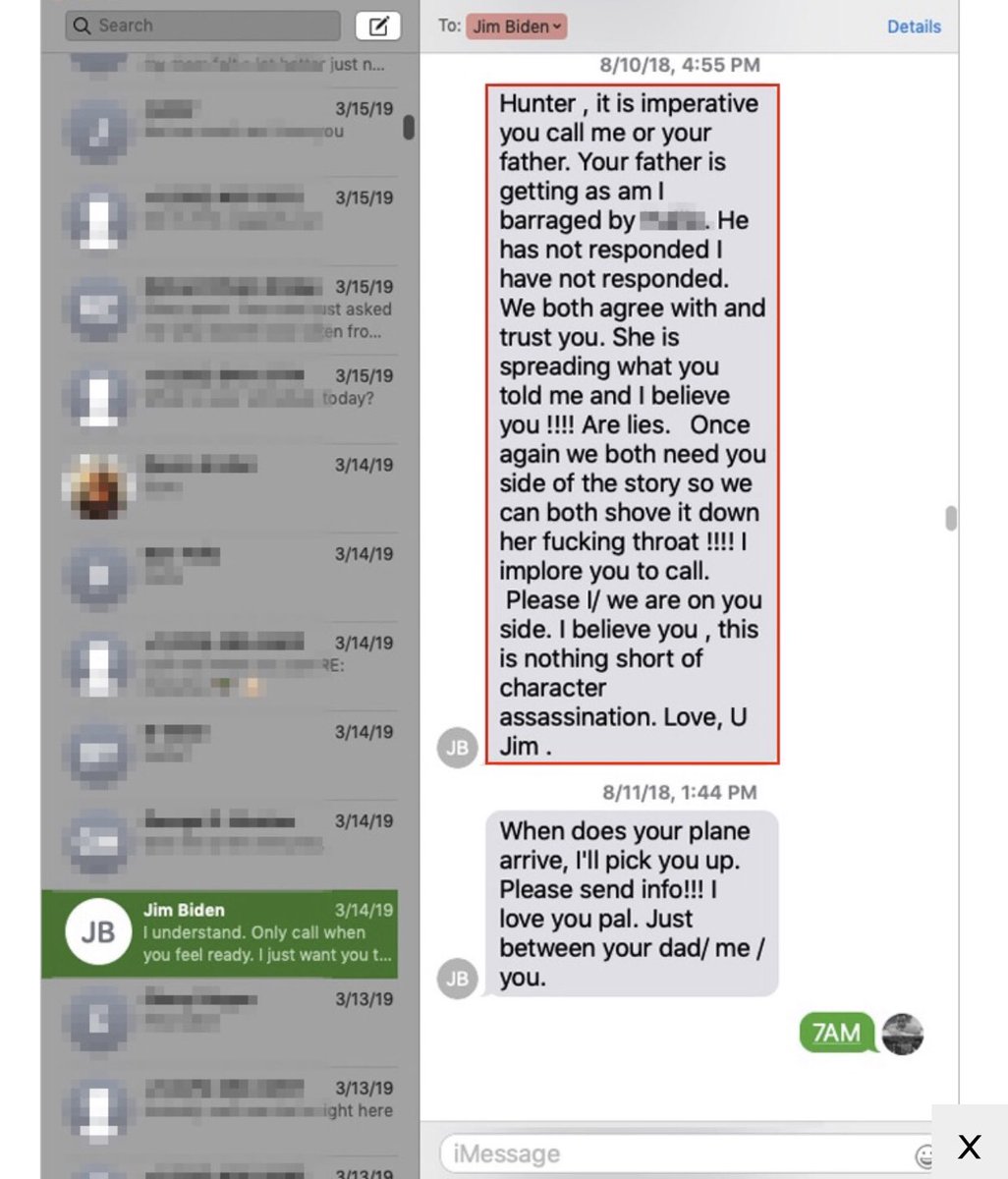 A mother accusing Hunter Biden of inappropriate contact with her child told Joe Biden she would call the police if Hunter came near the minor again.

Joe and his brother, Jim, wanted to silence her.

“A Pennsylvania Appeals Court turns down the Trump Administrations request for Poll Watchers to monitor satellite election offices.” @OANN How terrible is this? We are just seeking a fair vote count. This can only lead to very bad things. Bad intentions much??? Disgraceful!!!

I'm working on several things right now. Multitasking, to try to get 3 key articles out this week. Something tells me we are in for another week of bombshells as well. Focus, focus, focus. After we win this election, I think we should all take a 1-week vacation. 😜 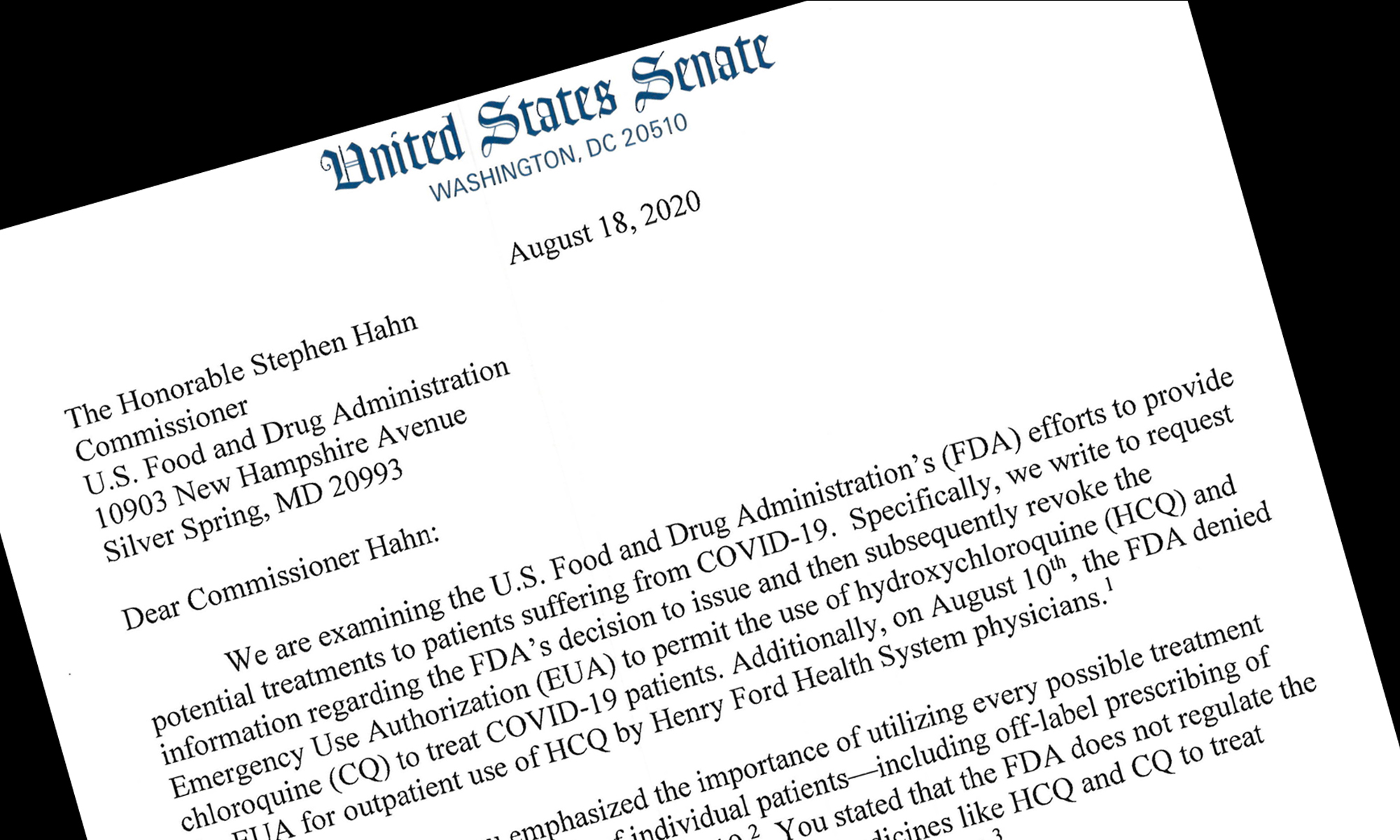 On August 18, 2020, Senator Ron Johnson (R-Wis.), Sen. Ted Cruz (R-Texas), and Sen. Mike Lee (R-Utah) submitted a letter to the U.S. Food and Drug Administration (FDA) Commissioner Stephen Hahn, demanding information regarding their actions taken on the use of hydroxychloroquine for COVID-19. “Physicians are concerned that the FDA’s actions regarding hydroxychloroquine (HCQ) may be directly costing lives by limiting outpatient access to this potentially beneficial treatment,” the letter stated.

The senators wrote that the FDA’s actions on HCQ have “led to misinformation and confusion across the country. Some states have restricted the ability of physicians to write and pharmacies to fill HCQ and CQ prescriptions.” The senators are correct in that the FDA has done a fine job of creating confusion, as Corey’s Digs has been documenting their actions on HCQ since the beginning of this “pandemic.” This also comes on the heels of the historical 24-hour censoring takedown of America’s Frontline Doctors, who have been fighting to get critical information out on the benefits of HCQ.

The senators point out that “the licensed
physicians we have heard from… have pointed to the low mortality rates in other
countries—like India, Turkey, South Korea, and Morocco—that are using HCQ
widely on outpatient COVID-19 populations before the disease progresses to more
lethal stages of the virus that require hospitalization.”

They have given the
FDA a deadline of 5:00 p.m. on August 25, 2020 to submit information on the
following requests:

The answers to these requests can already be found in Corey’s Digs reports on COVID-19. The fact of the matter is that they do not have any studies to prove that HCQ has no clinical effect or may be harmful to a patient when used in the early stages of onset of symptoms because they only promoted studies on those who were already hospitalized. However, there have been studies to show HCQ does in fact work in early stages. In addition to this, the coronavirus “task force,” the WHO, and all major media outlets persistently reported on studies that were later retracted as bogus studies. Furthermore, the only time Stephen Hahn spoke out about doctors being able to prescribe HCQ, after May 29, was in a very short statement he made on NBC’s “Today” show on July 30, which could be equated to a “false/positive” statement at best. At no point has the FDA clarified this correctly on their website, twitter feed, to the CDC, in documents to medical boards, or by getting the information out on multiple news stations. Nor has the FDA requested that twitter remove their malicious “live news on coronavirus” alerts as though it is new information, when in fact it dates back to June, creating far more confusion.

The very next day, on August 19, Health and Human Services (HHS) announced a “rescission of guidances and other informal issuances concerning premarket review of laboratory developed tests.” Essentially, this removes the FDA from regulating and potentially slowing down lab-developed tests, which some have argued that the FDA does not have this authority to begin with. HHS stated that “the Trump Administration is committed to combating COVID-19, to ensuring that the American people are protected against future pandemics, and to keep duplicative regulations and unnecessary policies from interfering in these efforts.” Whereas this is specific to tests, it is indicative of the FDA losing ground on several fronts.

On August 21, the Texas Medical Board issued a press release on their ongoing COVID-19 response. In it, they addressed misinformation regarding the Board’s previous statement on COVID-19 treatments.

“The
Texas Medical Board has never prohibited the use of hydroxychloroquine alone,
or in conjunction with other drugs, for the treatment of COVID-19. In fact, the
TMB does not prohibit any drug or treatment. The off-label use of
hydroxychloroquine as an alternative therapy for COVID-19 patients is
completely permissible. As is the case with any alternative therapy, physicians
must ensure they comply with Board Rule 200 which requires physicians to
provide full disclosure of treatment options, side effects, and obtain informed
consent. Licensees should not fear disciplinary action from the TMB simply for
expressing their support of specific COVID-19 treatments like
hydroxychloroquine. What providers should keep in mind is because there is no definitive
cure, claims of a cure may constitute false, misleading or deceptive advertising,
which is prohibited by law and may prompt an inquiry from the TMB.”

On
August 22, four days after the senators submitted this request to the FDA,
President Trump tweeted that “the deep state, or whoever, over at the FDA is making
it very difficult for drug companies to get people in order to test the
vaccines and therapeutics. Obviously, they are hoping to delay the answer until
after November 3rd. Must focus on speed, and saving lives!” He made
it a point to tag FDA Commissioner Stephen Hahn in this tweet.

While all of this was taking place over the past week, reports emerged that the FDA is putting a hold on convalescent plasma to treat COVID-19 after NIAID Director Dr. Anthony Fauci and two other federal health officials argued that there is not enough data to show that it is working. On Sunday afternoon, President Trump, HHS Secretary Alex Azar, and FDA Commissioner Stephen Hahn announced in a press conference that the FDA is issuing an emergency use authorization (EUA) for blood plasma as a coronavirus treatment, stating that scientists have concluded that it is safe, and there has been a 35% increase in survival of COVID-19 patients, which they deem to be very successful. They will continue to gather data moving forward, as they do with all EUA’s.

Corey’s Digs will update this developing story on HCQ when new information is released.

The post FDA in Hot Seat by Senators’ Demands on HCQ and HHS Pulling Rank on Tests appeared first on coreysdigs.com.

Down The Tube: Take A Stand With Fallen Patriot Accounts