“What is the use of having sentencing guidelines if judges don’t follow them?”

This is a common refrain from people of a “law and order” mindset, which included most of America in the early 1990s after the country endured a multi-decade, stratospheric climb in violent crime.

To summarize this and related positions, the public believed that “locking up violent predators for extended periods works.” A recent report sheds a little more light on the subject and may well certify the notion.

Starting in 1992, just before violent crime peaked in America, states and the Federal government all jumped on the “get tough on crime” legislative spree. Overall, this suppressed violent crime. But violence started creeping up around 2015, which got many people wondering why – given that all the “get tough” laws were still in effect.

Laws are often written with wiggle room. For example, “sentencing guidelines” are just that – guidelines. They are not chiseled in stone down to two decimal places. The same caveat applies to how government agencies interpret rules and set priorities. For example, in the year 2000, 1.3% of suspects that the federal government declined to prosecute for guns crimes were declined because of “alternatives,” such as “pretrial diversion” or “administrative disciplinary options.” In 2016, the rate was over 11%.

A new data survey 1 covered a healthy period of 16 years and studied what has happened at the federal level vis-à-vis gun crime prosecution.

The BIG warning here is that we are exploring the relationship between gun crimes and those that the federal government did or did not take action on. All states have various gun crime laws, and if the sentences are tougher there, often the crimes do not get referred to federal attorneys. However, where the feds have stiffer sentencing guidelines and a suspect is “worth” imprisoning for a long time, their case often does get kicked up a level. Hence, what we cover below is only part of the enchilada.

That being said, in the most recent year there were over 10,000 firearm referrals to federal attorneys and 9,700 of them were for possession by prohibited people. Given that 91% of prohibited persons investigated were prohibited by prior felony convictions, and there being 14,415 firearm homicides that year, it is close to universal that those referred for firearm crimes were felons (keeping in mind the number of unsolved murders will disproportionately fall within the felon class as well).

If a gun crime is not referred to federal attorneys, then it will never earn a federal conviction and sentence. Likewise, if the feds decline to take a case, federal penalties will not apply. 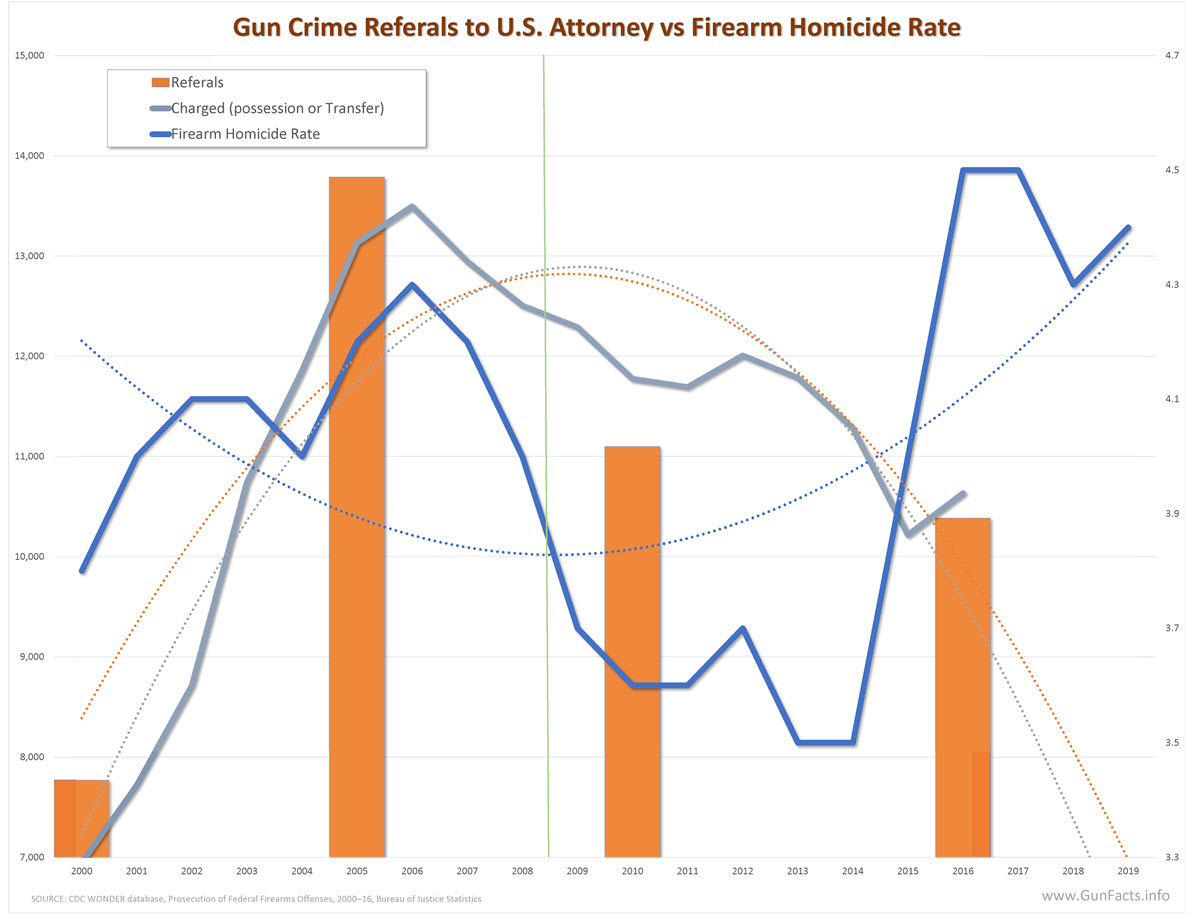 In the study period, referrals of gun crimes went up and then back down, which helps in visualizing possible cause-and-effect relationships in both directions.

This slightly complicated chart shows the relationships between referral rates 2 resulting in charges for gun crimes for which the feds will charge people, and firearm homicide rates.

What we see is that charges filed were rapidly escalating until 2006. They steadily declined from there. The green line separates two 8-year presidential administrations (Bush, Obama).

Offhandedly, and assuming some lead-lag effect, at a certain rate federal prosecutions suppress firearm homicides (to a degree) and when relaxed enough, firearm homicide rates rise. But this has a lot of windage because of the different sentencing guidelines. Most (about 91%) of the federal prosecutions are for possession of a gun by a prohibited person (typically, a felon), and they can get up to 5 years for the crime. However, for repeat offenders charged under the Armed Career Criminal Act, the average sentence is 16 years. As such, for a 16-year study, and given the rise and decline of charges well exceeds 5 years, the cause-and-effect is likely.

The declining rate of referrals to federal attorneys is troubling enough, but even when prosecutors do win a case, judges can skew the long-term outcomes and indirectly affect gun crime rates.

A subset of gun crimes are prosecuted under the federal Armed Career Criminals Act (AACA), which has existed since 1984. Though a subset of all gun crime charges, it is a small subset. At its peak in 2009, ACCA convictions made up only 6% of all referred cases.

Yet, the number of ACCA sentences and the length of those sentences started dropping steeply after 2015, and there was an immediate rise in the firearm homicide rate. Though the cause-and-effect relationship cannot be clearly identified, there is a possible explanation, and it involves the U.S. government declining cases.

There are a number of reasons why a federal attorney would decline a case. But the reasons change with priorities over time and administrations. It is common enough for any president to tell his Department of Justice to change priorities for practical or ideological reasons. What we see around the same time as the [a] drop in people sentenced, [b] drop in the length of the sentencing, and [c] rise in firearm homicides is a rather sudden change in the number of cases declined for believing that an “alternative to Federal prosecution” was appropriate. The study says these “alternatives” include “pretrial diversion” and “administrative disciplinary options,” not prison time.

Allow us to put a ribbon around this. At a specific point in time:

This trend is provocative and worrisome for the future. Since there was previously a high rate of ACCA convictions, the drop will have multi-year echoing effects – firearm homicides will continue to rise until such time as the newly created surplus of armed career criminals is reduced.

You might be wonder, oh ever curious Gun Facts reader, what the ratio of sundry firearm crimes may be. To wrap-up this review, a pair of pies.

Note that overwhelmingly [a] most charges are against people who are not allowed to possess firearms and of those, most are disbarred for having prior criminal activities. Multiplied together, they account for 84% of the people that the federal government used to prosecute.