Discussions with #Taliban and others about #Afghanistan involving @US4AfghanPeace to resume, announces @StateDept. 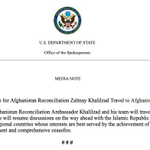 Forget Buffettims, Mungerisms, and so on. The only saying to trade this market is this: "markets stop panicking when policy makers panic" (from Michael Hartnett)

With memories from the recent Chemnitz riots still fresh in German minds, on Sunday hundreds of protesters took to the streets of the eastern German city of Kothen once again, after a 22-year-old man died following a brawl with two Afghan nationals, who were arrested. The man, who was originally reported to have been killed, died after suffering heart failure medics said.

The victim intervened in a dispute over a German woman, which, according to Sachsen Anhalt and witness reports, involved the two suspects and a third Afghan man. Germany’s Bild reported that the argument was about who got the woman pregnant.

“Two Afghans were provisionally detained on suspicion of homicide,” police said on Sunday.

While first accounts said the man was beaten to death after he stepped into the row with another German, local press later reported that the 22-year-old died of a heart failure. The autopsy found the death to be “not in direct relationship” with the injuries suffered and that the man had a pre-existing heart disease, according to the prosecutor’s office.

That did not stop hundreds of protesters from taking to the streets of Kothen, hours after anti-migrant activists in Chemnitz launched a separate call for protests in their city, also in eastern Germany.

Police were deployed to help prevent violent clashes and the city’s mayor had advised residents to stay at home. Two water cannon were also brought in, according to RT.

A local pastor, Martin Olejnicki, said that every effort now had to be made to ease tensions, adding that the church would pray every day “for the victim, his family members and peace in the city”.

“It is always a kind of danger – we just had Chemnitz – and so things could escalate and I believe nobody wants that,” he said. “That’s why we are trying to appease all sides and to talk to people and tell them that it’s not the moment to let things escalate.”

The death comes shortly after the killing in late August of another German man in the city of Chemnitz. He was stabbed and killed by a group of asylum seekers, believed to be from Iraq and Syria, a murder which has galvanized the right-wing in Germany and sent the anti-immigrant AfD party soaring in the polls.

Pro Chemnitz, a group which has organized protests against Germany’s immigration policy in the Chemnitz since the August killing, said that last night’s death was evidence that “Germans are slaughtered everywhere,” asserting that “we must not let this happen again.”

Those opposing Angela Merkel’s open-borders policy have been using the murders as further evidence that crime and insecurity have soared since the chancellor let in millions of asylum seekers three years ago.

Meanwhile, Merkel, whose loose immigration policies were the catalyst for Europe’s refuge backlash, warned that “vigilante justice” would not be tolerated.