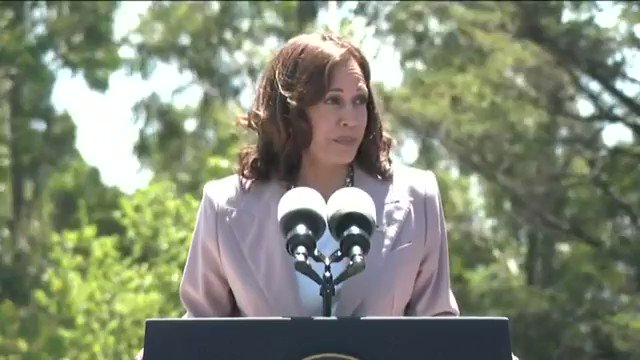 .@VP Harris: "We will make new and used electric vehicles more affordable, so that people can afford a plug-in hybrid or electric car and pay less, or maybe nothing at all when it comes to gas."

Pro-immigration ‘activists’ are about to be livid with rage – probably more so than at any time since Trump cancelled the ‘zero tolerance’ family separation policy last spring – as President Trump has reportedly directed ICE to begin rounding up illegal migrants who have received deportation orders, according to the Washington Post.

The mass roundups are expected to begin with a series of pre-dawn raids on Sunday across some of America’s largest cities. As many as 10 cities, including Houston and Miami, are slate to host ICE agents during the first round of raids. Up to 2,000 families are expected to be targeted in what’s been described as a “family op” (we can already imagine the wording of that AOC tweet).

Acting DHS Secretary Kevin McAleenan has been urging ICE to consider more targeted operations that would seek to detain smaller sums of illegal immigrants, most of whom have already been provided with attorneys.

McAleenan has warned that an indiscriminate operation to arrest migrants in their homes and at work sites not only risks separating children from their parents, but it risks undermining the agency’s case to Congress as it begs for more money to combat the crisis at the border (if the border is where the crisis is, then why isn’t ICE concentrating its assets at the border?)

But moving ahead with the raids is critical for the Trump Administration after the president warned on Monday that the mass roundups would begin ‘next week’.

Next week ICE will begin the process of removing the millions of illegal aliens who have illicitly found their way into the United States. They will be removed as fast as they come in. Mexico, using their strong immigration laws, is doing a very good job of stopping people…….

….long before they get to our Southern Border. Guatemala is getting ready to sign a Safe-Third Agreement. The only ones who won’t do anything are the Democrats in Congress. They must vote to get rid of the loopholes, and fix asylum! If so, Border Crisis will end quickly!

Since WaPo sourced its story mostly to anonymous officials, ICE spokesperson Carol Danko declined to comment on the record, saying only that “as a law enforcement agency, ICE’s mission is to uphold the rule of law; operations targeting violators of immigration laws are not only standard practice, but within the statutory authority prescribed by Congress.”

As it rounds up families, ICE is planning to use hotel rooms and other spaces as ad hoc detention center for families as the roundups begin. Even certain individuals who can’t be immediately deported might find themselves in custody under a policy known as “collateral arrests”, explained in more detail below:

The agency is planning to use hotel rooms as temporary staging areas to detain parents and children until all the members ofi a family are together and ready for deportation. Officials also acknowledge that they might arrest individuals they cannot immediately deport — known as “collateral arrests” – and likely will release those people with ankle monitoring devices. Morgan, deputy ICE director Matt Albence and others are eager to begin the operation despite the risk of a public backlash against an agency after calls to “Abolish ICE” intensified in the wake of the administration’s failed “Zero Tolerance” crackdown last year that separated more than 2,700 children from their parents.

Given that the element of surprise is critical in operations of this scope, ;aw enforcement officials were stunned when President Trump came out and publicly announced his plans. Many now suspect that the operations are intended to serve a duel political purpose that could compromise their efficacy.

“‘Zero Tolerance’ was not telegraphed and didn’t come out very well, so now the idea is to make sure everyone knows what’s coming,” said one senior administration official. “The thinking is ‘Let’s do this a different way, by explaining that these are people with final removal orders who have refused to go.'”

Morgan and others at ICE insist the operation is crucial to uphold the integrity of the U.S. immigration system. There are nearly one million immigrants living in the United States who have been issued deportation orders, they say, and ICE is averaging about 7,000 deportations from the U.S. interior each months.

According to DHS statistics, fewer than two percent of the families who arrived from Central America in 2017 have been deported.

“In February, we sent letters to these individuals telling them they had an order of removal,” Morgan told reporters this week. “We’re at the point right now where we have no other choice but to use our interior enforcement statutory authority to identify where these individuals are and remove them.”

But with the first round opf Democratic primary debates just weeks away, regardless of how successful the operation is, expect these ‘mass roundups’ to generate some more unfavorable comparisons to the Third Reich from the furthest left elements of the Democratic Party.