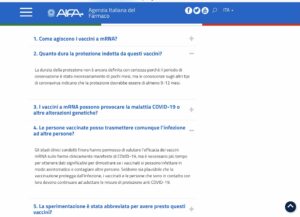 Are in the process of vaccination against the Sars-Cov2. Let us leave to speak of organizational – stop (momentary?) the first vaccine arrived, the Pfizer, great absence of the italo English, Astra Zeneca, and the imminent go-ahead for the Modern – because these topics are covered extensively in the media.

We wonder what will happen when the majority of italians and europeans will be vaccinated. Circulate conflicting positions, on the one hand there are those who argue that “with the administration to at least 70% of the population, there will be a herd effect”, i.e. you will get a protection from the disease even for those who are not vaccinated up to the disappearance of the infection. And those who, instead, says that even after the mass vaccination will not give up precautions (distancing, masks, and the lockdown random) because you do not know the efficacy of new pharmaceutical products.

Not if they know the efficacy is a fact stated, as you can read on the website Aifa. About sera Pfizer and the Modern is “supposed” that the protection period is of 9-12 months, “such as that of vaccines against other coronaviruses”. And, above all, do not know, if the vaccinated person, once encountered the virus, can transmit to others. Click here.

On this last uncertainty, far from being irrelevant, is crucial for the future of the pandemic.

By a year we are living without meet, “sacrificing” schools and universities (of the sacrifices made, this remains the most serious), by ruin of all the activities that are based on conviviality and exchange, and for the fact that it could circulate positive people to the virus without symptoms and that, however, transmit the infection.

Now, if even the vaccinated may transmit the Covid, we find ourselves in a mess of gigantic proportions, comparable only to the discovery of accasare the sick in the RSA raised to the nth power.

Remains, of this, only a hypothesis?

Let’s see what they say the latest studies.

What follows is the summary of a lecture that professor Stefano Petti has held in these days to her students at La Sapienza University.

In two recent publications, here and here, it speaks of the high efficacy of antibodies IgA: “Consistent with the fact that the Sars Cov 2 infected initially in the rhino-pharynx, IgA antibodies are produced rapidly after infection by the mucous membranes rino pharyngeal, and then remain elevated in plasma for at least 40 days after the onset of symptoms”.

Explains Breast: “The IgA are also called secretory or dimeriche, are antibodies that are all our mucous membranes and prevent the virus entering the human cell by blocking and then to mount the onset of the infection, and also the transmission of the same infection.”

Continues Breasts: “To activate the secretory IgA, the virus must come into contact with our mucous membranes; alternatively, there are antibodies in the blood, and lymphocytes anti-virus which activates only when the virus has already infected humans, and infection is even already in the circulating blood (an advanced stage).

A vaccine that is based on injections does not allow to produce secretory IgA, at this point, it can happen:

1) the vaccinated can get sick, probably in a milder form, but still with symptoms;

2) the vaccinated can become infected at the level of the rhino-pharynx to the and can transmit the infection to others, so the virus will continue to spread in the population, it will not disappear ever (the herd immunity, then, is not an option) and will have the opportunity to change dealing with the immunity given by the vaccine.”

In the light of this study, click here, argues Breasts: “The only vaccine that may work is inhaled through the various stages of the virus. But it should be administered in a short time the whole population to prevent the virus from muti. This was a great lesson in Sabin who undertook to administer the vaccination for polio in a very short time by using, in addition, the same route of transmission of the virus of poliomyelitis. The principle of using the same way to prevent disease dates back to China in the 1500 – it was called variolation – you took the pus of the sick, non-serious smallpox you essiccava and it was to inhale the children”.

The Sars Cov 2 it has already changed many times. Explains Breast: “Since it is RNA virus and mutations were expected already a year ago. Today, we know that some variants of the spike protein make it almost completely ineffective antibodies of the sick healed by the Covid. For example, in many patients, E484, mutation is very widespread in south Africa and Brazil, reduces 90% the effectiveness of the antibodies.

Similar mutations there are already several as demonstrated by the following article”. Click here.

The magazine Nature shows as in the many variants of the virus that go unnoticed in many Countries, here. Or here:Nature

It is not finished. Totally ignoring the presumed effectiveness of the vaccination campaign in the world, here he speaks of the transition of the Covid from pandemic to “endemic”. Or, as happened with the other 4 human coronaviruses, it is assumed that the Covid become a frequent disease. That is what happened with the last pandemic that affected Italy, the swine flu (H1N1 virus) in 2009, that reappears periodically in the waves of the flu.

Moral: the practice of vaccinations is seen as a metaphor for our life, for tomorrow there is no certainty…

More from Italy's Fight for Freedom:

“And if a vaccine worked is less than another?”

Covid, to be cured may be enough of a cold

“The lockdown? Are more effective discipline and hygiene”

Doctors in revolt against the obligation of the restaurant

The taxes of the italians to Bill Gates

As we heal in Phase 2

Make you ill to test the vaccines. Is it ethical?

A virus still not “human”

The new party which promises to abolish the obligation of vaccination