A hedge fund manager at XP Asset says the tight race is surprising for markets, and likely to spark a rally on Monday https://trib.al/8VcWCOJ 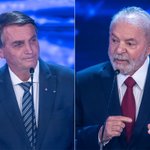 In Furious Tweetstorm, Trump Slams FBI And “Lyin'” Comey Ahead Of Critical Moment In Russia Probe

With only hours to go before Special Counsel Robert Mueller is expected to file two key sentencing documents related to the Russia probe that would outline the possible punishments facing former Trump Campaign executive Paul Manafort and former Trump attorney (and admitted liar) Michael Cohen, President Trump embarked on what may be his widest-ranging tweet storm in months, criticizing the FBI’s questionable handling of the Russia investigation and warned of a massive surge in illegal immigrant crossing at a “NON-WALLED” area in Arizona.

Statement from China: “The teams of both sides are now having smooth communications and good cooperation with each other. We are full of confidence that an agreement can be reached within the next 90 days.” I agree!

Following his attempt to reassure stock traders, Trump moved on to one of his favorite topics: attacking the news media and pro-immigration Democrats for leaving the Arizona border vulnerable to infiltration. He also demanded that Democratic leaders Nancy Pelosi and Chuck Schumer agree to funding for his border wall (Trump is expected to meet with the two leaders next week).

FAKE NEWS – THE ENEMY OF THE PEOPLE!

Arizona, together with our Military and Border Patrol, is bracing for a massive surge at a NON-WALLED area. WE WILL NOT LET THEM THROUGH. Big danger. Nancy and Chuck must approve Boarder Security and the Wall!

As BI pointed out, Trump appeared to be referencing the border patrol’s training exercise in Tucson, Arizona, where agents prepared “to deal with the potential of large crowds and assaultive behavior by caravan members, should a situation arise.”

Moving on from immigration, Trump referenced a report about the FBI’s decision to press ahead with its FISA warrants to spy on the Trump campaign despite knowing that its key piece of evidence – the infamous Steele Dossier – was “bogus”. Musing about Mueller, Trump wondered whether the Special Counsel’s many ‘conflicts of interest’, the ‘vicious’ record of his prosecutors and the “many contributions” made by the 17 Angry Democrats to the Clinton campaign would also be deserving of a mention.

Robert Mueller and Leakin’ Lyin’ James Comey are Best Friends, just one of many Mueller Conflicts of Interest. And bye the way, wasn’t the woman in charge of prosecuting Jerome Corsi (who I do not know) in charge of “legal” at the corrupt Clinton Foundation? A total Witch Hunt…

….Will Robert Mueller’s big time conflicts of interest be listed at the top of his Republicans only Report. Will Andrew Weissman’s horrible and vicious prosecutorial past be listed in the Report. He wrongly destroyed people’s lives, took down great companies, only to be……..

…..overturned, 9-0, in the United States Supreme Court. Doing same thing to people now. Will all of the substantial & many contributions made by the 17 Angry Democrats to the Campaign of Crooked Hillary be listed in top of Report. Will the people that worked for the Clinton….

….Foundation be listed at the top of the Report? Will the scathing document written about Lyin’ James Comey, by the man in charge of the case, Rod Rosenstein (who also signed the FISA Warrant), be a big part of the Report? Isn’t Rod therefore totally conflicted? Will all of….

The president also referenced a story  by Fox Business’s Trish Reagan that quoted Roger Stone ally Jerome Corsi, who said the FBI and Mueller had demanded he lie to help aid their investigation and implicate the president and Stone.

Jerome Corsi: ”This is not justice, this is not America. This is a political prosecution. The Special Prosecutor (Counsel), to get this plea deal, demanded I lie and violate the law. They’re the criminals.” He is not alone. 17 Angry Dems. People forced to lie. Sad! @Trish_Regan

With President Trump already firing off more tweets – even as the market remains on edge over what Trump will say, potentially unleashing another furious selloff – one imagines the stream-of-consciousness bursts will continue throughout Friday as Mueller releases his sentencing guidelines for Manafort and Cohen, and setting the stage for the final showdown with the president.

In Furious Tweetstorm, Trump Slams FBI And “Lyin'” Comey Ahead Of Critical Moment In Russia Probe