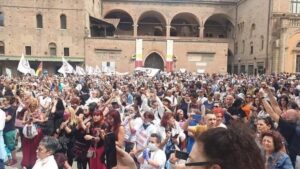 “You want to tell about the protest? Go and consume the soles of shoes, smell the air“taught the chief chronicler.

Here I am in Bologna, in an overflowing Neptune square. Thousands of people listening to those who harangue the crowd from the stage. There are many and everyone listens (it seems obvious but it is not: think that at the student marches many go there so much to do and, just as many, to stick a political label on us).

To gather us is the initiative “Primum not nocere“promoted by the Free choice: there is one in each region and they are coordinated among themselves. They have grown gradually in response to the health policy of recent years.

First to challenge the Lorenzin law that, in 2017, tied the obligation of 10 vaccinations to attend schools. Without the sting filet, no school(alternatively, you pay). Unheard. But courts, politicians, newscasts and television debates all resoundingly agreed. Then came the radiation of those doctors who said they were cautious and perplexed in the face of the vaccine load. Doubly unheard of: only a few years before my pediatrician Asl allowed herself the luxury of suggesting me which vaccines to do and which not. Too bad that today this transparent doctor-patient relationship has become a memory.

And that now all of us, as a result of the pandemic, risk becoming guinea pigs for life of vaccines that will come on the market.

“Eliminated the first right (choose or refuse a health treatment that may have risks) also fell others – lists them from the stage Gian Marco Capitani of the free choice movement Emilia Romagna – not being able to work or study on ‘ condition…‘, not being able to move on’ condition…’. Rights are not something that someone grants you, but something that no one can take away from you‘, (sentence of Ramsey Clarck). Let’s wake up, those who sleep in democracy risk waking up in dictatorship”.

Each square is, in its stratifications, also the squares of yesterday, a memory of our ancestors. The streets that lead into Via D’azeglio where Lucio Dalla lived, have as luminaries the words of famous songs. Look up and, almost a prophecy, it appears “who knows what we’ll get our hands on tomorrow…”. A little further there is the intersection with via Rizzoli, where in 1926, the young anarchist Zamboni shot Mussolini without killing him. That gesture ended in a bloodbath, the anarchist was beaten by the squads. Violence brings violence. Behind the stage, next to today’s manifesto “Primum non nocere “is the plaque of 1945, gold medal for military valor, in memory of the fallen, who”led the homeland to the reconquest of freedom”.

Today’s Square speaks another language but remains centered on freedom. Here find the list of speakers. From the parliamentarian Sara Cunial, to the doctor Dario Miedico (removed at the end of his career from the same order that celebrated its 50 years of activity), from Paolo Allegri, Doctor of Hippocrates, the network that has treated at home from Covid 15 thousand patients), a Senta Depuydt, president of the Children’s Health Defense Europe, the children’s Health Association founded by Robert Kennedy Jr.

There are many children, they play on the plaids lying on the ground, many of them did not attend public school “so as not to submit to the blackmail imposed by Lorenzin” explains a mother. So homeschooling was born, with dozens of children, school is also in the middle of nature. “I never thought I would be able to set up such a beautiful reality starting from a moment of great despondency,” says a teacher who is also a mother.

“We are here today, then we will go to Rome and again to every city in Italy – the promise is raised from the stage – . Resist”. In response a thunderous roar. And then the dances. Click here.

The feeling of the day but also the deep sense of the ongoing change was well evoked by Antonio Bilo Canella, actor, author and director who spoke about the action of the spirit in history.

“I am the son of a doctor and I am still moved when I read the words of the oath of Hippocrates, how much spirit there is in those promises…. Doctors swear not to undertake inappropriate and proportionate therapeutic interventions.” And again: “everything that is happening is the work of the spirit and the end, whether it will be sooner or later, will depend on us, when we finally understand”. Listen to him, he deserves it. Here.