Hopefully, this will begin to make these attackers less willing to attack in the future. 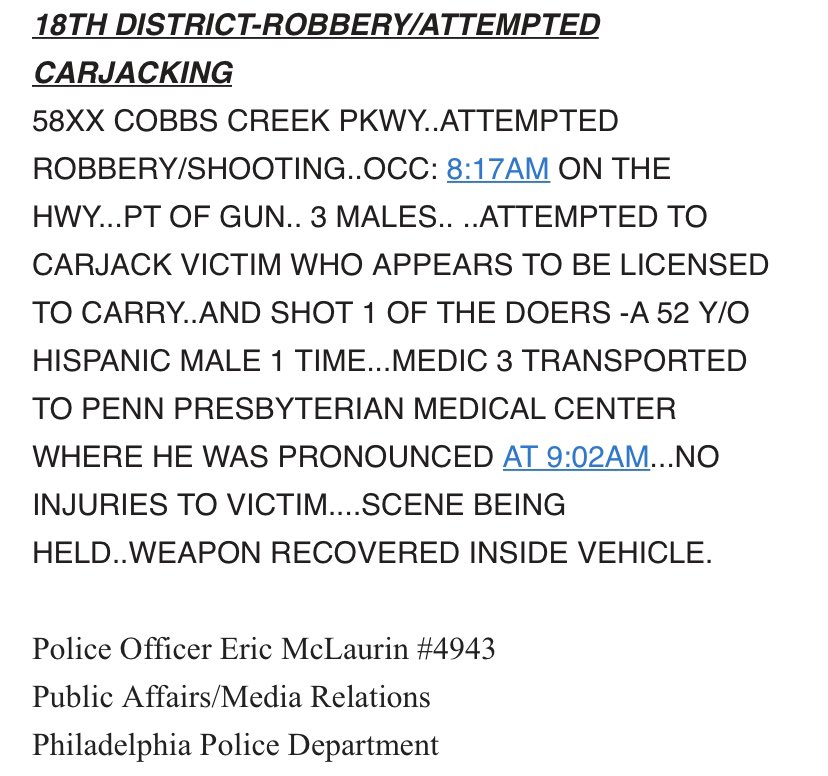 Breaking: CARJACKER KILLED @phillypolice by Another driver with license to carry concealed weapon. 3 males tried to carjack victim who shot&killed one of 3 carjackers 8:17am. Driver had gun pointed at him on Cobbs Creek Parkway&driver shot 52yr old carjacker dead @FOX29philly

On WIBC In Indianapolis:Discussion On Democrats Fighting To Make Mail-In Voting Permanent https://crimeresearch.org/2022/01/on-wibc-in-indianapolisdiscussion-on-democrats-fighting-to-make-mail-in-voting-permanent/

Gun Control Myths: The lie that AR-15s are the weapon of choice of Mass Public Shooters https://crimeresearch.org/2021/03/gun-control-myths-the-lie-that-ar-15s-are-the-weapon-of-choice-of-mass-public-shooters/ via @CrimeResearch1

In the Missoula Current: Tester must stand against runaway spending, socialist Sanders

As government spending spirals out of control, where is Montana Sen. Jon Tester? As a member of the Senate Appropriations Committee in an evenly divided Senate, Tester could stand against the government entitlements increases that socialist Sen. Bernie Sanders is openly pushing for.

But Tester has yet to publicly speak a single critical word. Instead, Democratic Sens. Krysten Sinema (Arizona) and Joe Manchin (West Virginia) have born the brunt of the debate.

Indeed, Tester has tried to distance himself from Manchin. When Politico recently asked Tester about Manchin’s proposals, Tester replied: “Are you crazy? Are you trying to get me shot? I’d never, ever want to be aligned with Joe Manchin.”

It is easy to promise families $3,600 per child under age 6, and $3,000 per child age 6 – 18. It’s easy to promise free community college, three months of paid family and medical leave, universal pre-K public schooling, government-paid abortions, and expansion of Medicare coverage, among countless other programs.

Tester keeps assuring Montanans that this new spending won’t increase the debt, but the entitlements bill uses many revenue gimmicks to support that claim. It counts tax revenue over the next ten years, but spending programs over only the next few years. Democrats such as Tester surely have no intention of ending these programs after a few years, and they think that Republicans will have a hard time cutting benefits once people get used to them. So, the true cost of the bill is trillions more than the purported revenue.

The press reports on “cuts” to reduce the new entitlement spending from $3.5 to $1.9 trillion, but once again this involves some fudging of the numbers. But again the reduction is at least partly due to deceptively counting the spending over a shorter period of time.

The debt keeps growing more quickly than most people understand. Last September, the Congressional Budget Office (CBO) predicted that the federal debt wouldn’t hit $29 trillion until 2028. Now the debt stands at over $28.9 trillion and is set to surpass $29 trillion within a couple of weeks.

Our entire national income (GDP) is $22.72 trillion. Only Greece and Italy are European countries with higher debt to income ratios, and both are known for their constant debt problems.

The current spending proposals could put the country on the path to a debt of $50 trillion by 2030. In a few years, it will reach $40 trillion.

But the debt will likely be bigger than predicted. The CBO assumes that people never change their behavior, so it doesn’t consider the fact that increased taxes consistently bring in less revenue. But there is another problem. The CBO assumes interest rates on the national debt won’t reach 2% until 2027. That is a big assumption. With a debt of $40 trillion, each additional 1 percent rise means $400 billion more in annual payments on the national debt.

To finance the debt, the U.S. Treasury has to sell bonds. Currently, the interest rate on ten-year U.S. Treasury bonds is just 1.65%. But from 1990 to 2020, the rate averaged 4.4%. Over the sixty years from 1960 to 2020, it averaged 6.0%. Even a 4.4% rate would mean a massive increase in interest payments, adding over $1 trillion to the annual deficit. Soon, we will find ourselves borrowing more just to pay the interest on the debt that we already owe.

Jon Tester often claims to be a moderate Democrat. But on taxes and spending, he has aligned himself with self-declared socialist Bernie Sanders, not Democrats Joe Manchin or Krysten Sinema.

In the Missoula Current: Tester must stand against runaway spending, socialist Sanders