Mauldin: Everything Is Broken https://www.zerohedge.com/markets/mauldin-everything-broken

Jack Dorsey Is Auctioning His First Tweet Ever As An NFT... And It's Now Worth Over $2MM https://www.zerohedge.com/crypto/jack-dorsey-auctioning-his-first-tweet-ever-nft-and-its-now-worth-over-2mm

'Fear' Is The New 'Smart' https://www.zerohedge.com/political/fear-new-smart

US carriers around the world 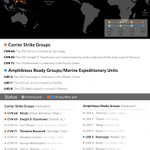 When it comes to the Middle East, China has not been shy about its recent ambitions to expand its geopolitical influence in the Gulf region: Just last week we reported that the Chinese Ambassador to Syria, Qi Qianjin, shocked Middle East pundits and observers by indicating the Chinese military may fill the void left in the wake of the collapse of ISIS – and most regional armies – and directly assist the Syrian Army in an upcoming major offensive on jihadist-held Idlib province.

The “[Chinese] military is willing to participate in some way alongside the Syrian army that is fighting the terrorists in Idlib and in any other part of Syria,” the ambassador said in an interview with the pro-government daily newspaper Al-Watan, subsequently translated by The Middle East Media Research Institute (MEMRI).

And having staked a military claim in Syria, China was next set to expand its national interest in that other key regional nation which has been the source of so much consternation to its neighbors and world powers in recent months and which has emerged as a key source of crude oil exports to Beijing: Iran.

To many the move had been expected, with only the details set to be ironed out. Recall that back in May we wrote that CNPC – the world’s third largest oil and gas company by revenue behind Saudi Aramco and the National Iranian Oil Company – was set to take over a leading role held by Total in a huge gas project in Iran should the French energy giant decide to quit amid US sanctions against the Islamic Republic.

That finally happened when the Chinese energy giant took advantage of Trump’s sanctions to step in the void left by the French major. As a reminder, Total signed a contract in 2017 to develop Phase II of South Pars field with an initial investment of $1 billion, marking the first major Western energy investment in the country after sanctions were lifted in 2016. South Pars has the world’s biggest natural gas reserves ever found in one place.

And after hen the French company said it would pull out unless it secured a U.S. sanctions waiver  – which it was unable to do – in June, the deputy head of the National Iranian Oil Company, Gholamreza Manouchehri, said that CNPC would take over if Total were to walk away.

“China National Petroleum Corp (CNPC) has replaced Total of France with an 80.1 percent stake in the phase 11 of the South Pars (gas field),” IRNA quoted Mohammad Mostafavi, director of investment of Iran’s state oil firm NIOC, as saying, although there was no immediate confirmation of the IRNA report by CNPC.

Following the transaction, CNPC – which earlier held a 30% stake in the project – will now hold an 80.1% stake in the prokject, having taken over Total’s 50.1% share. The remainder is held by Iran’s Petropars.

Total has not yet said what it would do with its stake following the pull out, and it has until Nov. 4 to wind down its Iran operations. Total had spent €40 million on the project by May when it said it would have to withdraw from Iran if it couldn’t secure sanctions waivers from the U.S. Treasury.

So is China willing to risk Trump’s wrath and suffer economic sanctions for taking over where Total left off? It certainly looks like it: back in May we wrote that CNPC will use its banking unit, Bank of Kunlun, as a funding and clearing vehicle if it takes over operation of South Pars. The bank was used to settle tens of billions of dollars worth of oil imports during the UN sanctions against Tehran between 2012 and 2015, and is thus well-equipped to skirt US sanctions.

Sure enough, the US Treasury sanctioned Kunlun in 2012 for conducting business with Iran, however since most of the bank’s settlements during that time were in euros and Chinese renminbi, there was little it could do in terms of credible punishment.

If CNPC goes ahead, it would also likely have to develop crucial equipment, such as large-powered compressors needed for developing gas deposits on this scale, on its own. And since leading manufacturers like U.S. firm GE and Germany’s Siemens could be barred from supplying to Iran under US sanctions, it means even more Chinese companies will find willing demand for their services in Iran.