Where in the bubble are we: Virgin Galactic pares gains of as much as 6.8% after CNBC clarifies that Chanos was only joking about being "positive" on space companies

Since there seems to be some confusion in the markets, Jim Chanos tells me he was JOKING when talking "positively" about space-related companies, which may be moving on his perceived bullish comments. It was a joke, folks. Back to your regularly scheduled trading...

Meet The Network That Could Be Poised To Dethrone Ethereum https://www.zerohedge.com/crypto/meet-network-could-be-poised-dethrone-ethereum

Since there seems to be some confusion in the markets, Jim Chanos tells me he was JOKING when talking "positively" about space-related companies, which may be moving on his perceived bullish comments. It was a joke, folks. Back to your regularly scheduled trading... 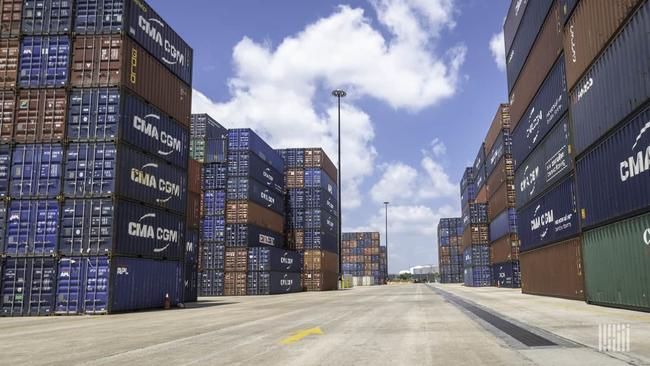 A report released Monday by investment bank Jefferies warned of “empty shelves and raided storerooms,” noting that “it’s not j...

As concerns of a Covid-19 outbreak increase across the US, Costco stores across the country are experiencing the second weekend of Americans panic buying food, water, and hand sanitizers.

We noted last weekend how the “great panic of 2020 is underway” as Americans made a mad dash to Costco stores and other big-box retailers to hoard supplies.

“We attribute this to concerns over the coronavirus,” Galanti said.

Stock prices for Walmart and Target have also benefited from the spread of the deadly virus, as people preparing for a quarantine situation load up shopping carts with bottled water, canned soup, instant mac and cheese and everything else that they could possibly need to wait out the virus. But the panic-buying has been leading to shortages and leaving people on edge. –WaPo

On the East Coast, tens of millions of Americans woke up on Saturday morning and heard the news about 44 total confirmed virus cases in New York, with a majority in Westchester, a suburb of NYC. PIX11 News’ Cristian Benavides tweeted a video of the panic that is developing in NYC this morning. He shows a long line of cars waiting to get into a Costco in Astoria, a neighborhood in Queens.

Here’s another look at the line for Costco in Astoria that continues to grow. As New Yorkers stock up on supplies over coronavirus fears @PIX11News pic.twitter.com/KQ75Yz3J6r

ABC13 Houston reported, “We’re seeing extremely long line at the Costco on Richmond this morning. Many people are trying to stock up on sanity items and water amid the coronavirus fears.” 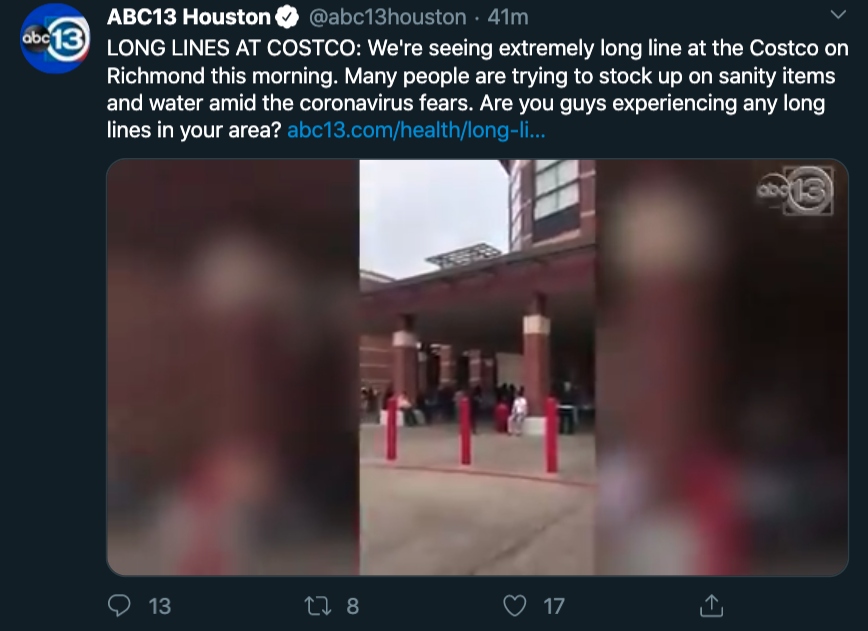 Stamford Plus magazine tweeted a picture of a Costco in Connecticut with “much bigger than usual” crowds.

The crowds in Costco in Connecticut are much bigger than usual for Saturday #COVID19 #coronavirusinCT pic.twitter.com/fDuUq3O6wL

One Costco shopper was spotted in a hooded bio hazmat suit at an unidentifiable store.

Yeah, now it’s around the side of the building, Costco employee just told everyone 2 toilet paper items each… I’m. Just here for the cookies…#panickbuying #COVIDー19 #keepcalmandwashyourhands pic.twitter.com/UsgsJJBtbA

LA Times’ Laura Blasey said the Costco in Arlington, Virginia, looked like “the set of the new Mad Max movie” as hand sanitizers, masks, and rubbing alcohol were all sold out.

Scenes from the Arlington Costco/the set of the new Mad Max movie pic.twitter.com/f21nlZjKM9

At the local Costco – limits as people are panic buying because of #COVIDー19
#SaturdayThoughts #SaturdayMorning pic.twitter.com/rbIqReRJuw

A Costco in Los Angeles this morning saw long lines wrapping around the parking lot.

“Costco is lit today” – more buying panic at another Costco tweeted one user.

Costco is lit today. They be rationing the water and TP too. pic.twitter.com/5HKUFLEDMi

Buying panic was also seen at a Costco in the UK.

Panic buying and stockpiling of toilet roll continues. These are the scenes at Costco in Farnborough in Hampshire today. #coronavirus #toiletpaperpanic #panickbuying pic.twitter.com/JLlZVVS7EH

Another Costco in Canada with long lines — and the store hasn’t even opened.

The Apocalypse is here….Yikes! This is at the Costco at Still Creek on a Saturday morning. And it’s still 25 min till opening. LOL pic.twitter.com/bYapV2GwCJ

One Twitter user reported that a line spans “down one whole aisle and around to the next”  developed inside one Costco as people are waiting on today’s delivery of goods.

The line at @Costco for water wraps down one whole aisle and around to the next. Store opened early, and they’re out, waiting on today’s delivery. #costco #panickbuying #coronavirusaus pic.twitter.com/BGb248kEdQ

The rising fears of a pandemic as confirmed virus cases and deaths soar will only force more and more Americans to big-box retailers to hoard food and water. This soon could result in a shortage of goods.

We warned you several years ago that Venezuela was coming to America. Who knew it would be caused by a virus.