Maybe Kashkari should learn to cook 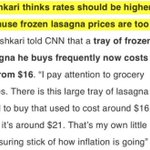 President Donald Trump’s campaign was never given a defensive briefing by the FBI, despite mounting concerns that Russians were allegedly trying to penetrate the campaign during the 2016 presidential election.

In testimony provided by former Attorney General Loretta Lynch, along with others, it is the key finding that won’t bode well for the FBI and DOJ. It also raises significant questions regarding the treatment of Hillary Clinton’s campaign and whether she ever received ‘defensive briefings’ in detail from the bureau. Lynch’s testimony is still not public but has been reviewed by SaraACarter.com.

The defensive briefing, after all, is a procedure that is often given to presidential candidates, elected officials and even U.S. businesses that have either been unwittingly approached by foreign actors attempting to gain trust and befriend those in position of influence.

The briefing allows the government to protect the candidates, specifically if there is substantial information or knowledge to suggest that someone has targeted an unwitting American for information. If the FBI or intelligence agencies suspect foreign adversaries may be trying to penetrate a presidential campaign, as those FBI and DOJ sources suggested in testimony to lawmakers, it would then be required to warn those affected, a senior former intelligence official told SaraACarter.com.

Why? Because foreign adversaries like China and Russia for example, and even allies, will attempt to glean information – or favor – from unwitting persons with access to senior level officials. The access can assist those nation’s own national interest or provide access for intelligence collection.

In the case of Trump, the FBI gave only a general counterintelligence briefing but did not provide information to the campaign that the FBI believed there were specific counterintelligence threats. For example, the FBI’s concern over campaign advisors George Papadopolous, Carter Page and then concerns over former national security advisor Lt. Gen. Michael Flynn.

“It is an essential task of the FBI and the intelligence community to give a defensive briefing to a presidential candidate when a foreign adversary is attempting to penetrate or make contact with someone in the campaign,” said a former senior intelligence official.

“If the FBI and DOJ were so concerned about Carter Page and (George) Papadopolous why didn’t they brief Trump when he became a candidate? The fact that they didn’t is very revealing. If they gave defensive briefing to the Clinton campaign then I think we have the answer.”

Bruce Ohr’s 268-page testimony, released last week by Georgia Rep. Doug Collins reveals the machinations of the FBI’s investigation into the Trump campaign and the players involved. Ohr’s testimony coupled with testimony provided by former U.S. Attorney General Loretta Lynch, which has not been released but reviewed by this reporter, along with former FBI General Counsel James Baker’s testimony reveals a startling fact: everyone appeared to say they were concerned the Russian’s were penetrating the Trump campaign but no one at the DOJ or FBI authorized a defensive briefing.

Lynch and Failure to Give Defensive Briefing

Let’s start with Lynch’s testimony, which has not yet been made public.

In her testimony, Lynch she admits that senior officials at the FBI and DOJ did not provide a briefing to then candidate-Trump. Those discussions, according to Lynch, also included former FBI Director James Comey. It appears they all discussed that the defensive briefing was an option but never followed through. None of those persons who testified about those discussions has a clear answer to why none was given.

“Were you aware that George Papadopoulos was under investigation by the FBI,” an investigator asked Lynch during last years closed door hearing.

“I was aware that his activities were of concern,” Lynch replied.

“Were you aware that he was associated with the Trump campaign,” the investigator followed up.

Lynch then says, “you know, I knew that but, again, I don’t have specifics and certainly at that – thinking back to that time, I don’t know if I knew his role at that time in the campaign.”

The investigator then presses Lynch, asking “did you know he had some sort of role?”

“As far as my recollection is, yes,” Lynch answers.

The investigator goes one step further:

“So there are these investigations launched into two individuals, in your mind, somehow associated with the Trump campaign…Did you consider any other options other than an investigation?”

The investigator then asks was “defensive briefings given to candidates for the presidency?”

“Certain types of defense briefings are, is my understanding,” Lynch states.”It’s not something that I was personally involved in. They received – they do receive security briefings. I’m only aware of that from discussions with members of the intelligence community.”

“Did you ever discuss whether the Trump campaign should be defensively briefed on either Carter Page or George Papadopoulos,” asks the investigator, who reiterates if they were under scrutiny whey didn’t the FBI and DOJ make Trump aware.

When asked if Lynch was involved in discussing defensive briefings with the Trump campaign about Carter and Papadopolous, she only replies “not to the level of giving direction.”

“Again, I’m just being careful because of the nature of the information,” she stresses. “Certainly, it’s always an option, but at a very early stage, you would have it as an option, and you would evaluate it as time goes on, and I don’t have any information about further resolution of that issue.”

Lisa Page’s testimony may answer some questions as to why the Trump campaign was not given a defensive briefing.

She states that Trump was not a target at the time but that it was members of his campaign that the bureau was concerned about.

This makes no sense at all. If the FBI was concerned about allegations that Carter Page and Papadopolous were allegedly being influenced by the Russians they would’ve given Trump, who was a presidential candidate at the time, a defensive briefing.

The FBI had worked with Carter Page in the past on a separate case connected to Russia so why wouldn’t the FBI provide a fair warning to Trump when Carter Page joined as a volunteer for the campaign.

In Page’s transcript she indicated to Rep. John Ratcliff, R-Texas, under questioning that the bureau had no evidence of collusion between the Trump campaign and Russia prior to launch of the FBI and special counsel investigation.

“So I think this represents that even as far as May of 2017, we still couldn’t answer the question,” said Page, who said that up until May 2017 the bureau still didn’t have any evidence of collusion or conspiracy.

Under questioning by then-Rep. Trey Gowdy, R-SC, regarding her text messages to Strzok, Page states that the bureau was concerned about someone in the campaign was working with Russians to get damaging information on Clinton. But she admitted that they still didn’t have evidence up until May 2017?

“We had a number of discussions up through and including the Director regularly in which we were trying to find an answer to the question, right, which is, is there someone associated with the campaign, who is working with the Russians in order to obtain damaging information about Hillary Clinton,” Page told Gowdy, regarding the texts.

She also says later in her testimony to Gowdy “as I sort of explained, if he is not going to be President, then we don‘t need to burn longstanding sources and risk sort of the loss of future investigative outlets, not in this case, but in other Russia–related matters…”

Page states that the FBI didn’t believe Trump was colluding with Russia but maybe someone was within in the campaign. In her mind Trump wasn’t going to win so why “burn longstanding sources.”

The one question I would’ve asked those testifying, is the one question the lawmakers never asked: ‘Did the DOJ and FBI provide defensive briefings to Hillary Clinton’s campaign at any point in time and on any matter involving any foreigners attempting to access her campaign?’

If anything, this is a significant question that DOJ Inspector General Michael Horowitz should consider as he continues his investigation into possible malfeasance in the FBI’s handling of Trump campaign and Russia investigation.