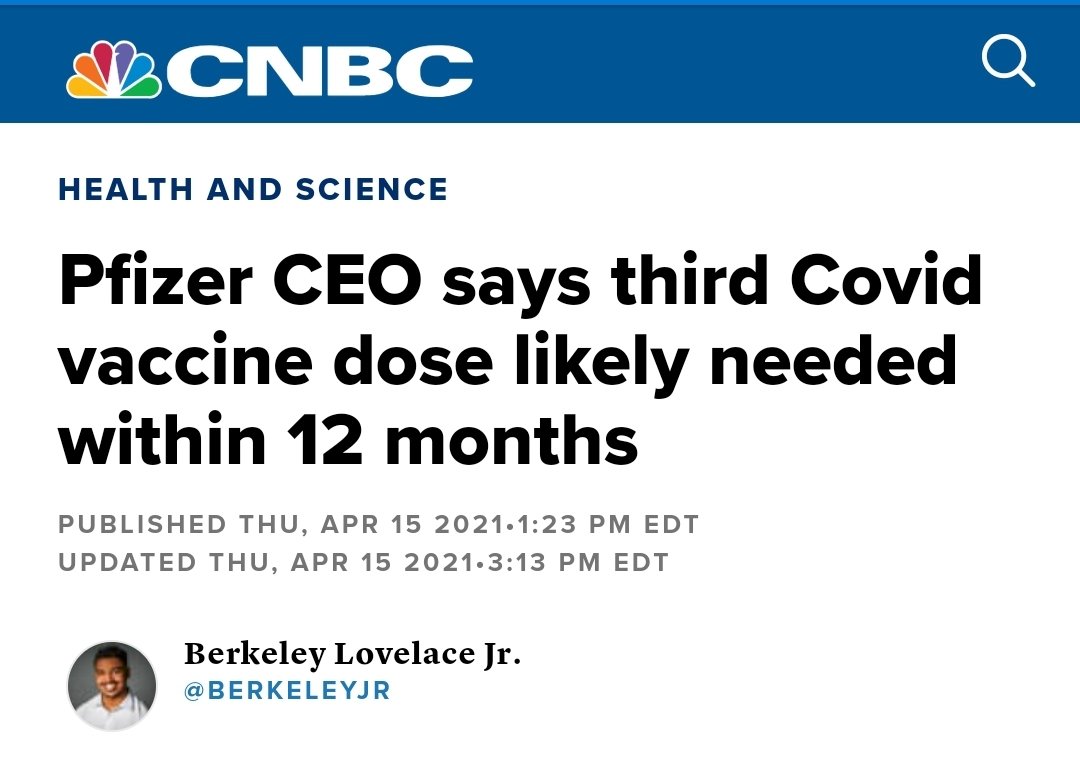 UNDER PRESSURE Rachel Maddow is Turning On the Pressure; J&J Vaccine Suspended over Blood Clot Concerns; The China/US Covid Connection; A New Truth A...

The most disturbing aspect of all of this is that only yesterday, claiming that the Johnson and Johnson vaccine may not be entirely safe was a violation of YouTube’s “community guidelines” and could have resulted in an immediate removal.
... do you feel free?

The public vaccination discussion and narrative is in a tug-of-war battle. On one side is the long-standing, settled science of the ‘safe and effective’ narrative with zero room to allow research or facts which run counter to the over-simplistic public relations slogan. On the other side is a runaway, multifaceted awakening to inconvenient truths about vaccines and the people who push them, which is regularly unsettling the science while leaving unanswered questions and gaping holes in the arguments of pro-vax authorities.

The ‘official’ line held by corporate media outlets and health authorities has historically been to ignore any challenges to their oversimplified vaccine narrative. Meanwhile, political leadership has, and still is, racing behind the scenes pushing through legislation to establish mandatory vaccination and tracking systems. It appears such passive censorship is no longer working. An entirely new program appears to be in play. More offensive-minded than previous efforts to simply ignore challenges to the current vaccine paradigm, these new methods seek to bring in both classical, authoritarian censorship while attempting to erase the idea that opposition to vaccines ever existed.

Recently, multiple media outlets ran with the story that both Twitter bots and Russian Twitter trolls are amplifying the online vaccine debate and thus “shaking confidence” and “eroding public consensus on vaccination.” Using data from a new study, it has been the media’s interpretation of the data that has taken on a life of its own. According to the study, 93 percent of the tweets examined that were both “more polarized and more opposed to vaccination” than average users came from Twitter accounts the researchers admitted were from “ultimately unknown” origin. In other words, the highest proposition of ‘anti-vax’ troll activity, according to the study, could have actually been people who oppose the mainstream narrative of vaccines in any way and tweet about it often. Of the roughly 1.7 million tweets collected over a 3-year span used in the study, only 253 were “uniquely identified with Russian troll accounts.” According to the study, among those 253 tweets, “43% were provaccine, 38% were antivaccine, and the remaining 19% were neutral.”

With such unimpressive findings, why did the mainstream media fall all over themselves to push this ‘nothing burger’ story out claiming the Russians and Twitter bots were weaponizing health communication on social media? Was it just a one-time sensational headline to get ratings?

Unfortunately, just one week prior to the Russian story, the public was forced to endure another inaccurate round of pro-vaccine propaganda disguised as reporting. Fortune, USA Today, and many others ran variations of a headline stating the US Centers for Disease Control and Prevention (CDC) was monitoring a measles outbreak in 21 states. The shock headlines were in response to the CDC’s uneventful release of US measles data. After both the media frenzy and public alarm being generated by the inaccurate and dangerous reporting, the CDC was forced to issue the following statement:

“There is NO current multi-state #measles outbreak in US. Some recent media reports misinterpreted CDC data. Number of US-reported cases in 2018 is similar to recent years & in expected range.”

Unfortunately, media outlets didn’t change their headlines and reporting to reflect the new reality. By not changing their headlines, even when it was brought to their attention, media outlets broke not only their own self-claimed editorial standards of accuracy, fairness, transparency, and lawfulness but perhaps also sections of their state’s Penal law. For example, New York-based Fortune whose reporting claimed there was an ongoing, 21-state measles outbreak may have acted in opposition to NY Penal Law section S240.50 falsely reporting an incident in the third degree. The section says it is a class A misdemeanor for falsely reporting an alleged occurrence or impending occurrence of an emergency using baseless information.

Why are large media outlets willing to risk what little integrity and trust they have left by drumming up fear around nonexistent outbreaks to reinforce the need for vaccination?

Even academia has joined the movement to erase common sense and inconvenient truths about why people would abandon trust in the current ‘safe and effective’ vaccine narrative. Parental vaccine choice has now become parental vaccine hesitancy as researchers pour grant money into finding the cause of why parents won’t fully vaccinate their kids without question. Social media, and the free Internet as a whole, continually shoulders the blame at every turn for creating distrust in health interventions such as vaccines. Real vaccine injuries and known mechanisms for those injuries continue to be ignored while social media and the overall free flow of information on the Internet is  targeted for heavy-handed, government sponsored censorship.

Big tech companies are currently facing opposition for broadly applying Chinese-style social media censorship in America across certain political spectrums and voices. Pro-vax US politicians have jumped at the opportunity to use those same big tech capabilities to silence online vaccine opposition and discussion by authoring bills to accomplish such ends. Citing ‘fake news’ and ‘Russian trolls’, Sacramento Senator Richard Pan’s SB-1424 is the frontrunner of un-American attempts to kill online vaccine debate and investigative journalism as a whole.

Despite endless, growing numbers of parents telling tragic stories of their once-healthy children regressing into autism or other neurological disorders after vaccination, there also exists a large body of science completely corroborating such events. At best, it is highly insulting when an entire cross-section of people and available science is rendered invisible by the media and government leadership in return to chase fanatical, dead end stories about Russian Twitter bots. It hints at an agenda when media fabricates fear-based stories attempting to justify the need for vaccines. How does the public really feel?

Outside the US, major strides are being made showing possible mechanisms for a vaccine-autism connection. Author and co-founder of Generation Rescue J.B. Handley attempted to spotlight the international science now showing the vaccine-autism connection only to have his entire account and body of work promptly censored and erased by Medium.com. Handley went on to write the much anticipated book “How to End the Autism Epidemic” out September 19 – already a number one new release in Popular Child Psychology on Amazon.

There appears to be a move to limit online information, no matter how accurate and true, that flies in the face of the current, embedded vaccine paradigm. At the same time, a rapid awakening spanning multiple sectors of academia, healthcare and the public also appears to be racing towards some greater understanding of the inconvenient truths about vaccines that have been, and still are, ignored and suppressed.