Outside of the GFC, and the Corona virus pandemic, we have not seen a sharper 15d tightening of financial conditions this century: GS 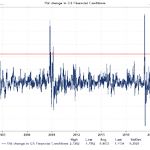 In addition to the selfless human heroes who continue to fight the unprecedented global pandemic on its front-lines, there has also been a lesser covered group of virus-fighters, dutifully going about their daily tasks to help battle the virus.

We’re referring to the global robot army that has been deployed to fight the virus.

Robots worldwide are doing everything from bathing surfaces with radiation, sanitizing floors, scanning for fevers, spewing anti-microbial gas and enforcing mask wearing, according to the WSJ. Many of the robots are being put to work in areas where humans haven’t tread yet, especially in areas like hospital cleaning.

For example, at Cincinnati/Northern Kentucky International Airport, there’s a robot that disinfects and dispensing germ-killing fluid from its tanks. The robot weighs 1,050 pounds and is equipped with AI and a bank of cameras and sensors. Similar robots are already being used en masse at Changi in Singapore. 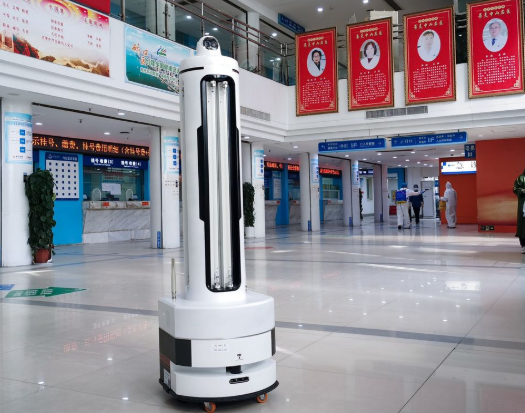 When the outbreak happened in China, UBTech Robotics, based in Shenzhen, China, developed a program to modify its robots to battle the virus. They attached a disinfectant sprayer to their Atris outdoor robot, which allows it to spray in public places.

They have also modified two other models, the Cruzr and Aimbot, to be able to take people’s temperature using thermal cameras. The robot’s object-recognition algorithms allow them to also determine whether or not a person is wearing a mask.

Other robots are using UV light in indoor spaces to disinfect. UVC lights have long been used in hospitals to disinfect and sanitize rooms. Since the lights are harmful to humans (but also lethal to microbes), no humans can be in the room while disinfecting is taking place.

UVC lights can clean an entire room in anywhere from 10 minutes to an hour, depending on the strength of the bulb being used. They can also reach surfaces often missed by human cleaners and kill airborne microbes – a feature that could come in hand if the coronavirus is spreading by people breathing in particles in indoor spaces.

Companies like UVD Robots, launched in Denmark in 2014, are working to try and implement these lights in a safe way for humans, on top of robots that can wander public spaces. Demand for UVC disinfecting robots has “exploded” by 2x to 3x since December of last year, CEO Juul Nielsen says. They are being considered for places like warehouses, prisons and offices and are operating in a manner similar to the way robots are used in areas like melted down nuclear power plants.

Some of the outlook for the industry remains unclear and it is possible that the idea of autonomous robots that clean may lose some of its glimmer after the coronavirus fades. They may also turn out to not be cost effective, compared to traditional manual labor which can easily clean tough to reach surfaces, like door handles.

But Jenny Lee, a 15-year veteran of venture-capital firm GGV Capital, thinks that the focus on robots now will translate to a broader focus on automation going forward. She hopes companies will continue to work on robots with smaller form factors and more autonomy.

Benjamin Tanner, chief executive of Austin, Texas-based Microchem Laboratory said: “There are manufacturers who have done no testing of their own, and it’s a little bit of buyer beware on the UV market.”

John Rhee, general manager of UBTech Robotics North America concluded: “We talk about flattening the curve, but the need to be vigilant and have increased monitoring and have measures in place to decrease transmission are things that organizations both public and private will have to take seriously for a very long time.”