Another Iconic Deflationist Capitulates: According To Russell Napier, "Control Of Money Supply Has Permanently Left The Hands Of Central Bankers https://www.zerohedge.com/markets/another-iconic-deflationist-capitulates-according-russell-napier-control-money-supply-has 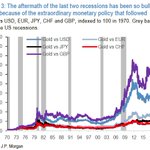 What Economists Can Teach Epidemiologists https://www.zerohedge.com/markets/what-economists-can-teach-epidemiologists

“New Deals Are Being Canceled”: Emerging Markets Increasingly Locked Out From Access To Capital

Following the recent rout in emerging markets, the biggest threat that has emerged to this bloc of nations is neither their slumping currencies – after all, this is a self-correcting mechanism which makes their exports more attractive and following a period of correction which bolsters trade and current account balances, the EM economies should see a rebound in output – neither the sharp drop in local asset prices, which while painful should also rebound once the underlying economy stabilizes. Instead, what is of highest concern to emerging markets is that with local debt at nosebleed levels, and with dollar-denominated indebtedness at all time high levels and in need of being periodically rolled over, a domino effect of defaults could emerge if the countries find themselves locked out of global capital markets.

That’s exactly what is happening now, because after a record 2017, emerging-market debt issuers issued less money abroad in June, July and August than in any summer since 2013’s taper tantrum, when fears that the U.S. was rolling back monetary stimulus triggered a broad selloff across bond markets.

As the WSJ writes, “the current falloff underscores the changing dynamics for emerging markets, which benefited from years of central bank stimulus and a recent period of synchronized global growth.” Now, with U.S. interest rates rising and with the dollar surging, making debt more expensive at a time of heightened concern over trade protectionism and domestic problems in giants like Turkey and Argentina. Incidentally, as we have shown before, it is these two nations that have some of the highest current account deficits as a % of GDP, and are in greatest need of finding foreign investors who will keep injecting capital into their economies, or else risk a sharp economic contraction if not outright depression.

Some numbers: emerging-market companies raised $28 billion in bonds outside their home market, mainly in dollars, this summer, a fall of more than 60% from last year, according to Dealogic. At the same time, governments raised $21.2 billion, a drop of more than 40%.

Today, after a year of unbridled emerging market investor euphoria, the new issuance market appears to ground to a halt: new deals are being postponed or canceled and issuers coming to market are paying far more to generate interest for their dollar debt.

Some can’t afford what investors demand: in early August, Indonesian property developer Intiland Development pulled an up to $250 million three-year bond deal despite offering a juicy yield of 11.5%. Theresia Rustandi, the company’s corporate secretary, said they withdrew the deal because of unfavorable market conditions.

Others are still finding willing investors but this comes at a price: higher interest rates. Last week, Chinese petrochemical giant Sinopec, set out to raise $3 billion in debt but ended up with $2.4 billion as investors demanded a higher return from China’s largest oil refiner.

No imminent change in sentiment is expected, as investors and bankers expect issuance to stay subdued for the rest of the year as the turmoil raging across emerging markets continues:

“You would expect volumes to be lower than in 2017, when all the stars aligned,” said Samad Sirohey, head of debt capital markets for central and Eastern Europe, the Middle East and Africa at Citigroup . But “the last four months have been really subpar,” he said.

Making matters worse, in a toxic feedback loop, the lack of funding leads to fears about defaults, and even slower economic growth. The concern is that a falloff in credit growth will impact economic growth while making it more difficult to pay off outstanding debt. Asian companies, for instance, have $38 billion worth of publicly issued dollar-denominated debt coming due this year, according to Dealogic.

The good news is that most emerging market countries and government still have a significant buffer – either in the form of cash or reserves – to weather a relatively brief storm. But what about a protracted one?

To be sure, most bankers and economists the WSJ spoke to believe it’s still too early to say that the tougher lending conditions pose an acute risk for any but the most troubled economies. Issuance in some developing countries has held up well, including parts of Asia. Some of the more prudent companies and countries raised their money at the start of the year, expecting rates to rise, which may have front loaded issuance in 2018, bankers say.

However, as noted above, the risk is what happens should the EM turmoil persist, and with Trump engaging in a lengthy tit-for-tat trade war with China, this appears inevitable, resulting in a bear market in the MSCI Emerging Market stock index and some outright currency crashes, with Turkey’s lira and Argentina’s peso down 41% and 50% respectively against the dollar since the start of the year.

Making matters worse, emerging-market companies are more exposed to the international bond market than they were during the financial crisis, when risk appetite also dried up and emerging markets struggled to raise cash according to Charles Robertson, global chief economist at Renaissance Capital.

That is because banks in developed economies have scaled back syndicated-loan operations outside their home markets, forcing some firms in poorer countries to turn to public bonds instead.

That, and of course, the sheer amount of dollar-denominated debt that emerging markets are currently saddled with.

What happens next? Keep an eye on investor appetite, in some cases in the most obscure of locations. This week, Papua New Guinea hopes to issue a bond that will be a key test of investors’ appetite for risk in emerging markets. If it fails, the pain for emerging markets – increasingly locked out of capital markets – may get much worse before it gets better.

“New Deals Are Being Canceled”: Emerging Markets Increasingly Locked Out From Access To Capital