*BULLARD: `I DON'T THINK' A RECESSION `IS INEVITABLE' 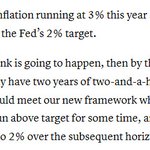 *BULLARD:FED MAY HAVE TO KEEP RATES HIGHER THROUGH '23, INTO '24

It will be without Bullard's votes

New York City has slapped 12 people with civil summonses who it says were not complying with a mandatory measles vaccination order, as the city’s worst outbreak since 1991 rose to 390, according to Wednesday data.

The outbreak began last October and has been largely confined to children living in Brooklyn’s Orthodox Jewish communities. Two of the 61 cases confirmed since last Thursday are pregnant women, according to Reuters, citing the city’s health department.

The Health Department took the unusual step earlier this month of issuing an emergency order requiring unvaccinated people in affected neighborhoods to get the measles, mumps and rubella, or MMR, vaccine unless they could otherwise show they had immunity.

The 12 people issued summons for defying the order must attend a hearing and face a fine of up to $1,000 if found to be noncompliant. –Reuters

NYC’s outbreak is one of the largest of several across the country, which has confirmed 695 measles cases so far this year – the most since the virus was declared eliminated in 2000, according to the US Centers for Disease Control and Prevention in a Wednesday statement.

The resurgence – concentrated primarily in Washington state and New York – is being blamed on the anti-vaccine movement.

“The longer these outbreaks continue, the greater the chance measles will again get a sustained foothold in the United States,” the CDC warned in a statement, which added that outbreaks can spiral out of control in communities which have lower-than-normal vaccination rates.

Although the disease was eliminated from the country in 2000, meaning the virus was no longer continually present year round, outbreaks still happen via travelers coming from countries where measles is still common, the CDC says.

As of Wednesday, the number of measles cases so far this year exceeds the 667 cases reported in all of 2014, which had been the highest annual number recorded since the elimination in 2000. The virus has been recorded in 22 states so far in 2019, the CDC said. –Reuters

Of note, no deaths have been recorded in the current outbreak in the United States. According to Unicef, there are approximately 2,593,000 children in the US who are not vaccinated for measles. Globally, an estimated 110,000 people – mostly children – died of the disease in 2017, a 22% increase over the previous year. The majority of measles cases are in unvaccinated individuals, according to The Telegraph.

US Health Secretary Alex Azar tried to assuage concerns over the vaccine, saying in a statement that its safety “has been firmly established over many years.”

According to US vaccine court data, the National Vaccine Injury Compensation Program (VICP) has paid out over $4 billion since 1989. That said, between Nov. 16 of last year and Feb 15 of 2019, 80% of injury awards were for the flu shot.