TSLA rising by $1BN every 10 seconds

Gartman Says It's Time To Turn Bullish On Bonds https://www.zerohedge.com/markets/gartman-says-its-time-turn-bullish-bonds

Update (1300ET): Italy reported its lowest number of new cases since March on Sunday. Italy counted just 802 new cases and 165 new deaths during the prior day, the lowest numbers since early March. That brought its totals to 219,070 cases and 30,560 deaths.

Daily fatalities fell to 165 — the fewest since March 9 — from 194 on Saturday, with a total of 30,560 reported since the start of the pandemic in late February.

The latest good news comes as Prime Minister Giuseppe Conte prepares to take the next steps toward easing the national lockdown.

Conte, under pressure from coalition allies to speed up the reopening as the country’s curve dramatically flattens, told an Italian newspaper that bars, restaurants and barbers would be allowed to reopen before June 1, the date previously set by the government. Shops are due to reopen on May 18.

Meanwhile, China just reported the first case of the virus in Wuhan since April 3.

Update (1240ET): For the second day in a row, New York has reported the fewest virus-linkeddeaths in a day since March. The number of deaths reported yesterday was 207.

As the number of deaths in New York nursing homes explodes, Cuomo announced a new policy Sunday: All nursing home staff must be tested for COVID-19 twice a week, no exceptions. Any nursing homes who fail to comply will lose their license, Cuomo said. He also revealed that the state is now investigating 85 cases of a mysterious respiratory syndrome affecting children that has appeared both in the UK and in the New York City area. 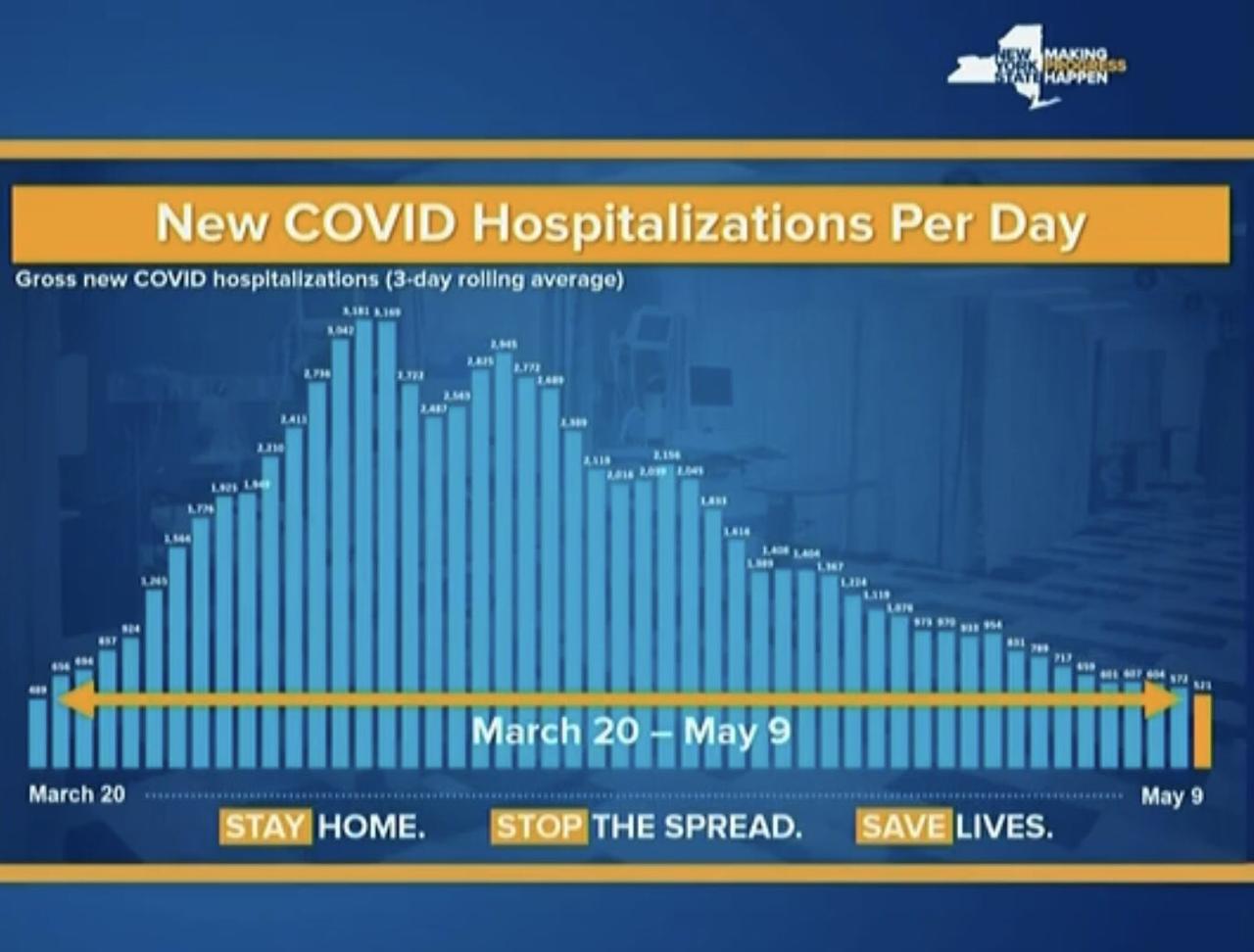 Meanwhile, the NYT reports several cities in Afghanistan ended weeks of lockdown on Sunday, despite the continued spread of the virus, due to the dire economic reality.

The major cities of Mazar e Sharif and Kunduz in the north and Jalalabad and Mehtar Lam in the east were among those that officially ended the lockdown. Other cities such as the capital, Kabul, and Herat technically remained under lockdown, but the police appeared to be no longer enforcing it.

Sunday comes as the number of new cases reported over the weekend has slowed as countries around the world manage to bend their respective curves.

Around the world, the number of new cases reported dropped for the second day in a row, according to data from Johns Hopkins.

However, the number of new cases in Germany accelerated again just days after the federal government loosened restrictions once again, acting in concert with state leaders.

The Robert Koch Institute for disease control said in a daily bulletin released Sunday morning that the number of people each sick person now infects (known as the reproduction rate, or R) has risen to 1.1.

Meanwhile, in the US, the reopening has been going more or less as well as can be expected in Georgia, Texas and the dozens of other states that have already started the process.

Any reading above 1 means the number of new cases is growing, not slowing. And the German government had previously promised to slow down, or even reverse, its reopening policies should ‘R’ linger above 1 for too long.

The institute claimed the number of new coronavirus cases had increased by 667 yesterday, bringing Germany’s total to 169,218, while the daily death toll had risen by 26 to 7,395.

Germany wasn’t the only country to report a slight acceleration in cases Sunday. Iran warned of a resurgence of its own as it reported 51 new deaths. Iran started relaxing virus-related a month ago (around the same time that Turkey surpassed it as the worst outbreak in the Muslim world) and has been reporting steady declines in new cases and deaths ever since.

While Germany considers how to respond to these troubling new data, Spain’s federal government continues to clash with several of the country’s regions over PM Pedro Sanchez’s decision to restrict the scope of the relaxation of its Spain’s extremely harsh 2-month-old lockdown.

On Sunday, as Sánchez held his weekly teleconference with the heads of the country’s regions, several local officials complained about the government’s decision to reject requests by certain, mostly urban, territories (including Madrid but also parts of Valencia and Andalusia).

“It is obvious that Madrid needs to take a step forward,” said Isabel Díaz Ayuso, the head of the region worst hit by the pandemic, citing the capital’s role as the heart of Spain’s economy. As stage one of the reopening begins tomorrow, 51% of Spain will be allowed to gather in groups of up to ten, non-essential shops will be allowed to reopen without appointment, and restaurants and bars may serve people in outside seating.

“It is important to keep everything we’ve gained up to now,” responded María Jesús Montero, government spokeswoman, who said the government’s decision was based on technical criteria.

Meanwhile, Pope Francis on Sunday called on the leaders of the EU to work together to deal with the social and economic consequences of the coronavirus pandemic. The pope noted in his Sunday blessing that 75 years have passed since Europe began the challenging process of reconciliation after World War II. He said the process spurred both European integration and “the long period of stability and peace which we benefit from today.”

In Asia, the Philippines’ health ministry reported 184 new coronavirus cases, taking the Southeast Asian nation’s total reported infections to 10,794, while 15 more deaths related to COVID-19 were recorded, bringing the toll to 719, while 82 patients have recovered to bring total recoveries to 1,924, it said in a bulletin.

In the US, local media reported that at least 75 protestors tested positive for COVID-19 after attending a large rally against the stay-at-home order in Wisconsin.

In the UK, as BoJo prepares to lay out his plan for reopening the British economy, Housing Minister Robert Jenrick said said the economy would restart slowly and cautiously.

“The message … of staying at home now does need to be updated, we need to have a broader message because we want to slowly and cautiously restart the economy and the country,” Jenrick told Sky News.

Jenrick added that easing the lockdown would be conditional on keeping the spread of the virus under control, and if the rate of infection begins to increase in some areas, more stringent measures could be re-introduced. Elsewhere in the UK, a trial of a controversial government test-and-trace app carried out on the Isle of Wight has yielded positive results, much to the chagrin of privacy advocates.

“The trial in the Isle of Wight of that tracking app, the NHSX app designed to help assist people, is going well. People have been downloading it enthusiastically and I know that the plan is later in the month to make it more widely available as well,” a local official told the FT.

In Turkey, which is – as we mentioned above – the worst-hit country in the Muslim world by number of infections, senior citizens have been allowed to leave their homes for the first time in seven weeks Sunday under relaxed coronavirus restrictions. Those aged 65 and over, deemed most at risk from the virus, had been subjected to a curfew since March 21, but they were permitted outside Sunday for four hours as part of a rolling program of reduced controls being pushed by Ankara.