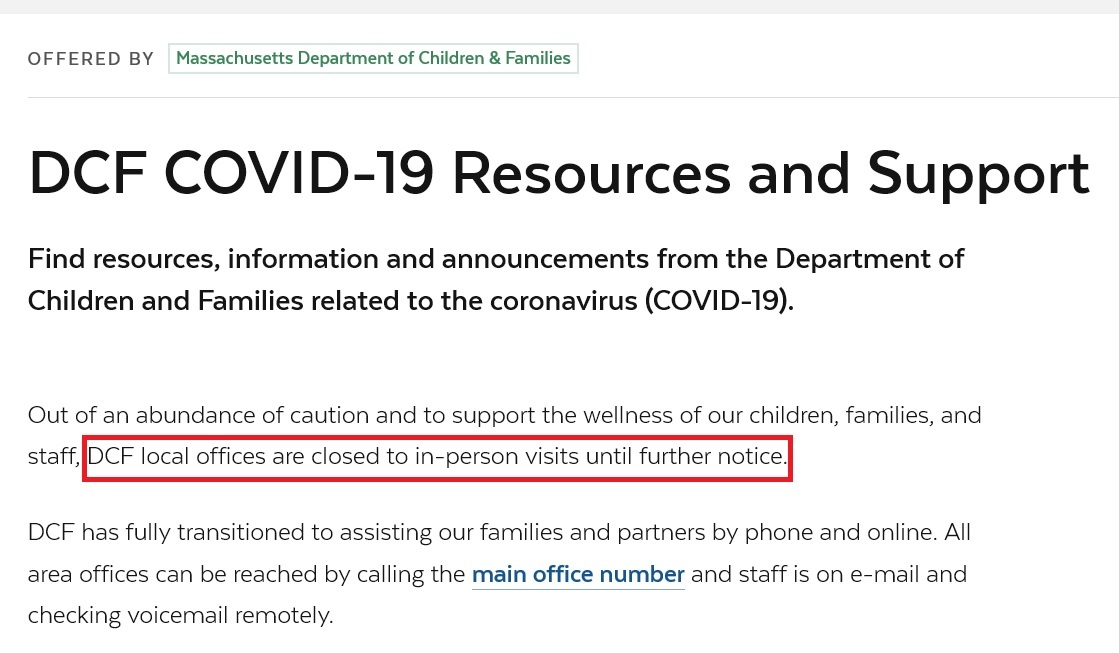 All across the nation parents have been cut off from their children who are in Foster Care, due to the State reactions to the Plandemic.

This is a very serious issue, since study after study has proven throughout the years that children are in far more danger in Foster Care than they are in their homes with their parents, even when that is a “troubled home.”

The Foster Care system is the #1 pipeline for child sex trafficking, for example, and far more child sex abuse happens in Foster Care, than it does anywhere else.

Foster Care Continues to be Child Sex Trafficking Pipeline in 2020 – How Do We Stop It?

Parents in Boston have decided to take action, and are suing Massachusetts Governor Charlie Baker, Marylou Sudders, the Secretary of the Executive Office of Health and Human Services, and Linda Spears, the Commissioner of the Massachusetts Department of Children and Families, for refusing them to have access to their children and the ability to be reunified with them.

According to the Complaint:

This complaint is brought by families in the foster care system who are losing time together – time that they will never get back – due to a recently imposed Department of Children and Families (department) policy terminating visitation.

In March 2020, in response to risks presented by the COVID-19 pandemic, the department ended visitation for most children in its custody and their parents. This near-total prohibition on visitation causes severe harm to children because it is unnecessarily delaying families’ reunification, is unwarranted under prevailing public health guidelines, and violates the law.

According to the suit, one plaintiff — an unnamed mother of a 3-month-old — has not been physically present with the baby since March 9.

“It’s been very difficult for bonding to occur over video,” the suit says. It adds that the mother has been engaged in a “family action plan,” and that “the goal is for the baby to be reunified” with the mother.

Lauren Russell, an attorney with the Committee for Public Counsel Services, the state’s public defender office, is representing the families.

“Visitation means in-person contact,” according to the complaint filed by Lauren Russell, an attorney with the Committee for Public Counsel Services, the state’s public defender office, which is representing the plaintiffs.

By providing only “video conference visitation,” it mounts to a termination of visitation, which requires a court order, according to the complaint, and is “unnecessarily delaying families’ reunification, is unwarranted under prevailing public health guidelines, and violates the law.”

For one Westport father and his 1½-year-old daughter, their twice weekly video chats may only last 10 minutes before the toddler’s attention to the call begins to wane, the complaint states.

A Taunton father, whose 3-year-old daughter is in foster care, had been granted two hours of visitation time a week, and DCF “intended” to return her to his custody this spring, according to the complaint. But he hasn’t since her in person since March 5, and their time together has been reduced to one-hour “virtual contact” each week.

When a Pittsfield father sought to restart visits with his 10-year-old son and 12-year-old daughter, a DCF attorney said the department was not “providing in-person visitation at this time,” according to the lawsuit — suggesting there was a broader prohibition beyond what Spears had initially indicated.

“I do not know when in-person visits will resume,” the attorney wrote, according to the complaint.

As part of their lawsuit, the plaintiffs included a letter that federal health officials released in March. It said the federal Children’s Bureau “discourages the issuance of blanket orders that are not specific to each child and family.” (Source.)

Technology is the New Mechanism of Inequality

Elizabeth Brico, writing for the publication Prism, documents how poor minority families are suffering the most during the current family visitation restrictions happening nationwide due to the Plandemic response, as contact is only allowed digitally, making it more difficult for those with limited technology access.

On the morning of May 14, advocates and supporters from around the country dialed into a virtual hearing taking place in Illinois. The argument was over a blanket decision made by the state department of human services banning in-person supervised visitation between parents and children in foster care.

Many of these spectators were watching from outside Illinois, having no direct ties to the plaintiffs or the state. Although the findings from this hearing only directly impact Illinois, the issue at hand is one that affects parents with child welfare involvement across the United States.

It is an issue that is causing separated families immense, ongoing strife, and has the potential to inflict irreparable long-term damage to parents’ cases. It is also spotlighting and deepening the racial, ethnic, and class divides that have long plagued the U.S. child welfare system.

Child welfare agencies are mostly governed at state and jurisdictional levels, which means there’s room for variance between the ways in which states and counties respond to the pandemic. But in the face of COVID-19, agencies around the nation have made decisions similar to the contested Illinois ban.

Many states, such as Idaho, Connecticut, Nevada, and others have cut-off in-person supervised visitations altogether. Others, like New York and California, are making decisions on a case-by-case basis, though anecdotal reports from these states show decisions that are heavily weighted against in-person visits.

Some, such as Louisiana, continue to allow in-person supervised visits on the books, but no longer have means to facilitate them after shifting to remote operations.

Eliana, a New York City mother who asked that her real name not be used in this story, described her tele-visits with her 19-month-old toddler as “really hard” and expressed particular confusion over the fact that her child continues to see an out-of-home babysitter and attend daycare three times a week, but can no longer visit with her in-person.

“I try to do what I can—put on puppet shows, read books to her, sing songs, try to get her to laugh—but any little distraction gets her eyes off that screen. If the foster mother walks through, she sees her and starts crying and wants to be picked up,” says Eliana about the remote visits, which often cannot go on for the full hour she’s allotted due to her toddler’s limited attention span.

For other families, the situation is worsened by lack of access to the technology needed to conduct remote visits, whether that’s video-enabled devices, a strong internet connection, or a data or phone minute plan that can handle frequent, long calls. It is a burden shouldered solely by poor families, and disproportionately by families of color.

Compounding this, Native American, Black, and Latinx families are also overrepresented in the child welfare system. The intersection of these two sets of disparities during the COVID-19 pandemic is creating a perfect storm of inequities that is driving poor families of color even further apart, and making the path to reunification much more difficult.

“[Technology] is the new mechanism of inequality,” says Blanca Gordo, who previously worked as senior researcher of artificial intelligence at the International Computer Science Institute and is a department member of the Institute for the Study of Societal Issues at the University of California-Berkeley.

She argues that the integration of technology into virtually all essential operations, without concurrently making that technology affordable and available to all, has deepened historical inequities. (Read the full article.)

If you have not yet read my article on who is really behind all of these planned events happening in our society today to usher in a “New World Order,” you need to read it to understand what and why all of this is happening today, especially if you are a parent with young children. Because this very real enemy wants your children, and the plans for the New World Order include eliminating parenthood and replacing the State as the parent.

23
Anarcho-Capitalism
liberty aggregatorOctober 3, 2021 at 4:55 am.
MedicalKidnap.com