Earlier this month, the Philadelphia Fed released a report called “Central Bank Digital Currency: Central Banking for All?” that sought to look at the idea of an account-based central bank digital currency (CBDC). Ultimately, it concluded that introducing a digital currency could wind up endangering traditional commercial banking. 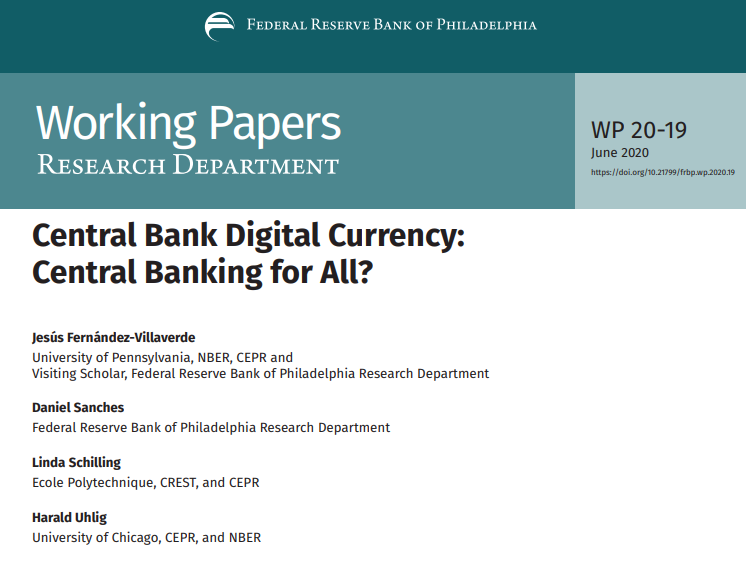 “The introduction of digital currencies may justify a fundamental shift in the architecture of a financial system, a central bank ‘open to all,’” the paper opens by saying.

Among the questions raised was the idea of whether a CBDC could allow individuals to have a direct account with a central bank, replacing the role of traditional commercial banks.

The paper sought to understand if a CBDC could be used to prevent panics or bank runs that are cause from the typical “maturity transformation” banking practice in use by current financial institutions. The report concludes that this way of banking remains more susceptible to bank runs and money markets drying up due to lower short-term loan liquidity.

The introduction of a central bank digital currency (CBDC) allows the central bank to engage in large-scale intermediation by competing with private financial intermediaries for deposits. Yet, since a central bank is not an investment expert, it cannot invest in long-term projects itself, but relies on investment banks to do so. We derive an equivalence result that shows that absent a banking panic, the set of allocations achieved with private financial intermediation will also be achieved with a CBDC.

At the same time, the paper acknowledges the likelihood of doing damage to traditional banking systems by introducing a CBDC to try and alleviate these issues, as it would reduce competition between commercial banks.

“Our equivalence result has a sinister counterpart. If the competition from commercial banks is impaired (for example, through some fiscal subsidization of central bank deposits), the central bank has to be careful in its choices to avoid creating havoc with maturity transformation,” the paper reads.

CBDC’s, if used to allow the borrowing of more money than is lent out, could harm money markets, the report says.

And the paper concludes that the Fed already mostly prevents runs on the bank with its contracts with banks. Further, it found that the central bank would likely deter deposits away from commercial banks.

“During a panic, however, we show that the rigidity of the central bank’s contract with the investment banks has the capacity to deter runs. Thus, the central bank is more stable than the commercial banking sector,” the report says.

“Depositors internalize this feature ex-ante, and the central bank arises as a deposit monopolist, attracting all deposits away from the commercial banking sector. This monopoly power eliminates the forces that induce the central bank from delivering the socially optimal amount of maturity transformation,” the report concludes.

Crypto experts disagree. Marshall Hayner, the CEO and co-founder of cryptocurrency firm Metal, told Cointelegraph: “I don’t believe CBDC endangers retail banks, I find it highly probable they [CBDC] will become an integral part of the US banking system, and part of the existing regulatory structure, as the [Office of the Comptroller of the Currency] recently called on public comments on the topic of updating its rules on digital activities.”

“As cash rapidly declines, the need for a digital alternative for the modern banks and fintech platforms has emerged. From fostering trust in monetary authorities, to creating competitive payment systems and enhancing money laundering enforcement, we are seeing the beginning of the global digital dollar,” he concluded.