Trevor Milton's Fortune Falls By $1 Billion After Stepping Down As Nikola Chair https://www.zerohedge.com/markets/trevor-miltons-fortune-falls-1-billion-after-stepping-down-nikola-chair

Why Is The Mainstream Media Suddenly Signaling That A Much Larger Stock Market Decline Is Coming? https://www.zerohedge.com/markets/why-mainstream-media-suddenly-signaling-much-larger-stock-market-decline-coming

Police Officer Who “Threw Herself From Her Horse” Has Collapsed Lung, Broken Collarbone, Shattered Ribs

A police officer in London has suffered serious injuries after her horse bolted when black lives matter protesters started throwing bikes and other projectiles toward the animal. Nevertheless, the media and leftists have claimed that the officer ‘knocked herself’ from the horse. 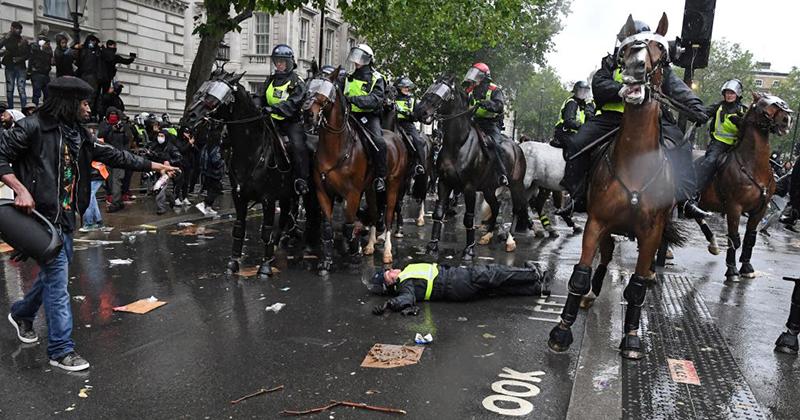 Video of the incident in Central London this past weekend shows the horse becoming agitated, and the officer trying to control the animal, but failing as it runs the officer straight into a traffic light, violently throwing her off and knocking her unconscious.

Police being attacked again. Second time this week. Why was this allowed to happen? pic.twitter.com/zs7YjaxN6J

Why are leftists so insistent on attacking animals? https://t.co/DxQbiZf7cH

Antifa attempted to attack a police horse in London. It did not go well pic.twitter.com/UELn8ycvLj

This photo shows a ‘protester’ deliberately shoving a bike at the horses:

The police may well be investigating before they put out an official statement. But journalists and eyewitnesses on the scene are more forthright.

For example, here’s a ‘protester’ pushing a bike at a police horse. A police investigation may well conclude the same. pic.twitter.com/zOaME0WNeW

Here the projectiles and bikes can be seen scattered all over the ground:

Despite it being obvious what caused the animal to become spooked, the BBC reported that “the officer knocked herself off her horse”, while showing a poor angle of the incident, and only the aftermath:

“The officer knocked herself off her horse.” BBC.

This is like saying George Floyd kneeled on his own head.pic.twitter.com/lbKOIm2ceg

On their website, the BBC merely noted that the horse bolted, not that rioters were pelting it with projectiles:

“A police horse has bolted.”

What caused this to happen, BBC?

Would have thought that would have been an important detail. https://t.co/X8e1MgVkcV

It was a common thread in the state broadcaster’s coverage of the entire weekend, as it claimed protesters were ‘largely peaceful’ despite multiple incidents of violence and full on attacks on police.

Titanic sinks after striking an iceberg during largely peaceful travel over the North Atlantic Ocean https://t.co/L1FdKgTKF5

The horse made it’s own way home (‘screw you guys, I’m going home’):

The horse, uninjured, made its own way back to the stables, nearby.

However, the officer is severely injured, with a collapsed lung, broken collarbone and shattered ribs, according to reports.

The Metropolitan Police Federation said that the officer is still receiving treatment in hospital, and is likely to be off duty for four months while she recovers.

Leftists attempted to argue that the entire incident was the police officer’s own fault, despite clear images and video of thugs pelting the horse. They were led by virulent socialist virtue signaller Owen Jones:

You’re wrong a lot but you’re not *this* stupid. Are you seriously suggesting that it was the trained officer’s own fault that their horse bolted and sent her flying through the air? Don’t you reckon the thugs throwing bricks and bikes played a pretty large part in that?! https://t.co/DKmQtJSUZq

Owen Jones is a hideous person, no surprise by the shit that comes out of his mouth. He is only to eager to blame the police for it, wait till he needs to ring people for help, hopefully the police won’t bother. https://t.co/wy43ht8epk

He even called for horses to be banned:

Owen Jones is gunning for horses. Of course he is – horses were *definitely* the problem today. If it hadn’t been for those pesky horses, everything would have been fine! pic.twitter.com/Av6GgyoYI4

Give it 24 hours and Owen will claim the war memorials were defaced by the horses.
“LET’S BAN HORSES FROM PROTESTS!”

It’s outrageous that a police horse got in the way of a dangerous projectile. If the horse hadn’t been there, the projectile wouldn’t have hit it.
Love from Owen Jones and Ash Sarkar.

A Guardian ‘journalist’ called for a funny meme to be made out of the footage of the officer being seriously injured:

This is @guardian writer Hannah Jane Parkinson @ladyhaja asking for a parody to be made of the exact moment when a police officer was seriously injured during yesterdays protest in London.

If the @guardian do not fire her, they must approve of her actions and are complicit. pic.twitter.com/egasGPXU1B

These people are truly sick.

Police Officer Who “Threw Herself From Her Horse” Has Collapsed Lung, Broken Collarbone, Shattered Ribs