This both explains a lot -- and corrects widespread misreporting and claims in media.
(READ) CDC: 74% who got Covid-19 and most who were hospitalized in recent analysis had been fully vaccinated. https://sharylattkisson.com/2021/07/read-cdc-74-who-got-covid-19-in-a-recent-analysis-had-been-fully-vaccinated/

(READ) CDC: 74% who got Covid-19 in a recent analysis had been fully vaccinated. https://sharylattkisson.com/2021/07/read-cdc-74-who-got-covid-19-in-a-recent-analysis-had-been-fully-vaccinated/

Tune in as the Vice President and I meet with Governors to discuss the worsening wildfire season and our work to strengthen wildfire prevention, preparedness, and response efforts. https://twitter.com/i/broadcasts/1zqKVXPAvNDJB

That's ok. It depends on who you are. 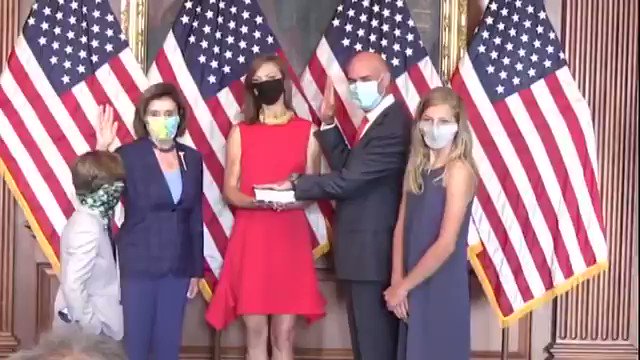 Nancy Pelosi takes off mask, breaking her own mandate, for a photo.

POLL: Most Americans believe US govt. spies on journalists

The following is from Rasmussen Reports

Voters strongly believe journalists and political opponents are targets of spying by the U.S. government, and they don’t trust the judgment of the feds when they do it.

A new Rasmussen Reports national telephone and online survey finds that 61% of Likely U.S. Voters think it’s at least somewhat likely that the U.S. government spies on critical journalists and political opponents, but 24% think it’s unlikely. This includes 30% who think it’s Very Likely the government spies on these groups and six percent (6%) who think it’s Not At All Likely. Another 14% are undecided. (To see survey question wording, click here.)

Does the U.S. government spy on critical journalists and political opponents?

Note: Sharyl Attkisson is currently suing the Justice Department and FBI for the government intrusions into her work and personal computers as far back as 2011 while she conducted investigative reporting for CBS News.

POLL: Most Americans believe US govt. spies on journalists