A tally of who carries guns in public adds to our knowledge, and has a few surprises:

* 4% of all adults in America carry daily
* 30% of all handgun owners carry once or more a month
* Nine times as many people carry daily than there are on-duty police.

Large scale study of who carries guns in public provides some solid numbers and a few surprises.

Important then is the “School Shooting Database” hosted by the Federal Government as part of the Department of Homeland Defense. The phrase “school shooting” creates in the mind of the reader some very specific notions. For the average American, it means mass homicide events like Parkland, Sandy Hook and Columbine. It does not mean a stray bullet from a inter-gang confrontation two blocks away at two in the morning.

Per the project’s web site, “The K-12 School Shooting Database research project is a widely inclusive database that documents each and every instance a gun is brandished, is fired, or a bullet hits school property for any reason, regardless of the number of victims, time, day of the week, or reason.” (emphasis ours)

This will take some unpacking.

First, let’s note the alleged cause behind the project – the better understand a form of threat on public school children – is an honorable one. We all want to make sure kids do not face fatal situations. But two problems immediately present themselves:

AMALGAMATION: By capturing a broad array of situations – ranging from off hours adult suicides, to gang activity, to actual campus shootings – the project creates misleading summaries ripe for exploitation by those who lie for a living. Indeed, the propagandists at The Trace jumped on the headline numbers without a wit of analysis to separate the sundry rows of data (such rigors would be a poor use of Michael Bloomberg’s money as it might expose a truth).

HEADLINE ABUSE: Reporters (as opposed to journalists) will be quite willing to echo such inaccurate headline numbers, for reporters don’t have the time or statistical chops to download the database (it is publicly available, for which I give the maintainers brownie points) and perform even simplistic sorting, pivot tables, and subsequent analysis.

The next effect is that this database will be misused, abused, miscited, misquoted, and generally buggered in order to advance political agendas. Indeed, if you do little more than read this post, contact your congress critter and ask them to have the project renamed so as to reduce media confusion (seriously, “School Shooting Database” is exactly the wrong name).

A good first look at the data would be to see if Dick and Jane are sitting ducks while in the care of your county school board.

“Circumstances” are a well-known problem in criminology data quality. The FBI’s Uniform Crime Reporting (UCR) system shows “arguments” as being the leading knowable cause of firearm homicides. But any metro-area detective will tell you the many, perhaps most of inner-city homicide “arguments” were likely gang disputes, but rules require them to log the event as an argument if shouting was heard, but nobody was certain about the nature of the argument.

As the “school shooting” database shows, most incidents were due to the escalation of a dispute (similar to “arguments” in UCR parlance), followed by gang involvement. How many of the escalated disputes were over inter-gang conflicts is not knowable from this database, but the ratio is likely large.

Digging a bit more, we discover that a full 30% of all entries in the database do not conform to the public perception of a “school shooting”. When we define this as (a) being on campus or on a school bus and (b) during school hours, nearly a third of the incidents become disqualified. Now, they may still have a bearing on child protection. A school in a tough neighborhood where kids get shot on the sidewalk outside during the day is a problem. But that same school and location at o-dark-thirty is a different matter.

This actually matters a lot. The most frequent outdoor “school shootings” are gang-related, and quite likely escalations involving inter-gang conflicts. Outdoors, the rate of these two categories is 38-111% higher than on campus and during school hours. Hence, any analysis using this database has to separate the two, otherwise you are mixing significantly dissimilar cause+location+time elements.

Skipping past gang related issues, we find the most common on campus and during school hours incidents to be from suicides and accidents. Other criminology reviews of kids carrying guns onto school yards shows that many or most do so for self-protection, and that is largely within inner-cities and a reaction to gang violence. With accidental shootings topping the list of on campus and during school hours shootings, we can safely assume that the rate of accidental shootings would decline if the threat of gang violence dropped first (e.g., fewer kids would take a gun to school for self-protection, and thus cause an accident with it).

Another wrinkle is when on campus school hour shootings occur. Since most such events occur in high schools, it helps to look at population scaled incidents by state. Our old friend Washington D.C. tops the charts (by a huge margin) for both the total number of shootings but also for gang related shootings. 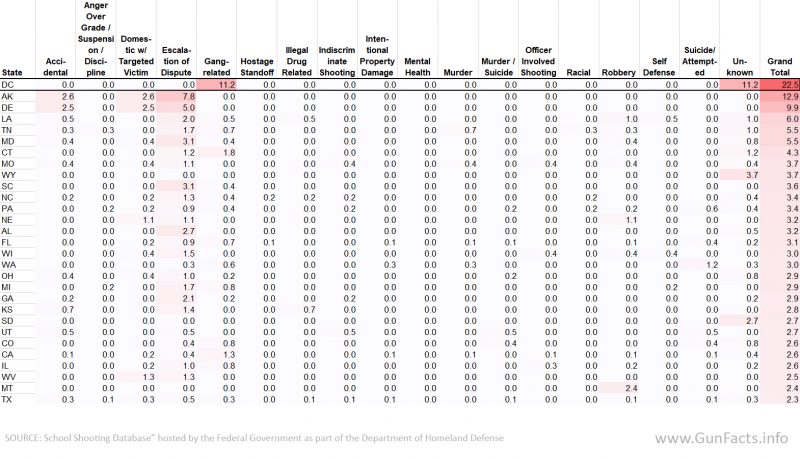 This database will be useful, but not in the hands of agitprop groups or any garden variety reporter suffering from innumeracy.  When someone cites the Department of Homeland Defense’s School Shooting Database, immediately ask the person: