Biden going for 12 of 14 weeks red, another historic first 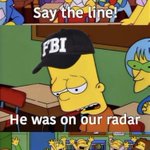 Six weeks after Trump told a crowd of U.S. Marines at Miramar Air Station in San Diego of a proposal to expand the military’s reach into space – the President is at it again; teasing the idea of a space force to a White House crowd on Tuesday.

Trump made the comments while presenting the Commander-in-Chief’s Trophy to the Army football team for its victory over both the Navy and Air Force last year.

Trump to the Army football team: “You will be part of the 5 proud branches of the U.S. armed forces — Army, Navy, Marines, Air Force & the Coast Guard. We’re actually thinking of a 6th — the Space Force. Does that make sense?…. We’re getting very big in space.” pic.twitter.com/cZNgJeX1F1

A few of those in attendance standing behind Trump seemed to have issues taking the idea seriously:

The looks on the faces of these Army football players when Donald Trump starts talking about the “Space Force” again have me dying 😂☠ pic.twitter.com/bhese16qds

“My new national strategy for space recognizes that space is a war-fighting domain, just like the land, air, and sea. We may even have a space force,” Trump revealed.

“We have the air force. We will have a space force. We have the Army, Navy. I was saying at the other day because we are doing a tremendous amount of work in space. I said maybe we need a new force. We’ll call it the space force, and I was not really serious and that I thought what a great idea, maybe we’ll have to do that. That could happen. That could be the big breaking story,” said Trump.

Did someone say Space Force? pic.twitter.com/I5S5z9qmgM

Proponents and critics have debated the merit of a dedicated “Space Corps” for decades, which would take over the Air Force’s current operations in space – with some pointing out that the United States has been a party to an international treaty that limits military activities in space since 1967.

Say what? Trump said we are creating a 6th branch.. “Space Force”..
Dude, there is a treaty out there. OUTER SPACE TREATY: 105 sovereign countries signed it and 20+ are in the process of completing ratification..
DUDE, ask questions first.. or GOOGLE! pic.twitter.com/ushHuvnqQO

The Outer Space Treaty restricts states from testing any weapons in outer space, as well as the establishment of military bases on the moon or other celestial bodies. The orbital deployment of weapons of mass destruction is also expressly prohibited.

Who else is building infrastructure in space?
1. Russia
2. China

Who are our biggest geopolitical threats?
1. Russia
2. China

But Space Force is an idiotic idea because Trump said it. Right? pic.twitter.com/UkG9kLVnY5

You are entering another dimension.
Welcome to The Space Force.