Where is walter white?

The (fundamental) bull case: either earnings go up or real rates have to go negative 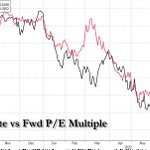 Stock Buybacks Hit Record $680 Billion In The First Half

At the start of the year, when the impact of Trump’s offshore cash repatriation holiday was just being felt, JPMorgan made a daring forecast: it predicted that buybacks in 2018 would hit a record $842 billion, a number that would put any prior year’s total to shame. It also meant that as corporations themselves emerged as the biggest buyer of stocks in 2018, it would require an avalanche of selling to push the market lower.

More recently, when looking at its client trading activity, Bank of America made another surprising observation: in the first half, corporations were the only net buyers of stocks (with the only exception of companies in the Industrial sector), as institutions and hedge funds have been net sellers throughout 2018.

And while we were originally skeptical that JPMorgan’s forecast would be validated, the latest official data blown all our skepticism out of the water.

According to TrimTabs, Stock Buyback Announcements swelled to a record $436.6 Billion in the second quarter, smashing the previous record of $242.1 billion set just one quarter earlier, in Q1. Combined, this brings the first half total at a ridiculous $680 billion, or just $160 billion less than JPM’s full year forecast. Annualized, this number amounts to  $1.35 trillion, an absolutely staggering number.

Putting the Q2 number in context, TrimTabs writes that “the amount of money committed to buybacks last quarter could fund 6.8 million $1,000 bonus checks to workers every single trading day.”

Apple announced a $100 billion buyback on May 1, the largest repurchase ever by a U.S. public company.  In addition, 19 financial companies announced a total of $112.2 billion in buybacks after the release of the Federal Reserve’s latest “stress test,” led by too-big-to-fails Wells Fargo ($24.5 billion), J.P. Morgan ($20.7 billion), Bank of America ($20.6 billion), and Citigroup ($17.6 billion).  Sixty-three companies announced buybacks of at least $1 billion last quarter.

Furthermore, this historic spending spree on share buybacks has some analysts worried companies are buying their shares at excessive valuations during the peak of the economic cycle and at a time when the market rally is nine years old, but to executives who get to reap the immediate benefits of these buybacks, often by selling into them, none of this matters.

Next TrimTabs echoes what two Harvard professors recently wrote was the “real problem with stock buybacks”, namely how they systematically transfer wealth from shareholders to executives, and writes that “corporate America’s actions suggest that most of the benefits of the corporate tax cut will flow to investors in general and top corporate executives in particular.  Most top executives have large stock-based compensation packages, and stock buybacks use shareholders’ money to prop up stock prices.“

That much has been known for years, and yet Congress refuses to step in and end this systematic looting because it is largely on the back of corporate creditors who have no choice but to fund these buybacks in exchange for a modest yield. And so this charade will continue until companies run out of cash with which to repurchase their own stock, making executives even richer, or the bond market finally say no more to debt-funded buybacks.

Meanwhile, in a curious twist, a recent FactSet analysis found something unexpected: even as U.S. companies are buying back record amounts of stock this year, their shares aren’t getting the boost they bargained for.

57% of the more than 350 companies in the S&P 500 that bought back shares so far this year are trailing the index’s 3.2% increase.  The S&P 500 Buyback index, which tracks the share performance of the 100 biggest stock repurchasers, has gained just 1.3% this year, well underperforming the S&P 500.

That is the highest percentage of companies to fall short of the benchmark’s gain since the onset of the financial crisis in 2008, according to a Wall Street Journal analysis of share buyback and performance data from FactSet .

“There has been less of a reward for companies engaging in new buybacks over the last 18 months,” said Kate Moore, chief equity strategist and a managing director at asset-management firm BlackRock Inc. “It’s fair for investors to ask whether companies are buying at the right point.”

Oracle has been one of the biggest buyers of its own stock in recent years and spent $11.8 billion on stock repurchases last year, when shares gained nearly 23%. But that gamble hasn’t looked smart this year as the networking-device maker has struggled alongside the broader market, pulling its shares down 6%.

Others like McDonald’s Corp. , Bank of America and JPMorgan Chase have spent billions on share repurchases this year, but haven’t seen a short-term bounce in share prices. McDonald’s bought back $1.6 billion of shares in the first quarter, but the fast-food chain’s stock is down 7.4% this year. Bank of America and JPMorgan Chase have both spent more than $4.5 billion to buy back their shares, which are down 5% and 2.7%, respectively.

From a purely financial point, companies in the S&P 500 that have repurchased shares are expected to see a return on investment of about 6.4% this year, a percentage that falls below the past six rolling five-year periods as measured by Fortuna Advisors, a financial consulting firm that has examined buyback trends going back to 2007.

CEOs, CFOs and Treasurers know all of this, of course, but to them the real goal is simpler: to cash out as soon as possible, while using the company’s balance sheet to soak up any insider sales. If the stock goes up in the process, so much the better.

Gregory Milano, Fortuna’s CEO, summarized it best:  “The majority of capital deployed is going right back to shareholders and not reinvestment in businesses. If that’s the only thing you’re relying on, it’s going to end badly.”

Of course it will, but as we approach an absolutely ridiculous $1 trillion in buybacks – actually the annualized first half buyback total of $678 billion would imply over $1.35 trillion in 2018 buybacks – at least it will end with a bang.

Stock Buybacks Hit Record $680 Billion In The First Half