There Is Now A Dogecoin Billionaire Worth $15BN https://www.zerohedge.com/markets/there-now-dogegoin-billionaire-worth-15bn

‘Stuck In The Middle’ As Seasonal Sell Signals Trigger

Stuck In The Middle

Currently, we seem to be stuck in the middle even as seasonal sell signals trigger. It reminds me of the lyrics of one of the classics.

“Trying to make some sense of it all,
But I can see that it makes no sense at all,
Is it cool to go to sleep on the floor,
‘Cause I don’t think that I can take any more
Clowns to the left of me, jokers to the right,
Here I am, stuck in the middle with you”

It’s a fascinating dichotomy in the markets currently. As noted last week:

“There is currently a “Great Divide” happening between the near “depressionary” economy versus a surging bull market in equities. Given the relationship between the two, they both can’t be right.”

This week, the continuation of depressionary economic data continued: 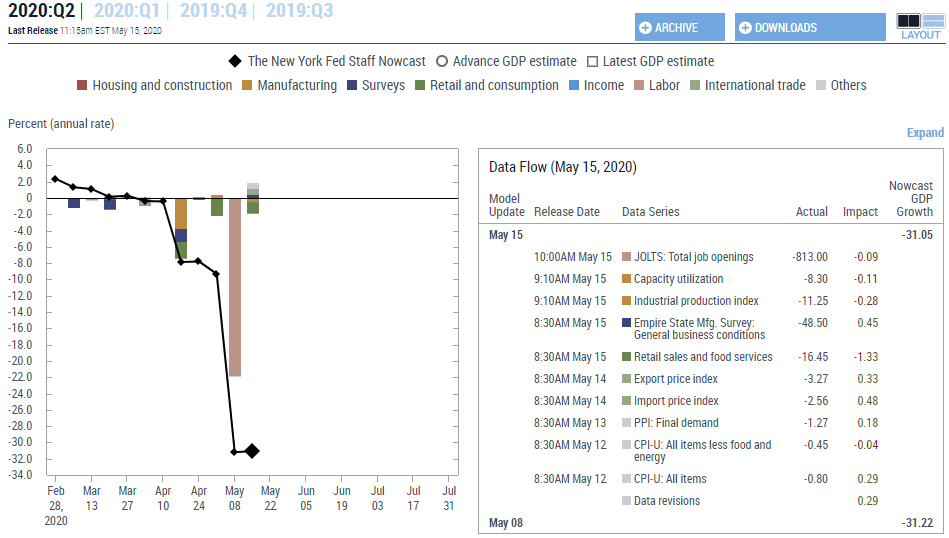 These numbers are mentally hard to grasp. Yet, the markets remain range-bound between the 50% and 61.8% retracement levels, consolidating the advance from the March 23rd lows.

The reason for the dichotomy is simple.

The bullish argument for stocks remains simple. As long as the Federal Reserve is pumping in liquidity, buy stocks.

As investors, however, we need to be paying attention to earnings. There is a simplistic correlation between the economy and the markets. As I questioned in “The Stock Market Is Not The Economy?”

“The relationship becomes more evident when looking at the annual change in stock prices relative to the yearly change in GDP.”

“Again, since stock prices are driven in part by the ‘psychology’ of market participants, there can be periods where markets become detached from fundamentals. However, there is no point in previous history, where the fundamentals catch up with stock prices.”

As stated, the equation is simplistic:

Based on the current economic devastation, earnings estimates for the next couple of quarters have fallen sharply. Unfortunately, they still have not compensated for the coming drop in revenues.

How do I know that?

“PCE depends on jobs and wages as well as an intact supply chain, neither of which are in good condition. Regarding unemployment, the U6 rate, which is a more reliable indicator of job market health, is at 22.8% currently and rising while the labor market participation rate has dropped to about 60%.  These factors do not bode well for growth and earnings for most companies.” – A Brinkley, Jr.

His statement is correct. There is a precise correlation between PCE and GDP. Not surprisingly, if consumption contracts due to high levels of unemployment, then economic growth declines. (PCE is 70% of GDP)

The other problem is investors remain overly optimistic about the recovery prospects for earnings going into 2021. As shown, in April 2019, it was estimated the S&P 500 would earn $174/share (reported earnings) at the end of 2020. Today, estimates for Q4-2021 now reside at just $147/share. This is a 15% contraction in estimates when we are discussing a 30-40% decline in GDP.

With expectations for the S&P 500 to return to all-time highs in 2021, such would mean that valuations currently paid by investors remain at historically high levels.

While it seems these concerns are irrelevant due to the Federal Reserve’s ongoing liquidity injections, fundamentals and valuations always matter over time.

We have talked before about the “narrowness” of the market. Since the March 23rd lows, the “bull market” advance was three different “bull markets.” The three charts below break out the sectors of the market down into “bull market” groupings. I have recalibrated each sector to a $50 starting price in January of this year.

The “Struggling Bull” market has been in sectors that we currently maintain no exposure to in portfolios. These are the sectors most exposed to either the “Coronavirus” impact, or the Fed’s monetary liquidity and zero interest rates.

Industrial and Transportation stocks are most affected by the economic shutdown, while Financials are impacted by reductions of net interest income from zero interest rates, and rising delinquency rates. All three sectors remain below $40, and only marginally above the March 23rd lows.

The next group we classify as a “Stuttering Bull” as the recovery has been better, but the sectors continue to underperform overall. These sectors have been primarily range-bound between $40 and $45/share since coming off their $30 lows.

These sectors are still susceptible to the impacts of the “economic shutdown” from reduced revenues, bankruptcies, unemployment risks, etc.

The last grouping are the sectors we remain most heavily weighted in. These are the companies that are “deemed” to be the most protected from the impacts of the “economic shutdown.” These sectors did not decline as much as the others during the selloff, and now all trade above $45/share.

The sectors are in a “Raging Bull” market and are within striking distance of all-time highs.

Most importantly, while the advance has been notable, participation has not only remained weak but continues to weaken during this consolidation.

With the MACD “seasonal sell” triggered, it may be time to turn a bit more cautious for the summer.

As I discussed with our RIA PRO subscribers (30-day RISK FREE Trial) the “Sell In May” strategy might be worth paying attention to this year. To wit:

“While not every ‘summer period’ is negative, the long-term history of investing during the summer months is not stellar.”

“However, the adage ‘Sell in May’ may be more appropriate this year given the state of the actual economy, earnings risk, and a potential revaluation of markets. The odds of a weak summer period have risen markedly.”

With the “seasonal sell” signal now firmly entrenched, the markets overbought on many levels, and participation remaining weak, the “risk” of having aggressive equity exposures has risen.

While the market can undoubtedly resolve stretched conditions by grinding sideways, such won’t fix the issues of participation and momentum.

‘Stuck In The Middle’ As Seasonal Sell Signals Trigger