"Government attorneys unsuccessfully argued that background checks would not have “deterred” Kelley from buying weapons because his “determination was such that he would utilize any means necessary to commit the mass shooting.”

“He had a suppressor? That’s unique.”

Fact is, they are not used in crimes much at all, which makes the desire of some politicos to ban suppressors an amusing example of uninformed policy pontification.

What the BATF Tracked

We used 2016 for this review of suppressors for the reason that it is recent, we could get other crime data easily, and it skipped 2017 when there was a mass BATF trace of suppressors recovered in one state, which was a very atypical blip on the trend lines.

WARNINGS: Before going further, we need to note that comparing instances where the BATF traced the origin of a weapon – including suppressors – against crime data is a loose fit. The BATF often traces weapons not used in crimes, which makes for an imperfect match. However, for the sake of ballpark perspective, it is “good enough.”

According to the BATF, there were just shy of a million suppressors in circulation in the United States… that they know of. No doubt a few hobbyists or enterprising criminals have made their own, but the expertise, tooling, machinery and such needed to make a suppressor is more than either the typical hobbyist or criminal has time or inclination for.

Of the 902,805 suppressors in private hands in 2016, 97 were traced by the BATF. Keep in mind that some/many/all of these may not have been used in a crime – they may have been recovered under other circumstances (“Well, eccentric old Uncle Wally had a couple of licensed suppressors in his collection when the heart attack came… the BATF wanted to be sure, so they traced them”). 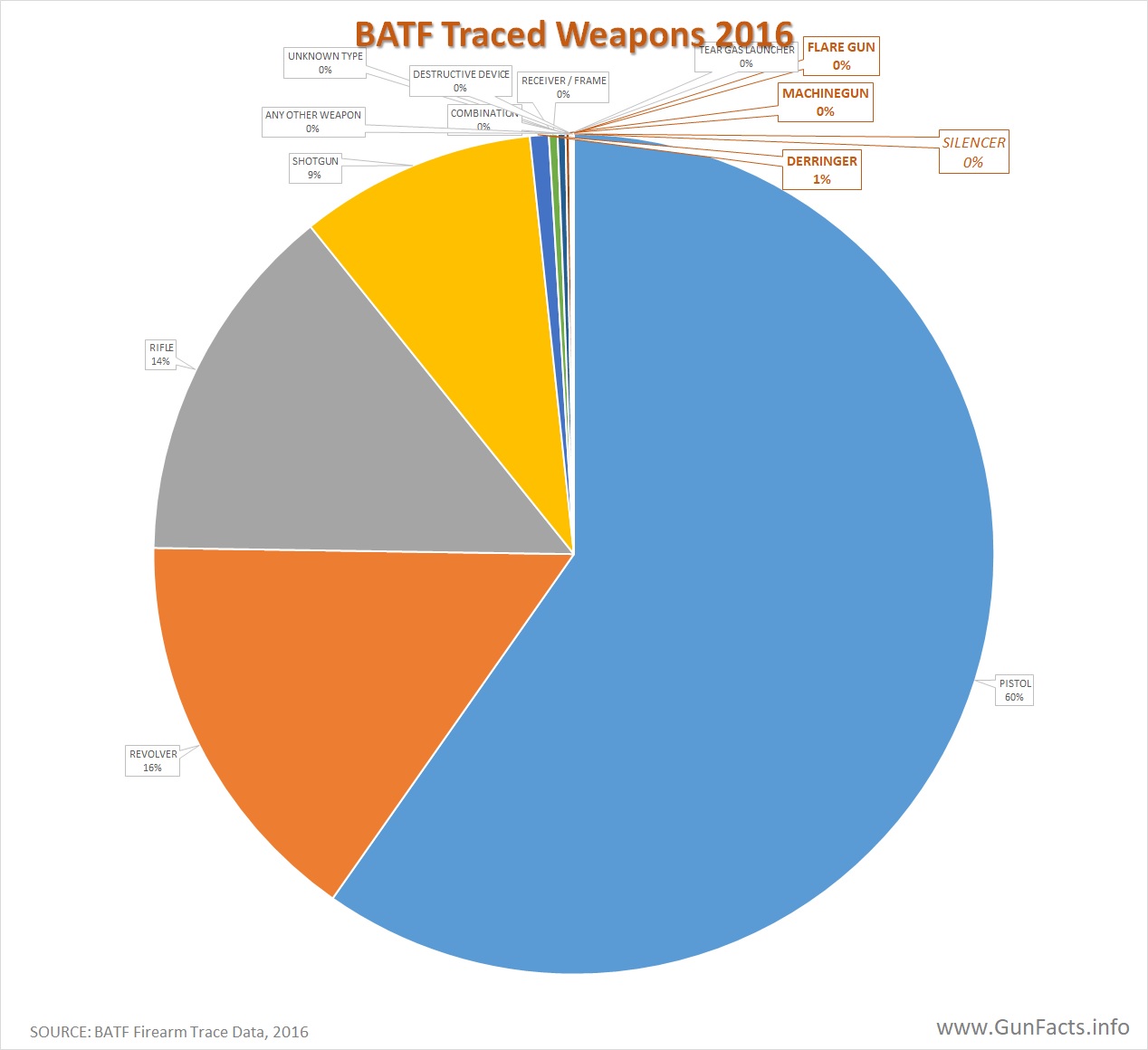 This means that only 0.01% of all suppressors were even remotely thought to have maybe been of criminal possession. The trace percentage for machineguns is 0.15% – more than 10 times as often per capita – indicating a greater rate of recovery from suspects.

This is our first clue as to why suppressors are not used very often at all in crime.

This ugly pie chart shows the 2016 BATF traces by weapon type. Of interest is the cluster of weapons types, highlighted in red, in the upper-right. We know from long-term data that these weapons are rarely used in crimes, despite millions of them being in circulation. It begs the question “What is similar about these as far as crime goes?”

The answer is cost versus utility.

That Heater Will Cost ‘Ya

Most gun crimes are street crimes. As such, there are a few very relevant factors in the choice of weapons used:

To summarize this all, for the most common forms of gun crime, suppressors add no advantage, impede concealability, and are very expensive… if you can find them at all.

The proposed bans on suppressors are none of the above.