Psaki just said the stock market doesn’t help middle and lower class families. Say that to the millennial with no job paying for $4,000 dog surgeries with GME stock

FOMC redline. No mention of Gamestop 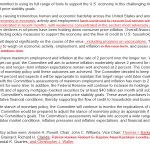 Authored by Arkady Savitsky via The Strategic Culture Foundation,

The foreign ministers (FMs) of the Baltic states have wound up their May 16-18 visit to Washington. They asked National Security Adviser John Bolton to reinforce the NATO battalions that have been deployed to their countries with air and naval units. They also want their air-defense capability enhanced. Lithuanian FM Linas Linkevicius emphasized that it’s not just the numbers that are important, but also training exercises, visits, the distribution of equipment, and the establishment of new military facilities. Latvian FM Edgars Rinkevics called for making the US military presence in the Baltic states and Poland permanent. It’s hardly a coincidence that the issue has been raised prior to the NATO 2018 summit that will take place on July 11-12.

The leaders of the Baltic states have always stressed that they see the current military build-up as only the starting point for a larger effort that will include modernized routes and infrastructure sites, as well equipping their national forces with more up-to-date weapons for offensive operations.

NATO has deployed four battalion-sized battle groups (roughly 4,500 troops) to Estonia, Latvia, Lithuania, and Poland. The nations that comprise the backbone of this force are the US, the UK, Germany and Canada. Twelve other allies also contribute to the Enhanced Forward Presence (EFP). Eight small staffs known as NATO force integration units have also been established. Common rules of engagement (ROE) are in the process of being hammered out, taking into account regional nuances. In the event of war, the Graduated Response Plan (Eagle Defender) with its own detailed ROE will come into play.

Under the European Deterrence Initiative (EDI), the US military has transferred over to Europe a 3,500-strong armored brigade combat team and a 2,200-strong combat aviation brigade that is headquartered in Germany, and a combat sustainment support battalion (750 troops) that is stationed on Polish soil to be used as a logistics hub in Romania. It has also deployed a support team to Lithuania.

In total, America now has three combat-ready brigades stationed in Europe, along with pre-positioned stockpiles of weapons systems and equipment that will allow a fourth brigade to rapidly beef up its forces to launch an attack against Russia. NATO reinforcement would also include the 13,000-strong NATO’s Very High Readiness Joint Task Force (VJTF) or Spearhead Force, which is an element of the Enhanced NATO Response Force (NRF) that would join the combat later. The NRF consists of 40,000 troops. All these forces are capable of joining the fight on short notice.

These armed corps possess an attack capability that Russia cannot ignore. Nor can Moscow turn a blind eye to the fact that NATO’s collective military boasts 3.2 million active personnel — compared to Russia’s 830,000 — in addition to the US arsenal of long-range attack systems. Germany, France, and some other allies see that as enough, but no, the Baltic states are never satisfied. They keep on begging for more. They want to fully exploit their status of “frontline states” in order to reap the political benefits.

And not only that, NATO is ratcheting up tensions by holding an increasing number of large-scale exercises right on Russia’s borders. This greatly elevates the risk of inadvertent escalation. For instance, three major exercises are scheduled to be held in the Baltic region this summer.

On June 3-15, the Saber Strike exercise organized by the US Army Europe will encompass the three Baltic states and Poland, involving over 18,000 troops from 19 countries. About 3,000 American soldiers and over 1,500 combat vehicles will travel from Germany to Latvia and Lithuania. Public roads will be used to move heavy equipment. On June 12-13, the soldiers of the US 2nd Cavalry Regiment will construct a bridge in order to cross the Neman River in Lithuania (in the Kaunas district). Their main mission is to ensure that the forces are ready to rapidly advance, not to merely defend their positions.

Eight thousand American airborne troops will land in Latvia during the Swift Response exercise, in order to train alongside Lithuanian and Polish troops. Namejs 2018 will be held from August 20 to September 2 and will involve over 9,200 Latvian forces, including the military, police, border guards, volunteer reservists, and other state institutions. They will be joined by 650 troops from the US, Lithuania, Estonia, Poland, and the Czech Republic.

All these large-scale intensive training activities will take place in the background of the planning for Trident Juncture 2018, the largest NATO exercise involving about 40,000 troops, 70 ships, and about 130 aircraft from over 30 nations, which will be deployed to central and northern Norway in October for the live portion of the event. A command post phase will be conducted in Italy. Norway does not have a shoreline in the Baltic Sea but it is a member of the Council of the Baltic Sea States.

When the construction is over, Powidz, a Polish village with a population of 1,000, will have become a NATO hub for the Baltics and all of Northern Europe. That will be the control center for the operations in the region.

Anakonda 2018, the largest event ever staged by NATO since the end of the Cold War, involving 100,000 troops, 5,000 vehicles, 150 aircraft and helicopters, and 45 warships will be hosted by Portugal this summer. This particular event will be held outside the Baltic Sea region, but it’s an important part of the bigger picture because the training activities of the bloc have been incorporated into a unified plan. It’s the vast scale that is so impossible to ignore.

All the exercises are being staged to allow the forces to hone their skills for conducting offensive operations against Russia, not for fending off attacks from trenches dug along the lines of defense. All these events are large-scale and the operational tempo is unprecedented, all of which makes the security status of Europe extremely precarious.

Nothing is working to ease the tensions. The agreement on the Prevention of Incidents at (INCSEA) and the Agreement on the Prevention of Dangerous Military Activities (DMA) seem forgotten and dust-covered. No one appears to remember they even exist. Incidents and dangerous activities take place regularly, especially during exercises. The agreements do nothing to prevent them.

In 2016, then-German Foreign Minister Frank-Walter Steinmeier proposed arms control discussions to defuse tensions. Russia welcomed the idea but the initiative ended up more or less swept under the rug. Moscow has proposed updating the risk-reduction procedures envisaged under the Vienna Document (Chapter III), but the alliance rejected the idea of direct Russia-NATO talks. It wants discussions to be held under the auspices of the OSCE, which makes no sense. It’s NATO, not the OSCE, that Russia has security problems with. It’s the North Atlantic Alliance, not the OSCE, that holds provocative military exercises near Russia’s borders while painting it as the state that harbors aggressive intentions. NATO has rejected Russia’s initiatives to reduce the risk of incidents, including in the Baltic region.

These exercises, which are in truth provocations, in addition to the longing of the Baltic nations to acquire the status of “frontline states,” the absence of any Russia-NATO dialog aimed at addressing security issues, the creation of the bloc’s infrastructure to launch offensive operations (an issue that has been kept out of the media spotlight), and the growing American presence inside states that share with a common border with Russia — all these developments are fraught with dire consequences. To a large extent, NATO is responsible for the present state of affairs and the Baltic states have greatly helped to turn northern Europe into a real hot spot.