Escobar: The Empire Is Not Done Torturing Afghanistan https://www.zerohedge.com/geopolitical/escobar-empire-not-done-torturing-afghanistan

South Korea Is Revamping A Push For Nuclear Energy To Meet Its Emission Targets https://www.zerohedge.com/markets/south-korea-revamping-push-nuclear-energy-meet-its-emission-targets

Is The Chinese Yuan Beginning To Chip Away At Dollar Dominance? https://www.zerohedge.com/geopolitical/chinese-yuan-beginning-chip-away-dollar-dominance

Authored by Jeffrey Tucker via The American Institute for Economic Research,

This is a remarkable story of how the best-laid plans produced results that no one anticipated, with profound consequences for the Democratic Party. 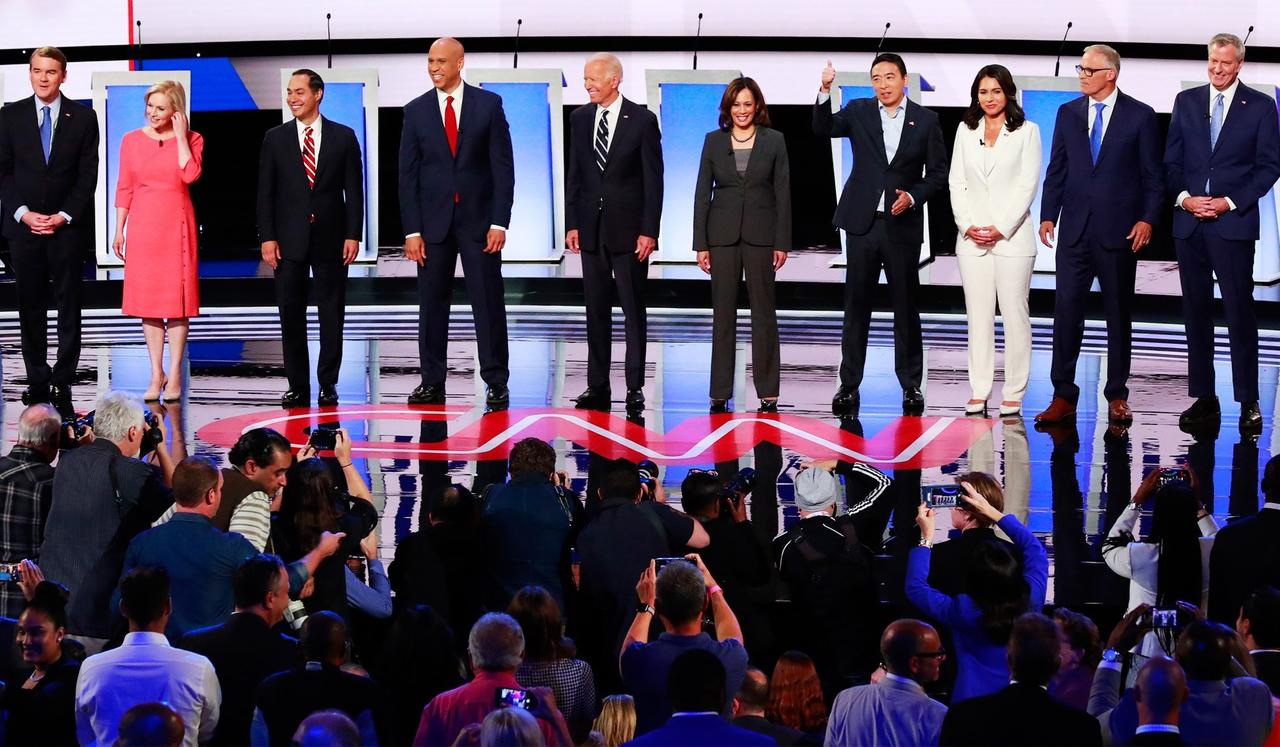 For many viewers in television land, the spectacle has been bizarre. The 20 or so contenders for the Democratic nomination have not only become outlandishly left-wing (“Left vs. Crazy Left,” as Kimberley A. Strassel says). It’s worse: they’ve been performing in ever stranger ways: shorter soundbites, edgier clips, and punchier attacks, with be-bop-style delivery. It’s almost like they are trying to get a five-second Twitter video to go viral, something to rile up lefty activists so the stuff will spread as far and wide on social media as possible.

It seems that way because it is that way.

Gone are the days of town halls in Iowa – you know, sitting around the diner talking with the locals about how great corn subsidies are. Now the contenders spend all their time in Washington and New York in rehearsal practicing couplets in front of consultants, so they can make a splash on national news between the debates.

It seems almost like they have all given up on coherence and rationality, to say nothing of normal good sense. Listening to their rhetoric, there is nothing government can’t do if we just give this one person power to overthrow the capitalist system. Up with taxes, down with the wealthy, onward with central planning, out with fossil fuels, to heck with private provision of medical services.

This whole trajectory is not what one would predict in a country that in general tends center right in its political outlook. As Scott Rasmussen notes,

Only 18% of voters share Warren’s enthusiasm for banning private health insurance companies. Only 26% think illegal immigrants should receive health care subsidies from the federal government. Fewer than one-in-five believe the threat of climate change makes it necessary to give the federal government sweeping new powers to control the economy.

You would think that politicians would try not to favor ideas vast majorities reject. What are these candidates thinking? What’s going on here? Surely the high-end professionals running these campaigns know that they can’t win in the general election this way.

For me, the mystery lasted until I heard the New York Times podcast on August 2, 2019. It made some sense out of nonsense. It zeroed in on the way a number of forces have combined to drive the party to far-left extremism. It’s a case study in how bad rules lead to perverse outcomes.

The thesis is as follows.

First, the media-driven political culture – on the march for half a century – has made the debates everything that matters. That’s the first condition to understand by way of explanation. This is a necessary condition, but it is not a sufficient one.

Second, the Democratic National Committee is trying not to repeat the 2016 perception that the fix was in with the selection of Hillary Clinton. That really rubbed many activists the wrong way. Plus, it didn’t work. Despite a 90-plus percent chance of winning, Clinton lost. So the party wanted a very clear presentation of an open forum. Come one, come all!

Third, and as a result, far more candidates threw a hat into the ring than was expected, which meant that they had to cap the number at 20 and further allocate television time; hence, the seemingly rational rules for qualification. They had to create a rationing system based on broad support.

“There are two paths to qualifying for the debate stage: breaking 1 percent in three polls from pollsters approved by the Democratic National Committee, or tallying 65,000 unique campaign donors, with at least 200 donors in 20 different states.”

Grass roots! Organic support from people from many states! What could go wrong?

Instead of finding supporters in early primary states by going door-to-door, the candidates instead were forced to run a national campaign of small donors. But it takes a lot of money to buy the necessary social media ads to push people into donating $1 to qualify as a real donor.

This meant seeking huge donors to fund expensive ad buys. They pay on average $70 to get a $1 donation from as many people as possible. Who gives $1 to a candidate: you guessed it, the extremist activists who just happen also to be financially poor, also known as The Twitter Mob. In order to get them to throw a buck at you, you need to inspire silly activists, as many as possible. That in turn means that you have to reduce your campaign to silly slogans activists like in order to get their attention.

Then on top of that, the standards keep tightening as the debates go on. There are so many candidates that they only get one minute. So their soundbites have to be extra catchy to be broadcast the next day on as many channels as possible in order to maximize more $1 contributions. This means they have to attack each other ever more, from the left, left, left, in order to get the goofballs to open their wallets.

Hence a rational candidate from a place like Montana with no national media following is toast from the very outset. This means, under these rules, there will be no more Carters, Clintons, or Obamas. They were all outsiders without a national name until they performed well in the primaries. That system has been blown up, all because of a strange voting rule designed to allocate television time.

This is a remarkable case of how a hastily drafted voting rule unintentionally drove the whole Democratic field to a wacky level of ideological extremism that nearly guarantees they will lose a national election. Everyone knows it, most everyone is against it, but no one can stop it.

Here is a classic example of the unintended consequences of a seemingly well-constructed plan. What happened? The opposite of what was intended. Lots of small donors require a handful of large donors to fund ad buys. A national base excludes local focus. This national base must be inspired by zippy-wild left-wing ideas. Hence the hoped-for moderation inadvertently turned into a competition between people moving ever further left without limit.

In other words, these seemingly rational rules – combined with a media-driven campaign – resulted in the very inverse of what the planners wanted. With some sympathy toward those who made this mess, I’m sure I couldn’t have anticipated these results. No one did.

Think of it this way. The smart guys at the Democratic National Convention were trying to structure a quasi-market out of candidate popularity, a foolproof system to cause the most meritorious candidates with the best ideas with the broadest appeal to rise to the top. Instead the system blew up and fell apart, leaving a pack of wackadoodles dancing to socialist teen-pop in the hope of getting one-dollar bills thrown at them by a Twitter mob.

But now it is too late. Moderate candidates with complex answers who might have stood a chance of being a rational alternative to the GOP ticket are already toast. And we are left with a slate of candidates easily painted as our own Red Guard.

And there are ten more debates to go!

As for the Democratic National Committee, these are certainly not the people who are likely to succeed at designing and managing an entire economy – not when they can’t figure out how to design and manage a primary campaign just to get the party nomination.